Turkey hopes that more muscular foreign policy moves in the Gulf and Africa will help neutralize increasing pressure from a Russia-led alliance. 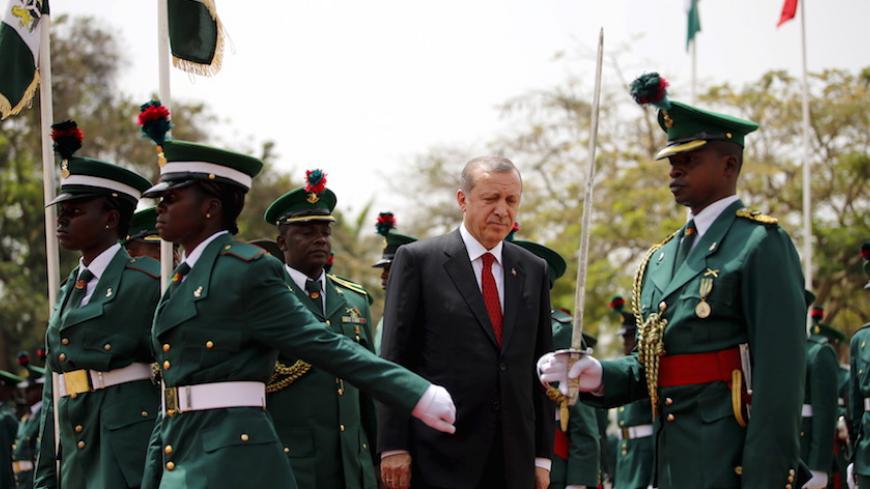 Amid President Recep Tayyip Erdogan's recent West African tour, from Feb. 28 to March 4 and including visits to Ivory Coast, Ghana, Nigeria and Guinea, news reports surfaced of Turkey establishing a military presence on the strategic Horn of Africa, in Somalia. This development will make Turkey the fifth foreign country to have a military presence in Africa, joining Britain, France, Japan and the United States.

According to the reports, carried extensively by the pro-government media under such headlines as “New Turkey Spreads to Four Continents,” a training mission requested by the Somali government will prepare the national army to take on al-Shabab, the terror organization that attacked the Turkish Embassy in Mogadishu in 2013. In this regard, Turkey will provide elite military training on counterterrorism, border security, force protection and small unit action.

Turkey’s interest in Africa is nothing new. After Ankara declared 2005 the Year of Africa, the continent quickly become one of the pillars of Turkish foreign policy. That year was the first time a Turkish prime minister visited Ethiopia and South Africa, and on April 12 that year, the African Union granted Turkey observer status.

In August 2008, a Turkey-Africa summit brought high-level representatives from 49 African countries to Istanbul. In addition to being an important indicator of Turkey’s economic opening to Africa, the summit also garnered African support for Turkey being elected as a UN Security Council non-permanent member (2009-2011), with 51 out of 53 African countries voting in favor.

In November 2014, six years after the first Turkey-Africa meeting, Equatorial Guinea hosted a similar gathering at Malabo that brought Erdogan together with leaders of 30 African countries to discuss new areas for partnership. The final communique declared that a Joint Implementation Plan for the period 2015-2019 had been approved. According to the plan, projects in education, health, infrastructure and energy were to be undertaken. The third summit is scheduled to be held in Istanbul in 2019.

The volume of trade between Turkey and Africa continues to grow. In 2002, it stood at $3 billion and now exceeds $25 billion annually. In addition to trade, extensive humanitarian activities by the Turkish Cooperation and Coordination Agency stand out, especially in the field of health. Turkey has health cooperation agreements with 20 African countries. In regard to education, the Scholarship for Turkey is the most popular such program among African university students, 29,000 of whom applied in 2015.

After 2012, Turkey’s interest in Africa expanded beyond trade, humanitarian assistance, health and education, taking on a more “muscular” approach. For example, as reported in Al-Monitor in October 2014, the Turkish navy’s Barbaros Naval Task Force sailed the entire African coastline, visiting 25 ports in 24 countries, including Somalia, 19 of them for the first time. With this mission, the navy’s most impressive in recent years, Turkey for the first time used its military as an instrument of foreign policy. The mission was planned and realized through close cooperation between the military and civilian bureaucracies in Ankara and is considered a foreign policy success in which soft and hard power elements worked jointly.

Why does Ankara favor muscular foreign policy moves, which are becoming an important area of cooperation on which three major actors — civilian-political decision-makers, Justice and Development Party (AKP) elites and the military — agree? Military-oriented foreign policy openings have become a major domestic political tool for Turkey's political leaders and AKP elites, which have a conservative nationalist constituency. For the part of the Turkish population proud to be identified as a “soldier’s nation,” such moves by Turkey are in line with the AKP's slogan “For a New Greater Turkey.” Moreover, muscular foreign policy initiatives allow the AKP government some breathing space from the Syrian crisis, continuing clashes in the southeast with the Kurds and endless debate about a constitutional amendment to create a presidential system of government.

Sending the Turkish military abroad could bring about an organizational transformation of the force. Through international missions, the Turkish Armed Forces (TSK) gain valuable military experience in the creation of various task forces and joint operations that combine the elements of its army, air force, navy and special forces. The TSK has in addition been accumulating operational experience in supporting international peacekeeping and combating global terrorism and naval piracy. The TSK task forces and missions provide welcomed extra income (paid for service abroad) while encouraging military personnel to learn foreign languages and improve or develop other qualifications to be assigned to such missions.

After 2010, the TSK began paying special attention to its internationalization, aiming to cooperate more closely with other militaries and increase its visibility in the global arena. TSK has thus far signed military cooperation agreements with 68 countries and is in the process of negotiating such agreements with 41 others. In 2009, foreign military personnel in Turkey for training and professional courses numbered 1,278, and in 2015 their number had increased by 270%, to 3,355. In 2009, Turkey had 53 military attaches abroad, and in 2014 their presence had risen by 52%, to 81. Also of note, Turkish defense industry exports increased by 98%, from $832 million in 2009 to $1.65 billion in 2014.

These types of military-oriented foreign policy openings provide the prime minister's office and ministries such as foreign affairs, health and education with long-term opportunities to identify mutually beneficial fields for cooperation and trade with other countries. In short, establishing a military presence and other methods of military cooperation are important instruments for creating and developing bilateral ties that in time can be complemented by soft power activities in the defense industry and health, education and cultural arenas.

Of course, there are also geostrategic benefits of a muscular foreign policy. Since 2015, Ankara has been under political, military and economic pressure from the Russian-led alliance of Armenia, Iran, Iraq and Syria. Turkey is now hoping to neutralize these pressure through a muscular foreign policy. Its level of military cooperation has been steadily rising in the Caucasus, with Georgia and Azerbaijan; in Africa, with Kenya, Ethiopia and Zanzibar; in the Gulf, with Qatar, Oman and Saudi Arabia; and in the Balkans, with Macedonia, Albania, Kosovo and Bosnia. Nobody should be surprised to hear reports of Turkey establishing a military presence in these countries. Today muscular foreign policy moves are Ankara’s pet projects.