Turkey is using its navy to display its global prowess, after the Sledgehammer trials saw many naval officers detained and forcibly retired. 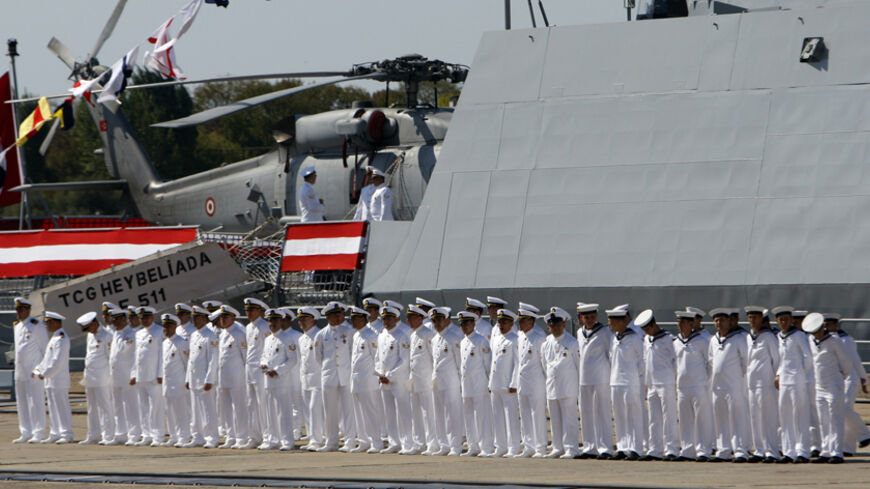 The last 10 years have been a struggle for survival for the Turkish navy. Many senior naval officers, including admirals, have been detained and imprisoned on a variety of charges. Purge-like arrests of naval personnel started with the so-called Sledgehammer case at the beginning of 2010, which saw 13 serving admirals detained and forcibly retired. In the Sledgehammer case, 365 military personnel, 250 of whom were detained, were put on trial. The case concluded with the sentencing of the navy officers, including 25 admirals who are now retired, to 12-20 years in prison. The Sledgehammer trials were followed by the Poyrazkoy case mid-2010.

Five more naval officers were arrested on charges of buried weapons discovered at Poyrazkoy, which was followed by arrests of 17 senior officers on charges of “an assassination attempt against the commander of the navy.” The indictment included a charge that a bomb would be set off on a submarine that was on exhibit at the Istanbul Koc Museum, to create chaos, and 33 senior officers were detained on these charges. Subsequently, 10 naval officers of the Golcuk Fleet Command Intelligence Unit were brought to court on charges of incriminating documents discovered. Finally, 56 naval personnel were tried on charges of prostitution and spying in Izmir.

Of about 3,500 Turkish Armed Forces (TSK) military personnel brought before a judge in the last 10 years, 1,857 of them — more than 50% — were naval personnel. Of 50 admirals serving at the Naval Forces Headquarters, 15 were arrested after the trials and all were forced to retire, and of 750 colonels about 120 met the same fate. The total number of soldiers detained in these proceedings — 3,500 in all — constituted about 10% of the entire officer cadre of the TSK.

Why was the Turkish navy the prime target of this massive purge?

Naval Infantry Col. Dursun Cicek, one of the key victims of several cases, said, “The Turkish navy had views that contradicted Israel and the United States on issues such as nationally built warships, national weaponry, and Black Sea and Mediterranean policies. This is the real cause of what happened to the Turkish navy.”

According to Gen. Ilker Basbug, former chief of the Turkish General Staff, the goal of the Sledgehammer case "was to weaken" the Turkish navy and to cripple Turkey’s power in the Mediterranean and the Black Sea.

There were people in the government who also believed that Sledgehammer was a plot. For instance, according to Justice and Development Party (AKP) Vice Chairman Huseyin Celik, "To think Sledgehammer didn’t exist is to fool ourselves and to insult the intelligence of our people. The Sledgehammer plan of action was an outright plot attempt.”

Although the debate on cases and investigations that implicated Turkish naval personnel still continues, the Turkish navy was able to overcome this trauma in a relatively short time. Since January, the navy has been making a major effort to revive itself and its self-confidence — an effort that is supported by political decision-makers. The best example of this changing atmosphere was sending the Barbaros Turkish Maritime Task Force of four frigates on a 102-day mission (March 17-June 27, 2012) that brought the Turkish navy to Cape Hope for the first time in 102 years — a journey that had two Turkish-made frigates, one corvette and one logistics vessel sail to 25 ports in 24 African countries, including to Somalia for the first time.

During the ceremony welcoming back the task force, the words of the commander of the Turkish navy, Adm. Bulent Bostanoglu, were noteworthy: “These activities will contribute significantly to display the capabilities the Turkish navy has acquired, to deepen bilateral relations and establish new relations and assist the African countries in augmenting their capacities for naval security.”

The Turkish navy had defined the mission of the Barbaros Task Force as follows: show the flag and establish presence in world seas to support Turkey’s foreign policy; contribute developing relations with African countries and help establish new relationships; have a say in international platforms of naval operations; combat naval banditry; support NATO’s Operation Active Endeavor in the Mediterranean; conduct high-altitude ballistic missile firing; and assist the efforts of the Turkish defense industry to promote their products.

Another interesting feature of this naval mission was that it did not limit itself to military issues. For the first time, the Barbaros Task Force promoted Turkey's soft power in the African ports they visited, while distributing aid supplied by Turkey’s Ministry of Health, the Prime Ministry’s Turkish Cooperation and Coordination Agency and nongovernmental organizations. The public was offered access to medical clinics and training in emergency medical care was given. The naval mission also provided an opportunity for 19 new Turkish embassies in Africa to present themselves. In the ports, military and civilian officials were available for conversation, ships were open to the public and well-attended receptions were organized on the ships.

In 2015, the Turkish navy is preparing for a naval mission to the Far East that will end in Japan with six ships, which will include two Turkish-made frigates.

Bostanoglu said in a statement that the navy now has 134 combat and auxiliary ships, 50 aerial vessels, as well as amphibian naval infantry battalions and underwater attack-defense and rescue teams to defend the rights and interests of countries in close proximity to the sea.

What do the political decision-makers, who until two years ago had been silenty watching the legal offensive against the navy, now think of the navy’s accomplishments? The answer to this is part of a concept that can be best described as "AKP’s pragmatism." For instance, then-Foreign Minister Ahmet Davutoglu, who had kept silent during the trials, visited the Barbaros Task Force in Tanzania. In a speech there, he said Turkey was one of 10 countries that operate in the world's seas. He said, “Turkey is on its way to becoming a global force. Our goal is to make Turkey a global force on the 100th anniversary of our republic with its diplomacy, economic and military power. We want to see our navy and military capacity in the top 10 of the world.”

There are two basic reasons why Turkey’s political decision-makers have increased their support of the Turkish navy’s efforts to display itself on the global scene. The first is to bolster the “New Turkey” vision in domestic politics by using the Turkish navy as an element of self-confidence. The second is the Turkish navy emerging as an instrument of hard power that could well augment the soft-power elements of the foreign policy of “New Turkey.”