A possible deal to end the US-Turkish row over an American pastor detained in Izmir appears to have failed after President Recep Tayyip Erdogan heaped additional demands on an agreement. 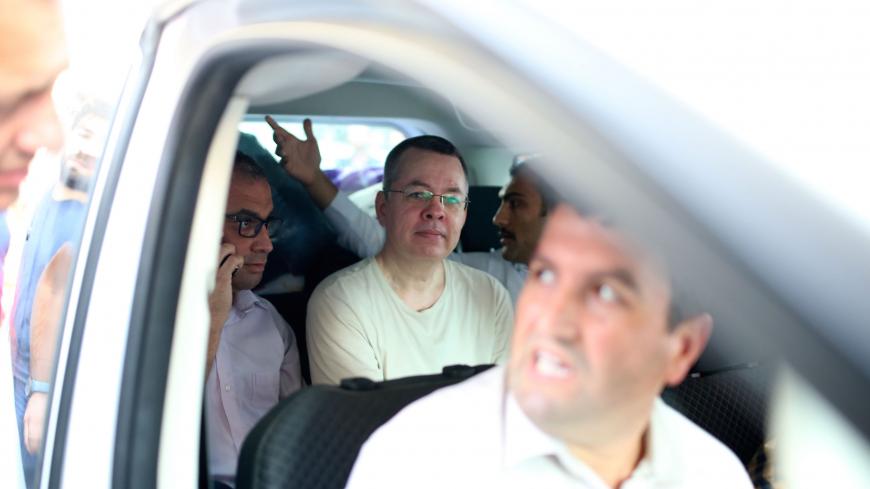 US pastor Andrew Craig Brunson (C) is seen inside a car escorted by Turkish plainclothes police officers as he arrives at his house on July 25, 2018, in Izmir. - GETTY

Foreign Minister Mevlut Cavusoglu has added to the Turkish government’s defiant rhetoric in the face of US sanctions over a detained North Carolina pastor, Andrew Brunson, who has become a lightning rod in the souring relationship between the two NATO allies.

Speaking at an Aug. 4 gathering of the ruling Justice and Development Party (AKP) in the Mediterranean resort of Antalya, Cavusoglu said, “If you impose sanctions, you will be confronted with sanctions. What can you achieve with threatening language?”

Cavusoglu’s comments coincided with vows by President Recep Tayyip Erdogan to retaliate in kind following the US Treasury’s move to freeze the assets of Turkish Justice Minister Abdulhamit Gul and Interior Minister Suleyman Soylu in keeping with sanctions under the Global Magnitsky Act, targeting corruption and human rights abuses.

“Those who think that they can make Turkey take a step back by resorting to threatening language and absurd sanctions show that they do not know the Turkish nation,” said Erdogan, who also appeared to shift blame for the escalation to Vice President Mike Pence. On July 26, Pence had become the first US official to openly threaten sanctions against Turkey over Brunson's continued detention.

President Donald Trump then echoed Pence's remarks via Twitter, remarking that Turkey would face “large sanctions.” At an Aug. 4 meeting of the AKP in Ankara, Erdogan said, “Trump has been played, and I know very well who played him. Mr. Trump should disrupt this game.”

The Turkish belief is that Pence is using Brunson to shore up the evangelical base ahead of midterm elections. “This goes to show just how ignorant [Turks] are about how our system works,” a US official told Al-Monitor, speaking on the condition of anonymity. “Most people in this country have never even heard of Brunson.”

Washington has threatened additional measures unless Brunson is freed. He has been held in the Western province of Izmir since October 2016 on dubious espionage and terrorism charges.

The Turkish lira took a further hit Aug. 6, slumping to record lows against the US dollar following the Trump administration’s announcement that it was reviewing Turkey’s duty-free access to the US market under the Generalized System of Preferences Program. The move could affect some $1.66 billion worth of Turkish goods, Reuters reported.

The Office of the United States Trade Representative is weighing the measure in response to Turkey’s retaliatory tariffs on US goods. These were adopted in response to American tariffs on steel and aluminum as part of a broader trade war. US officials say the measures being considered are not connected to the Brunson affair.

Turkey's conspiracy-addled pro-government media wasted no time in blaming the plight of the lira on the alleged “foreign exchange lobby” bent on “destroying our national economy.” Economists point to Erdogan's refusal to let the Central Bank raise interest rates as one of the immediate causes of the meltdown.

Cavusoglu claimed at the AKP meeting that Ankara “hadn’t even heard of” the evangelical preacher until the US Embassy in Turkey requested consular access to him. Cavusoglu added that Brunson had been detained following criminal complaints filed against him by his translator and “certain people.”

The foreign minister's remarks were clearly intended to debunk charges that Brunson is being held as a bargaining chip to wrest concessions from Washington. Cavusoglu confirmed, however, that talks were ongoing with the United States over state-lender Halkbank, which the Treasury is expected to slap with a multibillion-dollar fine for its central role in laundering Iranian assets in violation of US sanctions against Iran.

He also confirmed that senior Halkbank executive Mehmet Hakan Atilla, convicted and sentenced to 32 months by a New York federal court for his link to the scheme, figured in the discussions. According to multiple media reports, a proposed deal to swap Brunson for Atilla and a reduced fine on Halkbank fell through at the last minute when Erdogan came up with additional demands.

Cansu Camlibel, Hurriyet's Washington correspondent, reported Aug. 3 that Ankara had sought the scrapping of new investigations being conducted by the Treasury’s Office of Foreign Assets Control and the federal court for the Southern District of New York, where Atilla was tried. Camlibel’s piece mysteriously disappeared from Hurriyet’s home page, prompting speculation that her story must have been accurate.

The daily Cumhuriyet claimed Aug. 5 that the deal to swap Brunson had been revived. The pastor would be allowed to return home first, and Atilla would then be flown home to serve out the rest of his sentence at a later date, pending bureaucratic procedures that need to be completed.

Secretary of State Mike Pompeo sounded an optimistic note Aug. 4 following a meeting with Cavusoglu in Singapore on the sidelines of a regional conference. “I made clear that it is well past time that pastor Brunson be freed,” Pompeo said. “I am hopeful that in the coming days that we will see that occur.”