A Turkish delegation has been dispatched to Washington to try to resolve the crisis swirling around the detention of American pastor Andrew Brunson in Izmir. 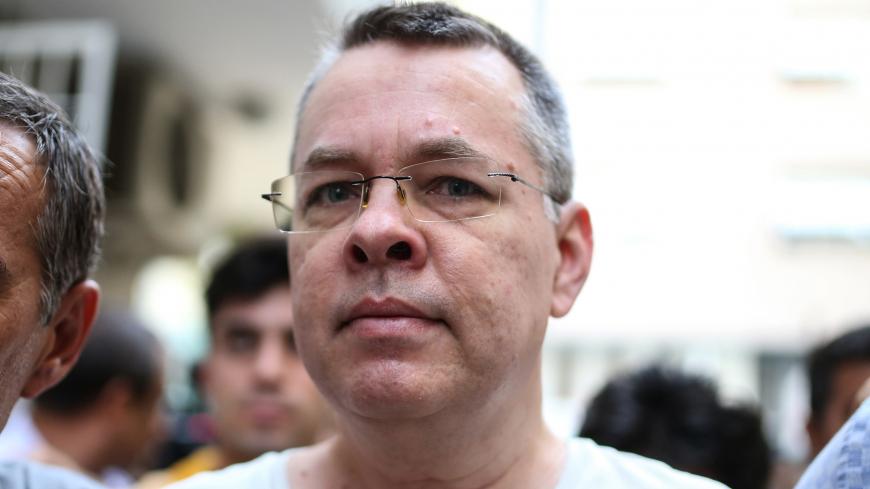 A Turkish delegation of senior diplomats, legal experts and Treasury officials is expected to arrive in Washington in a bid to defuse the ongoing crisis between the NATO allies sparked by the continued detention of North Carolina evangelical pastor Andrew Brunson.

The delegation, led by newly appointed Deputy Foreign Minister Sedat Unal, was scheduled to land Aug. 7. The State Department meanwhile confirmed that Secretary of State Mike Pompeo had today spoken by phone with his Turkish counterpart, Foreign Minister Mevlut Cavusoglu, but there was no readout of the conversation.

Amid mounting panic about the effects of the row on Turkey’s fragile economy, the Turkish lira dropped by a record 5% against the US dollar Aug. 6. Mahir Unal, a spokesman for President Recep Tayyip Erdogan’s ruling Justice and Development Part, played down the meltdown, insisting that it stemmed from broader global economic instability.

But many economists disagree warning that if the backsliding goes unchecked, with a sharp rise in inflation, the current account deficit and foreign currency denominated debt, Turkey may be in need of a financial bailout from the International Monetary Fund.

Some Turkish commentators believe that Erdogan's uncharacteristically moderate response to the US sanctions imposed against Justice Minister Abdulhamit Gul and Interior Minister Suleyman Soylu over their role in Brunson’s incarceration indicates his desire to avoid further escalation. Erdogan called the measures “disrespectful” and “irrational.”

Writing in the daily Hurriyet, Sedat Ergin argued, “By strongly embracing the concepts of strategic alliance and NATO partnership [between Turkey and the United States], Erdogan is proposing that relations be mended on this basis.” Ergin also pointed to Erdogan's keenness to absolve President Donald Trump by saying he was “played” and to pin all the blame on Vice President Mike Pence, who was the first to threaten sanctions against Turkey.

Such analysis fails, however, to explain why Turkey still hasn't freed Brunson and other US citizens being held on similarly suspicious terror or espionage charges, especially given the vast powers Erdogan wields.

Indeed, Western analysts are skeptical of further talks making a difference, unless Turkey bows to US demands to free Brunson, who is facing trial in a Turkish court. Washington’s patience is wearing thin, as suggested by the US Treasury's Aug. 1 decision to hit Gul and Soylu with Magnitsky Act-inspired sanctions.

Speaking to Al-Monitor, Nicholas Danforth, a senior analyst at the Bipartisan Policy Center’s national security program in Washington, said, “Instead of sending a delegation, why not just send Brunson?”

He further noted, “Of all the battles to pick with Washington, Ankara has settled for the one that will most effectively unite Washington against them and has in the process done as much damage to the Turkish economy as any of the measures against Halkbank they were trying to pre-empt.”

Regarding Halkbank, Danforth was referring to Turkey’s efforts to lower an expected multibillion-dollar US Treasury fine on the state-owned lender for helping Iran evade US sanctions. Turkey had reportedly wrested this concession from the Americans, along with pledges for a convicted senior Halkbank executive’s extradition, in exchange for Brunson. It remains an abiding mystery why Turkey allowed the deal to collapse at the last minute. Media reports suggest that Ankara wanted further investigations against Halkbank to be dropped.

Wolfango Piccoli, the co-president of Teneo Intelligence, a risk consultancy firm, tweeted, “I struggle to see how a Turkish delegation led by a deputy foreign minister (who is not an AKP political heavy weight & was appointed yesterday) can achieve much in its meetings in DC re. Brunson issue.”

Republican Sen. Lindsey Graham of South Carolina, who has been spearheading informal talks with Ankara to secure Brunson’s release, said the Trump administration was reviewing further sanctions against Turkey. In comments reported in the Independent Mail, Graham said, “What I want to do is to make sure that the sanctions we have on the table today are never implemented. We need to stand down.”

Graham is the chairman of the Senate subcommittee overseeing the appropriations bill dealing with a proposed freeze on F-35 fighter jets to Turkey because of its continued detention of US citizens, including Brunson, as well as Ankara's plans to acquire Russian made S-400 missiles.

The senator met with Erdogan in late June and is believed to have struck up a good relationship with him. Graham also has Trump’s ear and spent Aug. 5 golfing with the president at his club in New Jersey. Graham's own efforts to resolve the crisis have also obviously come to naught.

A glance at the Aug. 7 headlines across Turkey's government-dominated media suggests there is no crisis. Hardly any of them mention the lira’s dramatic fall the previous day. Instead, they spout new conspiracies about the United States' evil designs on Turkey.

Yeni Safak’s top story focuses on a certain “John,” who supposedly authored a statement delivered by the putschists on the night of the failed July 2016 coup. The newspaper speculates that he is either former US Ambassador to Turkey John Bass or Col. John Walker, the former commander of US forces stationed at Incirlik Air Base. It plumps for the latter.

The daily Star reports that the street outside the house in the western port city of Izmir where Brunson has been moved to is teeming with CIA and Mossad spies. Not to worry, however, Turkish police are tracking their every move, the newspaper assures its readers.