Erdogan sneers at Trump as Turkey lines up new friends

Turkish President Recep Tayyip Erdogan lashed out at US President Donald Trump in what some analysts say is a bid to scapegoat the United States for an impending economic collapse, but he's more likely motivated by the ongoing probes into Turkey's Halkbank. 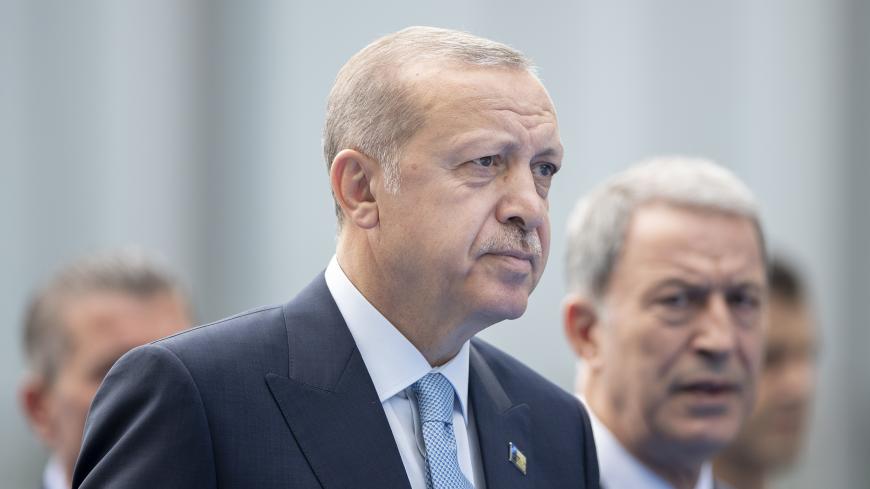 Turkish President Recep Tayyip Erdogan took aim at US President Donald Trump over Turkey’s currency crisis today, in a clear break with his government’s earlier policy of keeping the American leader out of tensions with the United States.

Trump announced Aug. 10 via Twitter that the United States would be doubling steel and aluminum tariffs for Turkey “as their currency, the Turkish Lira, slides rapidly against our very strong Dollar!” Erdogan said in response, “You might be the president. But you can’t out of the blue say, ‘I’ve imposed this and that tariff on steel and aluminum.’” Speaking at a gathering of Turkish ambassadors, Erdogan, suggested that Trump, not Turkey, stood to lose: “On the one hand you are a strategic partner; on the other you shoot yourself in the foot.”

Erdogan showed no signs of backing down from the crisis triggered by Turkey's continued detention of North Carolina pastor Andrew Brunson. He asserted that Turkey was “under siege” by “global bullies” eyeing Turkey’s hard-fought gains. “Turkey is too big and influential a country to be condemned to a single axis. With this in mind, we are seeking to deepen our ties with BRICS, the African Union and ASEAN-style regional groupings,” he said, referring to Brazil, Russia, India and China and the Association of Southeast Asian Nations.

ln a bid to stem the lira's hemorrhaging, the Central Bank pledged Aug. 13 to provide “all the liquidity the banks need.” Reuters reported that the Central Bank would meet banks’ lira liquidity needs at an overnight rate of 19.25%. Reuters quoted bankers as saying it could be a first step toward tightening monetary policy by using an interest rate corridor.

Most economists argue than an outright hike in the benchmark rate is an urgent and necessary step to restore market confidence. But Erdogan remains deeply opposed to a rate hike that would, as he sees things, raise inflation and kill construction-fueled growth, which has hugely enriched his business cronies. Since winning the June 24 elections, Erdogan has tightened his grip over the Central Bank further, eroding market confidence. Inflation has leapt to over 15%, a 10-year high, and ordinary citizens are feeling the pinch.

Some analysts suggest that Erdogan is deliberately stoking tensions with the United States in order to scapegoat the latter for an economic collapse that was already in the making. But his intransigence is more likely driven by ongoing probes against Turkish state lender Halkbank that according to Turkish media reports are being conducted by the US Treasury and the Southern District Court of New York.

Erdogan has allegedly insisted that in exchange for Brunson, the probes be dropped. He also allegedly wants an anticipated multi-billion-dollar Treasury fine against Halkbank for its role in evading US sanctions against Iran to be scrapped as well. Last year, the same court indicted Turkish Iranian gold trader Reza Zarrab and former Turkish Economy Minister Zafer Cagalayan for their roles in the illicit dealings.

In May, the court sentenced imprisoned Halkbank senior executive Mehmet Hakan Atilla to 32 months for his complicity in the massive money-laundering scheme. Zarrab, who pleaded guilty, cooperated as a witness for the state.

The United States reportedly offered to let Atilla serve out the rest of his term in Turkey once bureaucratic hurdles to his extradition were cleared. But in what now seems like a gross miscalculation, Erdogan held out for more.

Meanwhile, Kuwait's national news agency KUNA carried an official denial of claims that Erdogan’s son-in-law and Economy Minister Berat Albayrak is in Kuwait to raise capital to shore up the sagging lira. It confirmed that Kuwait's Finance Minister Nayef Al-Hajraf met with Albayrak at Kuwait International Airport on Sunday evening. KUNA asserted, however, that reports that Kuwait had injected $1.6 billion into the Turkish economy to back the lira were "ungrounded."

The lira has shed 40% of its value since the start of the year. On Sunday, Albayrak rejected speculation that Turkey would resort to capital controls. “Our currency was directly targeted by the American president,” he added. Erdogan also rebutted the rumors. “Turkey will never compromise on the principles of a free market economy,” he said.

The United States is reportedly weighing further sanctions against Turkey, potentially targeting senior Turkish officials, if Brunson is not freed, the Wall Street Journal reported Aug. 8. The opening shots came on Aug. 1, when the US Treasury froze the assets of Turkey’s justice and interior ministers in the United States in line with Global Magnitsky Act, under which sanctions have been leveled against human organ traders, arms smugglers and other criminals.

The move came after Trump reportedly asked relevant government agencies including the State Department to draw up a menu of possible sanctions, Gonul Tol, the executive director of the Middle East Institute’s Turkey program told the independent Medyascope TV. Trump is said to feel personally and viscerally affronted by Turkey’s refusal to free the pastor after he secured the release of Turkish activist Ebru Ozkan by Israel.

Brunson has been held since October 2016 on flimsy terror charges and faces up to 35 years if convicted.

Sources familiar with the US president’s thinking assert he is determined to keep up pressure with little regard for the impact on over half a century of strategic ties with Turkey. “The relationship is now out of the hands of those [US officials] who traditionally manage it,” a congressional source speaking on condition of strict anonymity told Al-Monitor.

One such official is Mathew Palmer, who was expected to begin his new assignment soon as US Deputy Assistant Secretary of State in the Bureau of European Affairs who will be responsible, among other countries, for Turkey. An expert on the Balkans, Palmer was most recently director for South Central European affairs at the State Department. According to his LinkedIn profile, Palmer is the author of four award-winning novels published by Penguin Random House “featuring American diplomats as protagonists.” Palmer’s dealings with Turkey may well provide him with fresh inspiration.