When a US federal agent spoke publicly about the investigation into a Turkish-Iranian sanctions-busting scheme and verified rumors that Turkey had tried to get the defendants freed, she confirmed Ankara's fear that more fallout from the scandal is still to come. 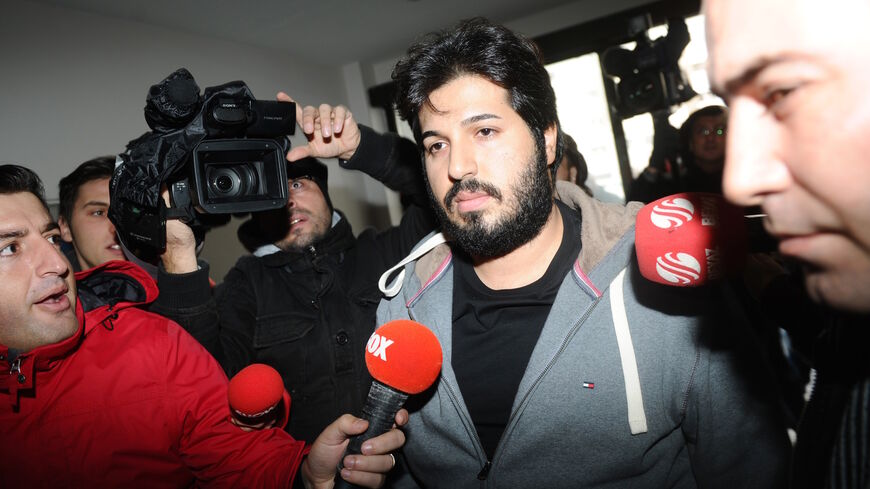 Detained Iranian-Turkish businessman Reza Zarrab (C) is surrounded by journalists as he arrives at a police center in Istanbul on Dec. 17, 2013.

An FBI agent investigating a massive Turkish-Iranian sanctions-busting scheme confirmed that the Turkish government had pressured Washington for the release of key defendants in the illicit trade and that legal proceedings against co-conspirators were far from over. The remarks, the first of their kind by an American official at a public event, spell further trouble for Turkey’s creaky finances and fraught ties with the United States.

FBI special agent Jennifer McReynolds told a Washington audience on Aug. 28, “High-level foreign officials like Turkey’s ministers of justice and foreign affairs and Turkey’s President [Recep Tayyip] Erdogan exerted diplomatic pressure. They lobbied the Department of Justice, the State Department and even the White House to release [Reza] Zarrab and [Mehmet Hakan Atilla] without a trial.”

McReynolds then confirmed Ankara’s darkest fear: “The implications of this investigation are far from over. Many other co-conspirators are indicted who have not yet been brought to justice.”

Just who might they be, and how far up in the echelons of Turkish power? McReynolds declined to comment on this, but in brief remarks to Al-Monitor said that further prosecution of officials involved in the scheme “could” follow. She did not elaborate.

Zarrab is the Iranian-Turkish gold trader who helped mastermind the scheme. He was arrested in March 2016 in Miami as he got off a flight from Istanbul and later became a witness for the prosecution. Atilla, a senior executive of Turkish state lender Halkbank, was arrested in New York a year later and sentenced to 32 months for his role in unblocking some $20 billion that were sitting in Halkbank as a result of US sanctions. McReynolds said Atilla and Halkbank “not only knew of Zarrab’s scheme, but helped to design it.”

Zarrab has boasted of his services to Turkey, famously claiming in a TV interview that he had helped plug Turkey's yawning current account deficit to the tune of 15% through his "exports."

Zarrab and later Atilla have been at the center of Turkey’s thinly veiled “hostage diplomacy” that allegedly envisages repatriating the pair, and more critically getting further investigations and indictments shelved. US citizens in Turkish custody would be sent back in exchange. North Carolina pastor Andrew Brunson is among the most prominent, with President Donald Trump weighing very publicly in his favor and threatening “large sanctions” against Turkey if he is not immediately released.

Washington has already frozen the assets of Turkey’s justice and interior ministers over Brunson's continued detention. Will other ministers be targeted in retaliation for Brunson or in connection with Halkbank malfeasance, or both?

These are all key questions. Yet the Turkish media largely gave McReynolds' speech a pass. Even opposition outlets largely ignored its substance and focused on the organizers of the event, the Foundation for the Defense of Democracies (FDD), instead.

McReynolds and a team of FBI agents and Justice department officials at the Southern District Court of New York, which prosecuted Atilla, were given the FDD’s Alberto Nisman Award for Courage at the think tank’s annual security summit. Nikki Haley, the US ambassador to the United Nations and Brian Hook, the State Department’s newly anointed representative for Iran, also took the podium.

Turkey’s pro-government A Haber news channel called the award given by the “pro-Israeli” and “anti-Turkish” FDD “scandalous.” The outlet also argued that McReynolds’ praise for Huseyin Korkmaz, the Turkish police chief who led the quashed 2013 corruption probe into Zarrab and members of Erdogan’s inner circle proved “once again” the “influence of FETO.” The initials stand for the so-called Fethullah Terror Organization,” named after Pennsylvania-based Sunni preacher Fethullah Gulen, who is accused of masterminding the abortive July 2016 putsch against the Turkish leader.

Turkish Economy Minister Berat Albayrak insisted today that if the US Treasury were to fine Halkbank over the Iran sanctions scam, as is widely anticipated, it would be a “political” decision and a result of “manipulations” by “different groups.”

Albayrak, who is married to Erdogan’s eldest daughter Esra, said Halkbank had not violated any sanctions and had cooperated fully with the Treasury’s Office of Foreign Assets Control. He went on, “To even articulate Halkbank’s name in this connection is illegal. We do not expect a fine in connection with Halkbank,” he said.

Turkey’s ambassador to Washington, Serdar Kilic, waded into the debate via Twitter. He did not name McReynolds or Gulen but there was no mistaking who he was referring to in a trio of blistering tweets: “Her biased statement at the event is an explicit testimony to the policised [sic] nature of that case and real motivations behind it. She knows better than anyone else who fabricated those so called evidences/wiretaps and what their ill intentions were.”

The envoy was echoing claims that the Zarrab trial was based on fabricated evidence provided by Gulen’s disciples in the police and the judiciary who have since been purged and jailed by the thousands or fled abroad, some to the United States. Gulen loyalists were widely believed to have doctored much of the evidence used against hundreds of Turkish generals and their subordinates, who stood trial for plotting to overthrow Erdogan in the now defunct Ergenekon and Balyoz cases. They took place between 2008 and 2010, when Gulen and Erdogan were still informally allied against the Turkish military.

A veteran of the policy community who was present at the FDD event averred that he had “wondered about the propriety of and precedent for an FBI agent’s publicly asserting things that to my knowledge went beyond the indictment and waxing outspoken about a case that is, after all, still under appeal.” The fact that the speech was given at FDD, however, “is completely beside the point,” he told Al-Monitor on condition that he not be identified.

The FDD is no stranger to controversy, with its unabashed support for Israel and unremitting hostility to the Iran nuclear deal.

McReynolds acknowledged that the Justice Department had “combed through” all the leaked documents in the Turkish National Police report “outlining evidence of high-level bribes to facilitate illicit Iranian finance with Halkbank’s involvement” that “went all the way to the then prime minister’s office. She said it “matched perfectly” with the FBI’s own findings.

Jonathan Schanzer, vice president of research at FDD who served as an expert witness at the Zarrab trial, said McReynolds’ speech indicated that the court “is still looking at information gleaned from this investigation.” He told Al-Monitor, “This should not come as a surprise, given the staggering amount of documents and data they were able to collect – some of which I have seen. I should further note that Reza Zarrab is still in their custody and has not yet been sentenced, which means he is still providing information as a witness. This is rather bad news for the regimes in Tehran and Ankara, if you ask me.”

Hook and Haley’s tough messaging at the FDD forum about punishing companies and others that continue to do business with Iran once a second round of sanctions targeting the country’s vital oil and energy sectors kicks in in November will have been certainly noted in Ankara.

Sinan Ciddi, the executive director of the Institute of Turkish Studies at Georgetown University, told Al-Monitor, “The event was a clear signal that further punitive measures against Turkey are on the way in the event that Erdogan’s government does not comply with the new wave of Iran sanctions.” Ciddi added, “The whole tone of the summit suggested FDD’s enthusiasm to encourage the Trump administration to continue pressuring and if necessary punish Ankara for continued intransigence in a wide variety of policy areas.”

Correction: Aug. 29, 2018. An earlier version of this article incorrectly attributed a question posed to McReynolds as her own words.