US President Donald Trump's tweeted promise to double tariffs on steel and aluminum has pushed Turkey's currency into yet another tumble. 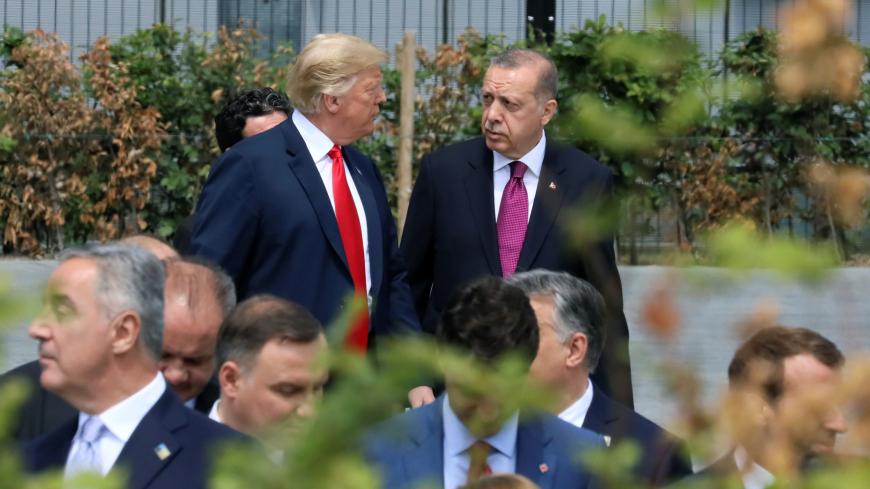 Ankara’s rocky relations with Washington took a further hit as President Donald Trump lobbed fresh salvos via Twitter against Turkey, plunging the sagging Turkish lira to new lows against the dollar. The Turkish currency shed about 17% of its value in a single day.

Trump struck a vengeful note, announcing, “I have just authorized a doubling of Tariffs on Steel and Aluminum with respect to Turkey as their currency, the Turkish Lira, slides rapidly downward against our very strong our very strong Dollar!” He added, “Our relations with Turkey are not good at this time!”

The ripple effects of Turkey’s spiraling currency crisis was felt globally as the Dow Jones Industrial Average and the S&P 500 fell 0.8% and 0.5%, respectively, following Trump’s tweet. In Europe, where exposure to Turkey is far higher, Germany’s DAX fell by 1.7% and France’s CAC by 1.2%.

Turkey’s ever-combative President Recep Tayyip Erdogan vowed to not bow to economic pressure. Speaking in the northeastern province of Gumushane, Erdogan said, “Apparently, those who believe they can force us to capitulate don’t know [our] people at all.” Erdogan has appealed to the people to convert their dollars to liras, saying Turkey is in the midst of an "economic war” with the West.

Tensions between the two NATO allies have been escalating for some time. But the immediate trigger is North Carolina pastor Andrew Brunson, who has been detained in Turkey’s Aegean province of Izmir since October 2016 on thinly supported espionage and terror charges. Negotiations for his release broke down when Turkey refused to free Brunson after his third courtroom hearing July 18. Trump, who had secured the release of a Turkish woman activist being held by Israel and just days earlier he had been exchanging fist bumps with Erdogan at a NATO summit in Brussels, took it as a personal affront.

On Aug. 1, the US Treasury announced it was freezing the assets of Turkey's justice and interior ministers over Brunson's continued detention. Congress is pushing for a slew of separate sanctions, including halting delivery of F-35 fighter jets and blocking funding to Turkey from the World Bank and the International Monetary Fund.

The latest escalation came as Turkey’s Economy Minister Berat Albayrak, who is Erdogan’s son-in-law and a trusted lieutenant, unveiled what was touted as a new economic plan, pledging Central Bank independence, tighter budget discipline and sustainable and healthy growth.

Albayrak’s feigned confidence during the near hourlong presentation was belied by his unremittingly perspiring brow, and economists came away unimpressed. “Making a speech like Albayrak’s in the midst of a currency free fall without a single concrete measure shows utter lack of comprehension about what’s happening and what’s required,” tweeted Harvard economist Dani Rodrik.

The trouble is that for all of Albayrak’s talk of Central Bank independence, Erdogan is fiercely opposed to any interest rate hikes, which are widely seen as necessary to stem the bleeding. And under Turkey’s new executive presidential system, Erdogan pretty much calls all the shots. In any case, economists warn that with the row with the United States injected into the mix, it will take far more than an increase in interest rates to reverse the downward trajectory of Turkey’s once robust economy.

An obvious and immediate step would be to allow Brunson to leave the country. But this seems less likely as Erdogan and his mouthpieces in the media cast the United States’ moves as some kind of epic battle to wreck Turkey, and Trump just gave them fresh ammunition. The conventional wisdom is that US pressure will only serve to rally Turks across the ideological spectrum around Erdogan, at least for now.