A deputy governor of Turkey's Central Bank quit suddenly today as the lira took yet another tumble. 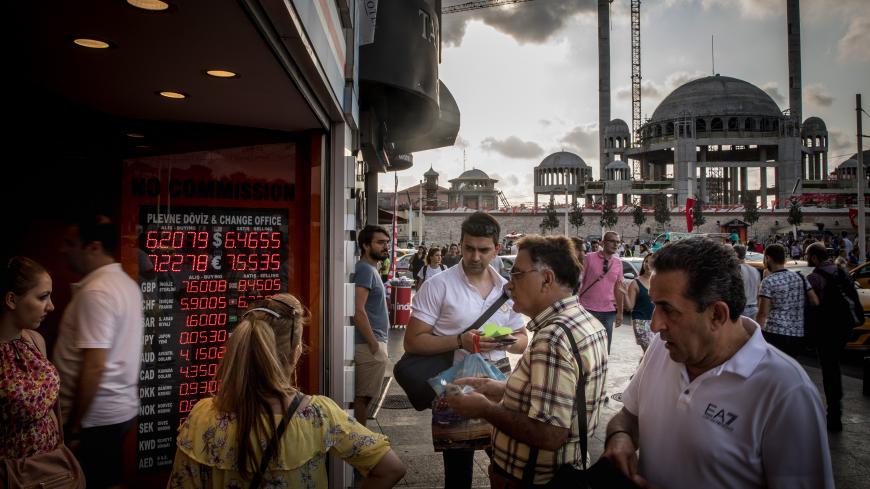 People wait to change money at a currency exchange office in front of construction on the Taksim Square Mosque in Istanbul, Turkey, Aug. 29, 2018. - Chris McGrath/Getty Images

One of four deputy governors of Turkey’s Central Bank relinquished his seat as the country’s battered currency took a further nosedive today after the Argentine peso fell to a record low on Aug. 29. Erkan Kilimci’s resignation comes a fortnight ahead of a critical meeting of the bank’s Monetary Policy Committee, where interest rates are decided. The bank is facing unremitting calls for a radical hike to bolster the plunging lira, which shed around 4% of its value against the dollar in trading today.

The lira has lost roughly 40% of its value against the greenback since the start of the year, adding pressure on banks and companies with high foreign currency liabilities. The International Monetary Fund’s latest staff report on Turkey, for this year and the next, projected the country’s overall external financing need to be in excess of $225 billion. The lower the lira drops, the harder it becomes to roll over foreign currency-denominated debt as it comes due.

The immediate reason for Kilimci’s decision remains unknown. Reuters reported he would be joining Turkey’s state-owned development bank. Turkish President Recep Tayyip Erdogan, who is authorized to name his successor, continues to insist the country’s current woes stem from “economic war” being waged by foreign powers. “They want to put pressure on us by using the economy,” he said at an awards ceremony on Aug. 29. He was referring to sanctions imposed by the United States over the continued detention of North Carolina pastor Andrew Brunson, who in Washington’s eyes is a political hostage. They include the doubling of tariffs on Turkish aluminum and steel.

President Donald Trump has warned further sanctions will ensue should Brunson not be freed. A body blow could likely come in the form of a multi-billion-dollar fine on Turkish state lender Halkbank over its central role in a massive Iran sanctions-busting scheme. The continued vilification of Brunson by the pro-Turkish media, rehashing outlandish claims based on secret witnesses’ testimony, doesn’t augur well. His trial on espionage and terror charges is set to resume in October.

Tensions between the NATO allies have accelerated the fall in the lira, but did not cause it.

Turkey’s strongman has tightened control over the bank as he has over almost every aspect of national policy since assuming full executive powers in the wake of the fraud-tainted June 24 elections. He is fiercely opposed to raising interest rates, believing, contrary to popular convention, that doing so would fuel inflation. His son-in-law, Economy Minister Berat Albayrak, has been forced to toe his line, insisting that he sees no risk for Turkey’s economy. It has shaken global investor confidence in a country that until recently was touted as a star among emerging markets.

Timothy Ash, a senior sovereign strategist in emerging markets at Bluebay Asset Management, took to Twitter to air his frustration: “[Turkish lira] weakening again, up close to 6.70. Where is the [Central Bank of the Republic of Turkey] and what is the strategy? Anyone home?” he asked.