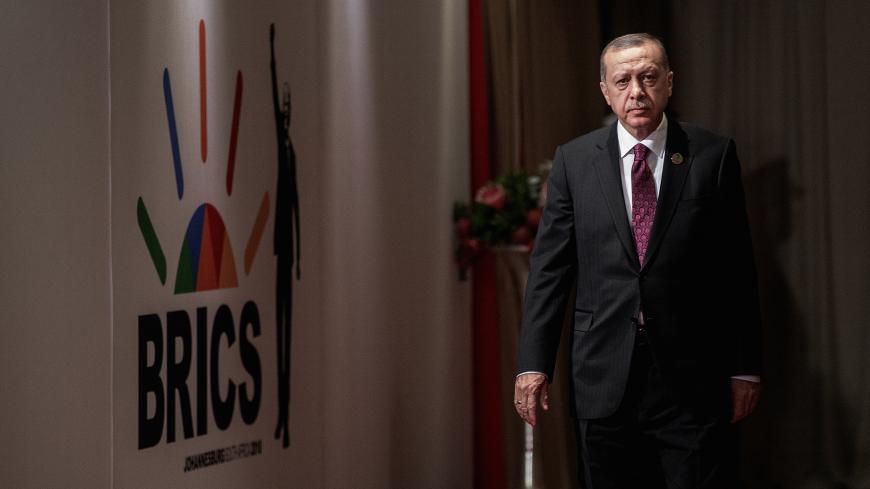 For millions of Turks who voted against him in the June 24 presidential elections it's too late, but President Recep Tayyip Erdogan’s popularity has taken a substantial hit, according to a recent survey. Metropoll, an Ankara-based polling outfit, reported that Erdogan’s job approval rating had dipped to 44.5% in August 2018 from 53.1% a month prior.

The data published on the polling site’s Twitter account offered no further information because the company’s monthly report is circulated privately to paying clients. Moreover, in the absence of similar surveys, it's impossible to compare its results. However, it’s not far-fetched to assume that after 16 years of uninterrupted power Erdogan’s appeal may be waning as his strongest suit, a thriving economy, is coming unstuck.

The Turkish lira has lost around 40% of its value against the dollar since the start of the year and Turkey’s banks are under growing pressure. They need to refinance $77 billion of foreign currency-denominated wholesale bonds and syndicated loans, according to Moody’s Investors Service, within the next year. The financial ratings agency downgraded 20 Turkish financial institutions on Aug. 28.

Inflation as measured by the Consumer Price Index rose 2.05 points last month to 18% and the government was forced to raise natural gas and electricity prices by 14% and 9%, respectively. That is the highest level of inflation recorded since 2003.

Municipal elections that are due to be held in March 2019 will be a critical test. Erdogan told reporters en route home from Kyrgyzstan he might consider fielding joint candidates with the far-right Nationalist Movement Party (MHP) in a repeat of his alliance with the group in the June 24 presidential elections. The MHP did not field its own candidate, backing Erdogan instead. Erdogan clearly feels vulnerable as he continues to rely on the nationalists’ support.

“If [both parties] agree. Why not?” Erdogan said.

Erdogan’s Justice and Development Party (AKP) shot to power in November 2002 in the midst of another economic meltdown.

The AKP’s predecessors were forced to seek a bailout from the International Monetary Fund. The AKP’s strict adherence to the terms of the IMF program in the able hands of then-economy tsar Ali Babacan underpinned the resurgence of Turkey’s economy, making it one of the fastest growing economies worldwide. But as Daron Acemoglu, the globally acclaimed economist at the Massachusetts Institute of Technology, observed in a recent essay for Bloomberg, economic reforms were twinned with greater political inclusiveness as it sought full membership in the European Union, creating an inviting climate for foreign investors.

Erdogan has since done a big U-turn, hollowing out the country’s democratic institutions, locking up his critics and concentrating power in his own hands. He also dictates Central Bank policy, resisting interest rate hikes that are widely seen as crucial if no longer a panacea to solving Turkey’s economic woes.

He continues to portray Turkey's current problems as part of an "economic war" being waged by jealous foreign powers bent on weakening his country, a line that is being aggressively pushed by the Turkish media, which is 90% owned by Erdogan's pliant business cronies. But Metropoll's findings suggest that the narrative no longer washes with the public as hardship sets in.

If Turkey were to seek help again, the IMF may not be as receptive.

The US Congress is demanding that Turkey free US citizens, most notably North Carolina pastor Andrew Brunson, and shelve the purchase of Russian-made S-400 missiles and has urged the administration to block all funding to Turkey from global financial institutions such as the IMF and the World Bank unless it complies.

Last month, the United States doubled tariffs on Turkish steel and aluminum, prompting a further tumble in the lira.

Brunson’s next courtroom hearing on dubious espionage and terror charges is expected to be held in the port city of Izmir on Oct. 12. Erdogan signaled the pastor was unlikely to be freed before then, despite President Donald Trump’s threats of further sanctions.

“The legal process is continuing in Izmir. It is impossible for us to comply with illegal demands. Turkey is a state of law. Sorry,” Erdogan said. He also told reporters on board the presidential jet that he would not seek a meeting with Trump when the two leaders attend the opening of the 73rd session of the UN General Assembly in New York on Sept. 18. “They didn’t request [a meeting]. Nor will I.”