The Turkish government’s rush to hold elections in June is driven by economic woes that even its attempts at "doping-induced" growth have failed to overcome. 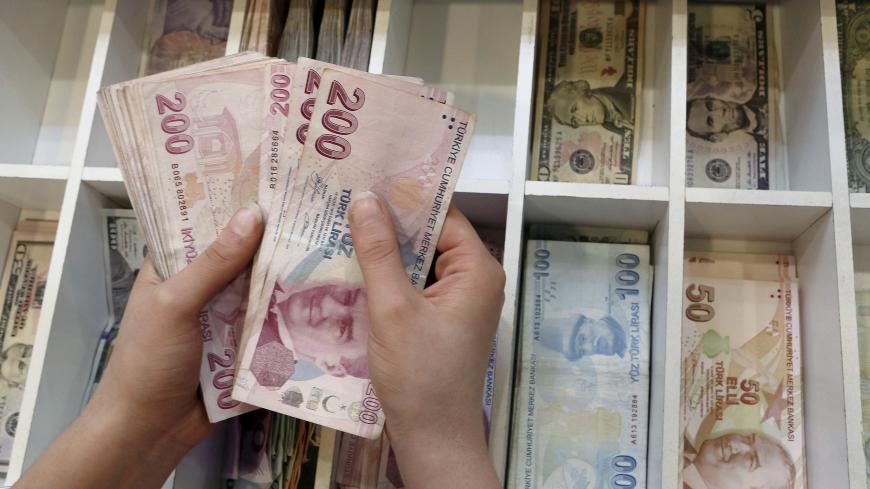 For governments, times of high economic growth — when the positive expectations of consumers and producers rise — are typically the best time to call elections. During the Justice and Development Party's (AKP) 15 years in power, it has benefited from such favorable timing, with economic vitality pleasing voters and swaying the polls in its favor. This time, however, Turkey’s economic growth — a staggering 7.4% in 2017 — is blowing back into Ankara’s face.

In an abrupt decision last month, the government brought presidential and parliamentary polls forward, to June 24 from Nov. 3, 2019. The move appeared driven by a sense of urgency to weather the polls as soon as possible before the country’s economic downturn erupts into the full-blown crisis that many experts are predicting.

Pundits had been abuzz with talk of early elections for months. Mahfi Egilmez, a well-respected economic commentator and a former head of the Treasury, wrote as early as January that the AKP would likely bring the polls forward, pointing to the party’s successful election record in times of high growth as well as the January expectation surveys, which reflected an optimistic sentiment among consumers and producers alike.

In the ensuing months, however, the expectation surveys deteriorated. They indicated that consumers and economic actors were growing pessimistic about any improvement in the inflation and unemployment rates, expected no increase in their incomes, would refrain from investment and spending in the near future, and saw little prospect for a decrease in the current account deficit.

In March, the international credit rating agency Moody’s further cut Turkey’s sovereign credit rating, which was already in “junk” territory, citing the country’s growing fragilities and being unimpressed by its growth rate. Meanwhile, the global financial climate had begun to blow headwinds for emerging economies like Turkey’s, which, coupled with existing woes, sent the Turkish lira into a dramatic slump. Ironically, in the hours when the Turkish Statistical Institute (TUIK) released the 7.4% growth rate on March 31, the price of the dollar reached the psychological threshold of 4 liras.

In the first four months of the year, the lira lost about 7.5% of its value against the greenback. For private companies, currently running a net foreign exchange deficit of $211 billion, each increase in hard currency prices has meant swelling debt in terms of Turkish liras. Meanwhile, the share of savings kept in hard currency accounts has reached almost 45%, as wary Turks seek refuge in foreign exchange to protect their savings against the slump of the lira.

This brings us back to how last year’s economic growth was achieved. The expansion relied on extreme government incentives — or doping, so to speak — and as so often happens with athletes who rely on doping, it has led to anomalies that are difficult to conceal.

Consumer inflation remains stubbornly above 10%, while the 12-month increase in producer prices is even higher, at about 15%, reflecting that imported inputs have become more expensive for manufacturers due to the plunge of the lira. Deputy Prime Minister Mehmet Simsek, who oversees the economy, conceded last week that the lira’s free fall had taken the government aback. “We did not expect such a fast depreciation in the lira,” Simsek said in a television interview. “This has delayed inflation’s decrease to single digits.”

Pay raises, however, have failed to match the ossifying inflation. According to TUIK data, payments to labor stood at 34.5% of gross domestic product last year, down from 36.5% in 2016, indicating that the economy grew to the detriment of the country’s 19 million workers.

A government-guaranteed loan expansion was another growth stimulant, but the banking sector is now worried about bad loans and is reluctant in issuing fresh ones.

The rising foreign exchange prices required moves to make the lira more attractive, which called for raising yields on the national currency. Yet, the Central Bank’s attempts to hike interest rates have faced fierce objections from President Recep Tayyip Erdogan, who has long pressed for lowering borrowing costs.

The inadequate increase in interest rates against inflation fueled the foreign exchange rush among local and foreign money holders, pushing prices even higher and further disrupting economic balances. On April 25, the Central Bank finally moved to raise its key interest rate, but even the 75-basis point hike was by then inefficient in curbing the foreign exchange.

On top of this, growth and rising interest rates in the United States have led global funds to start pulling out of emerging countries such as Turkey, which has the added disadvantage of a growing risk premium due to its involvement in the Syrian war. A repressive state of emergency in place since the failed coup attempt in July 2016 has been another major drawback and has irked the business community. The Turkish Industry and Business Association, the country's leading industrialist group, has frequently complained that the state of emergency is scaring off foreign investors, but to no avail.

Turkey's economic woes have coincided with the arrival of a new actor on the political scene, the Good Party, led by Meral Aksener, who, along with several other heavyweights, split from the Nationalist Movement Party (MHP), the AKP’s ally. The Good Party’s aim at becoming Turkey’s main center-right force and luring voters from the AKP-MHP base has appeared to further distress the government.

MHP leader Devlet Bahceli was the first to urge early elections, on April 17, noting the economic gloom. “Holding out until Nov. 3, 2019, is not easy for Turkey,” he said. “Making it [safely] to Nov. 3, 2019, is becoming more difficult with each passing minute.”

Former President Abdullah Gul — who was unsuccessfully encouraged to run as a joint opposition candidate against Erdogan in the presidential race — made a similar observation, warning of “serious” economic hardship down the road. “Turkey faces great difficulties in the current internal and external circumstances,” he said April 28. “Despite the need for peace and cohesion, a climate of polarization and anxiety prevails. We are faced with the greatest problems of survival in our history. We see that economic problems, too, have reached serious levels.”

In sum, the government's doping-induced growth has backfired, forcing the AKP's rush to elections before popular discontent becomes more damaging for the party and strengthens the opposition. In welcoming the snap polls, Simsek said that holding them as originally scheduled would have prolonged the “climate of uncertainty” that was discouraging investors.

Simsek's comment is in itself an admission of how Turkey’s high growth rate has failed to inject confidence among investors and how managing the economy has now become more difficult.