Civilians task themselves with administering IS-free areas of Raqqa

The new Raqqa Civilian Assembly is overseeing areas of the province that have been cleared of the Islamic State and helping thousands of refugees who are risking everything, traveling clandestinely on booby-trapped roads to get out of the city. 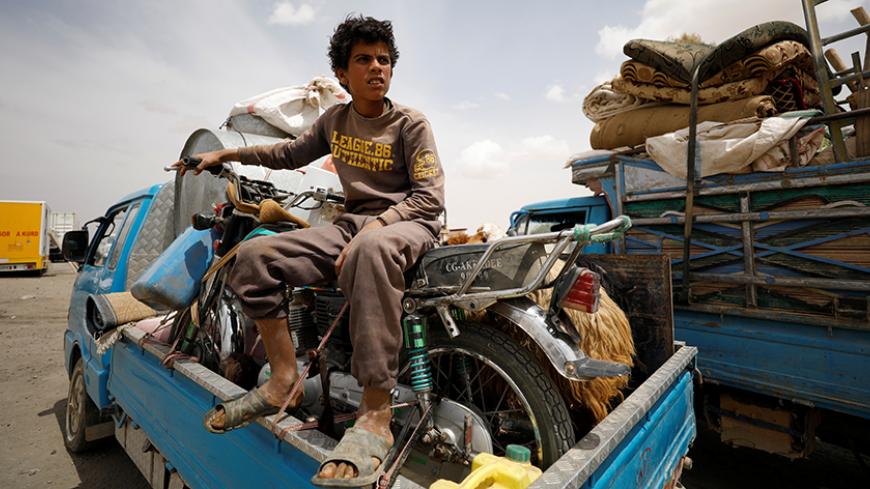 An internally displaced Syrian boy who fled Raqqa city rests on a vehicle loaded with belongings inside a camp in Ain Isa, Raqqa province, Syria, May 2, 2017. - REUTERS/Rodi Said

AIN ISA, Syria — Summer has come to Raqqa province. The extreme heat makes outdoor living difficult. Temperatures driven up by sandstorms often exceed 122 F (50 C). There is not much green space — but there are ample minefields.

I came to Ain Isa, about 35 miles north of Raqqa city, to meet with members of the newly established Raqqa Civilian Assembly, but first I stopped at tent cities there where Raqqa's displaced are housed. I spoke with families who had been caught in a violent sandstorm while fleeing Raqqa. Hussein Jassim, from the village of Kubush west of Raqqa, said, “To avoid [the Islamic State (IS)] we escaped to the desert, and slept in the open for four days. We got caught in a sandstorm. Nobody came to help us. Twenty-three people died there.”

For some time, there have been media reports that Arab tribes oppose having the Kurdish-dominated Syrian Democratic Forces (SDF), a US ally, involved in liberating Raqqa. IS is said to be telling Raqqa Arabs that the SDF will come and torture them. But the refugees were willing to take the risk: What could be worse than their lives under IS?

With a child in his arms, Juma al-Wiladah said: “Look. This is my 5-year-old son. He apparently said some things when playing with his friends. Guess what? [IS] raided my house to capture and take my son away to execute him. They claimed the boy had said nasty things about God and religion. Many people intervened to save my boy.”

His wife, Fatima, spoke up: “We suffered a lot. They trampled on our dignity and security in our own house. Somebody should save us. We have no strength to put up with this any longer.”

Apart from fighters and refugees, I saw only a few people outside at Ain Isa. In the Raqqa Civilian Assembly headquarters, some members had gathered for a meeting. Raqqa-born Leyla Mustafa, an assembly co-chair, said she is a civil engineer by profession. The other co-chair is Sheikh Mahmoud Shawakh al-Bursan, leader of the Al-Weldeh Arab Tribes Union. Al-Weldeh is the biggest Raqqa tribe.

When asked about the refugees' situation, Mustafa replied: “We have massive numbers of refugees. So far, 115,000 refugees have reached here. Tens of thousands more are looking for ways to flee Raqqa town. We house the refugees in the tent cities. … Help from humanitarian organizations is about zero. The coalition countries have not provided any humanitarian assistance. The other day 23 of our people died at Jub al-Shair because we couldn’t reach them in the sandstorm.”

I asked Mustafa about the assembly's objectives. “After large segments of Raqqa province were liberated from [IS], we felt the need for such a body. Today, apart from the Raqqa town center, most of the province is liberated from [IS]. It badly needs a civilian administration," she said.

"After liberating the town, the SDF will hand over administration to our assembly. That is why they participated in our constituent assembly. … They will be responsible only for the defense of the province. Law and order in the town will be handled by the newly established Raqqa police.”

The Raqqa Civilian Assembly was set up April 18 with 110 members present. Omer al-Khamri from al-Weldeh tribe, who has been acting as a deputy speaker for the assembly, said there are more than 200 members. Not all of them can acknowledge their membership because their relatives still can’t get out of Raqqa. "If we had announced their names, [IS] would have rounded up [their families] and hurt them,” he said.

Another deputy speaker is lawyer Ibrahim Hasan from the Turkmen village of Hamame. He said the assembly includes representatives of various religions and all ethnic groups, "whether Arab, Turkmen, Kurd or Armenian … though Arabs are the majority."

All assembly members I talked with emphasized the role of Arab tribes. “Arab tribes constitute the base of the social structure of Raqqa. It is important to maintain a balance among them and ensure that they are represented,” Hasan explained.

Mustafa noted, however, that though there are many positive elements of tribal structure, it can also hold acute dangers. “[IS] hatched schemes to set the tribes against each other, and wrecked the social and cultural balances we always had," she said. "Today, we are afraid blood feuds and revenge-taking will erupt among tribes.” One key objective of the assembly is to ensure social peace, which members hope to achieve in part by empowering women, she added.

I asked assembly members about their contacts with Kurds in northern Syria. Hasan said they have had no relations with them so far. “The only support we got was from the Syrian Democratic Assembly," the SDF's political arm.

As I spoke with them, we could hear TV reports about Turkey’s air attack against the Kurdish People's Protection Units (YPG) media center at Karachok. Hasan was upset.

“Turkey is violating international legal norms daily against our people," he said, but those efforts ultimately will be unsuccessful. "Turkey has lost because it did not favor a solution in Syria. We will stand by our people and oppose Turkey’s designs for occupation.”

Khamri added, “Where was Turkey before the SDF? For six years we waited for Turkey’s support. But we found out that Turkey supports our enemy [IS].”

In addition to minefields and booby-traps, IS is leaving in its wake people who are also petrified by Turkey’s threats. They worry deeply about what might happen if the US agrees to Turkish President Recep Tayyip Erdogan's constant demands to be part of the city's liberation instead of Kurdish groups.

But what about the Syrian opposition groups that Turkey supports, such as the Free Syrian Army? What does the assembly expect from those groups? "Nothing," Hasan said. "Sadly, the opposition supported by Turkey has never represented the Syrian people. Their function is to serve Turkey’s interests and political projects. That opposition has no place in Raqqa.”