Why liberating Mosul won't lead to the end of IS

Due to the wide remote area between Iraq and Syria, retaking Mosul will not mean an end to the Islamic State. 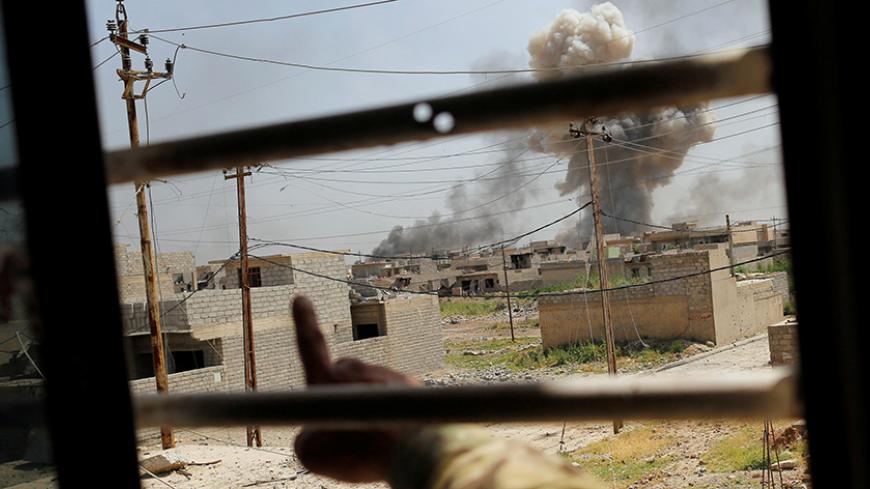 A member of the Iraqi rapid response forces points at an airstrike during clashes with Islamic State fighters at a front line in northwest Mosul, Iraq, May 9, 2017. - REUTERS/Danish Siddiqui

BAGHDAD — Although Islamic State (IS) fighters in western Mosul are cornered within a steadily shrinking area that is expected to be retaken soon, analysts warn that the fight against the group in the country is far from over.

Hisham al-Hashimi, one of Iraq’s most widely respected security and terrorism experts, told Al-Monitor that the transnational terrorist group “has not yet fought at its maximum strength” and has left only a “hindering” force in Mosul, which was previously known as the group’s capital in Iraq.

He claims that many IS members are unknown by name to Iraqi intelligence and that documents found in recaptured areas of Mosul show that IS’ “hidden” men are referred to in their own records using only numbers and no names, making it likely that many have simply melted into the population and will not be flagged during screening procedures.

Moreover, in commenting on an Iraqi military announcement in mid-April that IS currently held less than 7% of the country — down from an estimated 40% in 2014 — Hashimi scoffed, noting that “this is only counting the populated areas. They actually still hold 18% of it.”

“This is important,” he stressed, since “they still hold Hawija, as well as Tal Afar, Al-Baaj,” and the cities of Rawa, Anah and Qaim in the western Anbar province.

“We don’t have enough forces to fight in Hawija. Until we recapture all of Mosul and Tal Afar, we can’t go back to Hawija,” he said, adding that “Hawija is a difficult area due to its agricultural characteristics and the fact that it is a stronghold for militants. Fighters who have fled from the Diyala, Salahuddin and Kirkuk provinces are there.”

He estimates that approximately 5,000 IS fighters remain in Hawija. Most of the fighters who carried out a massive attack on Kirkuk late last year that killed over a hundred people use Hawija as a base, along with many who still continue to carry out attacks across Salahuddin province.

“Iraq has no safe border with Saudi Arabia,” Hashimi noted. The Anbar region that straddles the border with Syria has seen a recent uptick in attacks, and some reports say that IS fighters there are using tunnels to conduct attacks on Iraqi noncombat troops stationed there, who are “untrained and unequipped to engage in such fighting.”

In an interview with Al-Monitor at the Hammam al-Alil base, Lt. Gen. Raed Shaker Jawdat, the head of the federal police, called Mosul “the devil’s nest.” He said it was necessary to get rid of and that although taking it would not mean an end to IS, it would be an extremely significant victory.

He told Al-Monitor that IS’ vast administrative and financial system that underpinned its activities has transformed the group “simply into a gang.”

Hashimi, however, cautioned that the daily reports sent out by the Iraqi War Media Cell to journalists are “pure propaganda,” joking that “if you calculate the number of dead IS in the statements, it will total almost the entire population of China.”

The statements proudly proclaim the killing of different key figures on a daily basis, calling them by their nom de guerre, but “I know for a fact that many of them are still alive” and others “weren’t important in the first place.”

One such man is Abu Ayoub al-Attar, who Iraqi military forces said had been acting as mufti of the city and who they claim was killed in late April. A commander told Al-Monitor on a front line in the city a few days later that he was actually still alive, and Hashimi said he was never very important within IS.

A man “known as the Judge of Blood, Nizam ad-Din Abdullah al-Rifai,” who Iraqi forces have also proclaimed dead, “from al-Zingili in West Mosul, is instead an important figure within the organization” but “I am in contact with some of his relatives and they have told me he is still alive.”

Rifai “is considered one of the founders of the Salafist movement in Iraq and has been imprisoned for his activities four times, in 1978, 1986, 1994 and 1999,” Hashimi told Al-Monitor. “He is a major theorist and most people who joined IS in Ninevah were influenced by him. IS asked him to leave Mosul but he refused.”

IS “is not running away,” he said. “They never run away.” Much of the three brigades of foreign fighters in Mosul have remained in the city, he said.

IS still has three “armies” between Iraq and Syria, he added, each of which he estimates has around 12,000 fighters — “Jaish al-Khilafat, Jaish al-Usra and Jaish al-Dabiq” — making a total of 36,000 armed men.

Hashimi said that many of the key figures and fighters are thought to have left for Al-Baaj, between when the operation to take the eastern part of Mosul began on Oct. 17 last year and the beginning of this year.

The transnational terrorist organization took Mosul in June 2014 but had existed in various forms in Iraq for many years before.

Since the operation began in October last year to retake the key city, Hashimi estimates that roughly 3,500 IS members have been killed and about 50,000 have died since August 2014.

And although IS “might lose militarily, their propaganda wing will continue” and “the hidden men of IS are the most important. We don’t know who they are. There is no information about them in the databases. Their neighbors don’t even know who they are,” Hashimi said.