With IS on the way out, Iraqi power struggles pose major threat 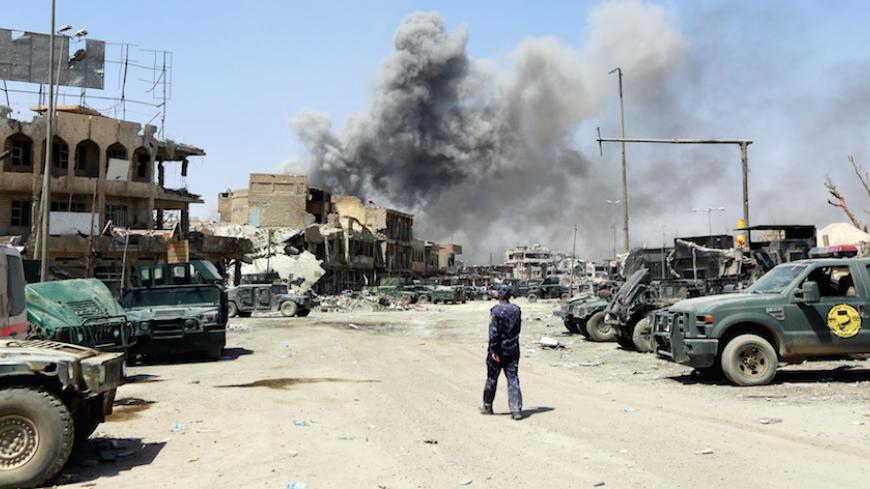 Smoke rises from an airstrike during fighting with Islamic State militants in the Old City of Mosul, Iraq July 6, 2017. - REUTERS/Ahmed Saad

Lt. Gen. Stephen Townsend, the US commanding general of the combined task force of Operation Inherent Resolve, confirmed that the war against the Islamic State (IS) in Iraq is not over yet, despite the great victory in Mosul and the end of IS’ occupation of the strategic city. He said there are still major challenges ahead for the Iraqi armed forces to establish security in Iraq.

During a July 11 press conference in Baghdad, he told journalists via satellite, “There are still pockets of resistance in Mosul, holdouts, and hidden IEDs [improvised explosive devices] that will take weeks to clear, as well as remaining [IS] enclaves in Hawija and western Anbar.” Iraqi Interior Minister Qasim al-Araji confirmed this, saying July 16 that "the battle is far from over.”

One of the most important challenges facing the Iraqi forces is the loss of a large number of troops in the battles in Mosul. According to the US Department of Defense, the Iraqi Counter Terrorism Service (CTS) suffered 40% battle losses in Mosul. The CTS has played the most important role in the liberation of Mosul, and prior to that in many areas in Anbar and Salahuddin provinces; it enjoys a good reputation among Iraqis, due to its performance, professionalism and abstention from any sectarian conduct.

Townsend said the Iraqi forces need a period of rest before proceeding with the liberation of the remaining IS-occupied territories.

These losses underscore the importance of supporting the international coalition against IS. The coalition countries, especially the United States, provide hundreds of millions of dollars in support for the buildup and sustainability of Iraqi forces and offer support in many other fields.

CTS head Talib Shaghati said in a TV interview July 14, “All the coalition countries played a prominent role, especially our close American friends, who had a clear role in providing support in the fields of intelligence, information and air reconnaissance, and also in training intelligence personnel to collect and extract the obtained information and make conclusions from it.”

Townsend said the Iraqi government asked US troops to stay in Iraq until after the liberation of the country from IS. In addition, the United States plans to build new military installations in Iraq; however, these plans face fierce objections from Shiite factions, presaging a complicated security situation in the next stage.

“The United States is aiming to occupy Iraq in an indirect hegemonic way and is also planning to establish an organization similar to the [Syrian Democratic Forces],” Akram al-Kaabi, secretary-general of Harakat Hezbollah al-Nujaba, said in a statement published July 15.

Harakat Hezbollah al-Nujaba is an armed Shiite faction close to Iran with a military presence in both Iraq and Syria. Other Shiite factions had previously threatened to attack US forces should they decide to stay in Iraq.

In this unstable environment, the Iraqi forces need to adapt to the new IS forces’ situation in Iraq. Most military and intelligence reports say that IS will resort to guerrilla attacks on military and government positions and terrorist attacks on civilian targets. According to international reports, Iraqi forces have improved in combating such attacks. The Institute for the Study of War published a report July 10 that said increased security measures had inhibited a cohesive IS offensive in Iraq and Syria during Ramadan.

But this did not prevent IS from causing painful losses among Iraqi civilians. The bombing of an ice cream shop in Baghdad in May that left dozens of dead and wounded is the best proof of that.

The difficulty of fighting these movements lies in that IS members hide among civilians, making it difficult to single them out. Warding off such attacks requires trained and well-equipped security forces as well as an integrated infrastructure that enables the state to monitor the movements of its citizens in various fields such as communications, car purchases, house rentals and purchases, transfers of funds and other movements, and such an infrastructure is still missing in Iraq. In addition, IS takes advantage of the rampant financial corruption in Iraq to launch attacks.

But the main challenge facing Iraqi security forces appears to be political differences and the struggle for power and influence. In 2016, clashes broke out between forces from the Popular Mobilization Units and the Kurdish peshmerga forces in Tuz Khormato, south of the city of Kirkuk. Also, clashes between the Ninevah Guards, a Sunni force, and the Shiite faction of Kataib Sayyid al-Shuhada took place in Mosul on July 20. There are fears that these clashes might expand into open warfare amid deep differences over the disputed areas extending from Jalula near the Iranian border, through Kirkuk province and into Yazidi areas near the Syrian border. Terrorist groups have been able to exploit differences over these areas for years to operate more freely. These very differences were behind the postponement of the liberation of Hawija in western Kirkuk province and Tal Afar in western Ninevah province.

Despite the remarkable progress made in the performance of the Iraqi forces, which led to the liberation of most of the IS-occupied areas, great challenges will seemingly complicate the security situation in the coming stages.