How Trump's upcoming visit is connecting Israelis and Palestinians

The May 22 visit of President Donald Trump pushes Israelis and Palestinians into greater cooperation, driving Prime Minister Benjamin Netanyahu to decide on a package of economic incentives for the Palestinians. 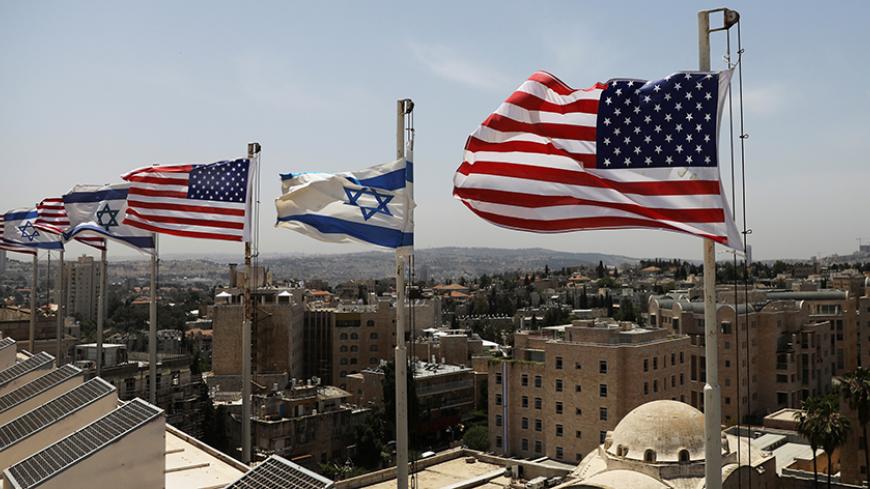 American and Israeli flags flutter in the wind atop the roof of the King David Hotel, in preparation for the upcoming visit of US President Donald Trump, Jerusalem, May 17, 2017. - REUTERS/Ronen Zvulun

The meeting between Israeli Finance Minister Moshe Kahlon and his Palestinian counterpart Shukri Bishara in Jerusalem on May 17 was friendly and warm. The two men met secretly, without announcing it in advance, and discussed a package of economic incentives for Palestinians that the Security Cabinet is slated to approve May 21, just before the arrival of US President Donald Trump to Israel on May 22.

Kahlon and Bishara's meeting was the direct continuation of talks in Brussels on May 4 between the US special envoy to the Middle East, Jason Greenblatt, Israel's Minister for Regional Cooperation Tzachi Hanegbi and Bishara. Upon returning to Israel, Hanegbi relayed messages to Kahlon about the economic crisis facing the Palestinians. This led directly to the meeting between the two finance ministers.

It was Kahlon's people who made sure that news of the secret meeting would make its way to the media upon its successful conclusion. What this means is that Kahlon, who heads a centrist party with obvious leanings to the right (Kahlon served in the past as Likud minister), believes that meeting with the Palestinian Finance Minister in a positive atmosphere and granting allowances and benefits to the Palestinian Authority would score him points among the Israeli public.

The meeting is yet another sign signaling a change in mood, which the new US president is bringing to the region.

Trump will arrive in Israel and the Palestinian Authority next week for his first visit as president. It is hard to ignore the fact that preparations for his arrival have reduced tensions between Jerusalem and Ramallah at least somewhat, after a steady increase over the years due to the Palestinian wave of terror and the policies of Israel's right-wing government. One component of this easing of tension is the fact that a visit of this scope demands logistical and security cooperation between the two parties.

While no one is fooling themselves into thinking that peace is about to break out after long years of stalemate, it looks like the parties are trying to mitigate the tense atmosphere.

It is interesting to follow the actions of the hard right, headed by the chairman of HaBayit HaYehudi Naftali Bennett, in light of these developments. So far, Bennett has contained himself. He has not protested the incentive package that will be brought before the Cabinet for approval, and which includes, among other things, the around-the-clock opening of the Allenby Crossing between Israel and Jordan and accelerating development of industrial parks adjacent to Jenin and Hebron.

In the past, the right stubbornly opposed granting any benefits to the Palestinians, claiming that doing so would be succumbing to terrorism. This stood in sharp contradiction to the argument made by senior defense officials, who claim that improving economic conditions in West Bank cities reduces violence against Israel. Trump was considered a big supporter of the Israeli right and the settlers when he was elected, which makes it difficult for them to speak out against the US president these days. In addition, Trump has reneged on his promise to move the US Embassy from Tel Aviv to Jerusalem and has surprised everyone by coming out against construction in the West Bank.

The starting point of having a new president who is not suspected of having personal prejudices regarding the Israeli-Palestinian conflict or being hostile to Israel helps create a new balance between the parties and improves the mood between them.

Netanyahu has arrived at this point with enough experience to know how to act in these new circumstances, with an American president who believes that he can restart negotiations between Israel and the Palestinians and maybe even reach a peace agreement. The last thing the prime minister plans to do is to be a contrarian as the US president's vision takes shape. That is why he is greeting Trump with a package of incentives for the Palestinians as a gesture of goodwill. Netanyahu wants to prove that he is not the one refusing to make concessions or progress.

The last time an American president visited Israel was in March 2013. Barack Obama was then just starting his second term and had shown a genuine desire to lead Israelis and Palestinians to a peace agreement.

At the time, most Israelis felt removed and distant from Obama. Unlike his predecessors George W. Bush and Bill Clinton, Israelis regarded him as a pro-Palestinian president, even though he was a true friend of Israel, who protected their strategic interests no less than his predecessors.

Obama's speech before a young audience at the Jerusalem Convention Center succeeded in improving the mood somewhat. He struck a sentimental chord among Israelis when he concluded his speech by saying "You are not alone" in Hebrew. On the other hand, the lack of chemistry between him and Netanyahu and their poor relationship also affected the mood among the public and prevented Obama from really reaching the hearts of Israelis.

About a year later, diplomatic negotiations led on the Israeli side by then-Justice Minister Tzipi Livni came crashing down, clearing the way for a new wave of terrorism. The intifada of individuals contributed largely to intensifying the desperate feeling among Israelis that they will never be able to reach an agreement with their Palestinian neighbors. Ever since the signing of the 1993 Oslo Accord, Israelis have gone through a painful process of sobering up from any hopes they had of peace, a process expressed by a significant shift to the right. The same thing happened to the Palestinian public.

Unlike Obama, Trump has a chance of winning the hearts of Israelis and breaking the ice in the longstanding diplomatic freeze between Israel and the Palestinians. To a large extent, his character resembles the Israeli temperament: He is informal, unpredictable, very blunt and very accessible. He began his term clearly favoring Israeli and even settler interests. That is why all Israelis listen more carefully to what he has to say, including Israelis on the right.

The leadership of the far right will also think twice before attacking Trump. After rushing to coronate him as a great leader under whom they would even be able to annex settlements to the State of Israel, they will have a hard time explaining how he suddenly became the enemy of their camp. Not only will this sound unbelievable, it also implies a very troubling conclusion: If Trump has become an enemy of the settlers, there can probably be no other important international leader to ever support them again.