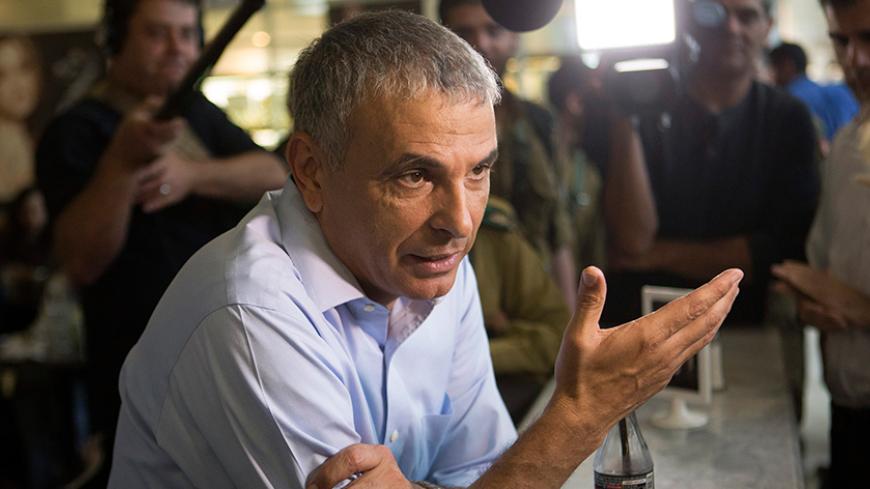 Moshe Kahlon, head of the new centrist party Kulanu, speaks to the media while in Tel Aviv, March 15, 2015. - REUTERS/Tomer Appelbaum

A reluctant, barely visible ray of light has begun to penetrate the ruins of the peace process over the past few weeks, gently illuminating the relationship between Israel and the Palestinians. Two people can be credited for that: Israel’s Finance Minister Moshe Kahlon and Palestinian Finance Minister Shukri Bishara. On Feb. 18, the two men met for the third time, and Kahlon will soon be presenting a bundle of economic measures that will benefit the Palestinian public. It is hoped that this package will generate a change of mood on the ground, tempering perhaps the cycle of difficult events that continue to unfold, including the wave of terror by individuals, which will soon mark six months since it began. So far, the casualties in this current round of violence have included 30 Israelis, a foreign resident from Eritrea and a Palestinian from Hebron, not to mention more than 200 Palestinian terrorists, most of them very young.

“I will not be the one to bring peace, and I am not dealing with the diplomatic process,” Kahlon told Al-Monitor in January. “On the other hand, I think that it is possible to advance economic issues and help change the lives of the Palestinians. This is not some lofty goal. It’s entirely possible. There can be much better, more effective economic ties between us and them, and this in turn may help break the deadlock, increase trust and change the overall mood.”

Kahlon has put quite a bit of thought into this effort and considerable means as well. On Feb. 21, Israel’s Channel 10 reported that he will soon be putting the finishing touches on a package of economic measures, which he will then present to Prime Minister Benjamin Netanyahu. Netanyahu is subsequently expected to proudly show off these measures to the Americans and Europeans. It has been a long time since the prime minister first made a commitment to US President Barack Obama and Secretary of State John Kerry that Israel would take a series of steps to improve the lives of the Palestinians, but he never kept his promise. Efforts to allow Palestinians to build in West Bank Area C (under full Israeli control) were thwarted by the right-wing base of his coalition, while other initiatives also came to naught. Given the current mood in Israel, which is confounded by this new wave of terrorism, it is now impossible to make any diplomatic gestures. There is a vacuum, and Kahlon has been sucked into it. Even if there can be no diplomatic gestures, there can at least be economic ones.

A second meeting between the two men took place in January. Bishara and senior members of his staff were received at the Finance Ministry by Kahlon, who was also surrounded by senior staff members. The Palestinians discussed the economic difficulties they face, including problems of liquidity and credit, which threaten the Palestinian Authority’s (PA) economic stability. In an interview with Israeli daily Haaretz in March 2015, Bishara was extremely critical of Israeli policies, which delay the transfer of taxes it collects for the Palestinians and impose as many difficulties as possible on the Palestinian economy. These policies, it should be noted, are all in response to Palestinian President Mahmoud Abbas’ diplomatic offensive against Israel in the United Nations and other international organizations.

It now seems as if Israel’s tone is changing, and that Kahlon is at the forefront of this new mood. Israel is less bothered by diplomatic attacks in the international arena than it is by physical attacks on Israelis, committed by dozens of young Palestinians, usually armed with knives. Jerusalem now recognizes the urgent need to shift its priorities and bring some hope to young Palestinians, many of whom set off on heroic suicide attacks against Israeli border patrol officers out of sheer frustration, hatred and the sense that they have reached a dead end.

During last month’s meeting, Kahlon told Bishara that he would look into all the figures and requests and get back to him with more comprehensive responses. As aforementioned, on Feb. 18 the reciprocal meeting took place. Kahlon responded positively to several requests from his Palestinian counterpart and offered an additional series of trust-building measures intended to instill hope. He promised to allow Palestinian real estate developers and contractors to work in infrastructure and even construction in Israel, hoping that this would help lower the astronomical cost of housing, while increasing the Palestinians’ ability to engage in construction projects. This, in turn, would be a boost to Palestinian employment and the PA’s economy in general.

Another step involves the integration of Palestinians in jobs and internships at Israeli high-tech companies. According to Kahlon, it is time for the Palestinians to start to benefit from the roaring Israeli high-tech engine, too. A third step is to allow Palestinian physicians to do their internships and ultimately work in Israeli hospitals. The goal is to raise the level of medical care in the PA, which now needs a steady flow of assistance from Israel. Even now, Israeli hospitals provide Palestinians with most of their more complicated medical treatments. Kahlon contends that there is no reason why we would not allow them to develop advanced medical care.

Behind closed doors, Kahlon says that his goal is to establish economic trust between the two sides. Instead of banging their heads against the wall trying to reach breakthroughs in ''the core issues,'' it is time for the leaders to start talking about life itself, and this includes the quality of life. According to Israel’s top experts, part of the frustration felt by young Palestinians results from a lack of hope and the dim future that the PA offers its young people. “They look westward, to Israel, and see the abundance, the advanced society, high-tech industry and the quality of living. Once they realize that they will never be able to live like that, some of them undergo radicalization,” a senior Israel security official told Al-Monitor on condition of anonymity.

Kahlon is now trying to change all that. He hopes to take it to the next level by setting up joint economic enterprises in industrial zones that he plans to establish in West Bank Area B (civil Palestinian control, joint Israeli-Palestinian security control) and Area C, reducing custom payments, decreasing the time needed by Israel to transfer tax moneys to the Palestinian authorities and increasing the number of permits to work in Israel. The latter is subject to real drama, with the Israel Defense Forces applying endless pressure on politicians to increase the number of Palestinians with permits to work in Israel or the settlements. As one senior security official told Al-Monitor on condition of anonymity, “We want young Palestinians and Palestinians with families who work in Israel to be able to make a decent living and support their families with dignity. We do not want them throwing rocks on the highways, demonstrating on Fridays or taking a knife and charging a border patrol policeman on duty at the Damascus Gate [in Jerusalem]. Statistics prove that ever since the current wave of violence erupted, there has been just one single case of terrorism committed by a Palestinian with a permit to work in Israel. People who work in Israel are content and do not commit attacks. That’s a fact.”