Why Israelis don't care about electricity agreement with PA

Israeli Finance Minister Moshe Kahlon was disappointed when Israelis showed little interest in and even expressed disapproval for the groundbreaking electricity agreement signed between Israel and the Palestinian Authority. 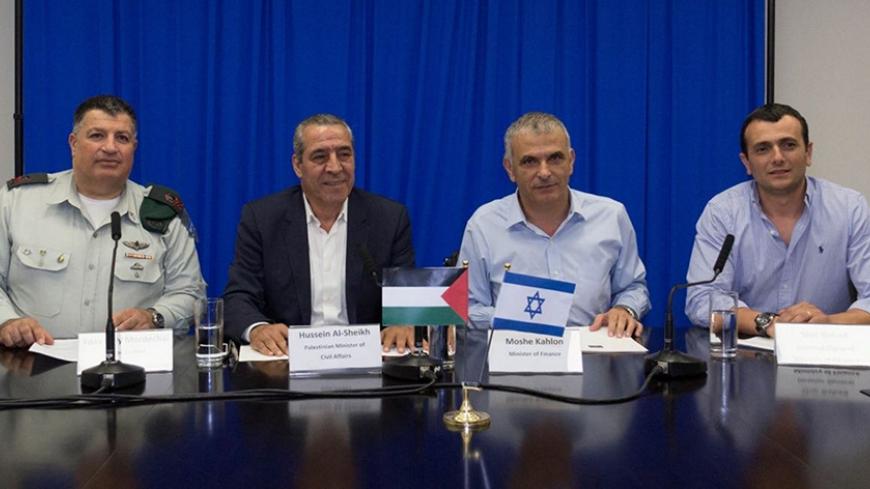 Israeli Finance Minister Moshe Kahlon sat down on Sept. 13 with Hussein al-Sheikh, the minister of civil affairs for the Palestinian Authority (PA), at a table festooned with Israeli and Palestinian flags. It was quite obvious that Kahlon was excited.

Kahlon and Sheikh were meeting to sign an agreement to settle the enormous debt that the PA owes the Israeli Electric Company, estimated at 1.78 billion shekels ($480 million). According to the terms of the agreement, the PA will pay the electric company about a third of its debt — 570 million shekels ($150 million) — in cash, while the rest will be paid out over 48 installments. About 500 million shekels ($132 million) of the debt will be forgiven.

The agreement was worked out behind the scenes over many long months, with the help of the Norwegian government. It allowed the PA to take control of its own electricity market and rid itself of an enormous debt, which weighed down on the management and supply of electricity to cities across the West Bank. The deal should also end the power cuts initiated by Israel in April.

According to the agreement, responsibility for managing the Palestinian electricity market will be transferred to the PA. To this end, a new body will be formed with the exclusive right to buy electricity from the Israel Electric Company and will bear full responsibility for paying the electric bills of the residents of the PA. Furthermore, it was decided to create two teams of professionals, one Israeli and the other Palestinian, to put together a commercial agreement between the two parties and to develop new energy projects.

It is hard to remember a time in recent history when senior ministers from Israel and the PA met for a ceremony that conveyed a message of optimism and normalcy after a lengthy diplomatic freeze and brutal waves of violence.

No less unusual than the event itself were the finance minister’s remarks. He used the occasion to remind Israelis why they must never cease efforts to reach a solution to the conflict between the two peoples. In Kahlon’s own words, “The agreement ensures the steady supply of electricity to and the economic development of the Authority. A stable economy in the Palestinian Authority is an Israeli interest economically, diplomatically and security-wise.”

Kahlon ended his remarks somewhat diplomatically, saying, “Anyone who thinks that the two parties can reach a breakthrough without direct negotiations and without any preconditions is acting against the best interests of his people. If we fail to take a stand to resolve the historic problem between us and the Palestinians, we will leave our children with a problem that will be much harder to resolve.”

No one should make light of what the Kulanu chairman said. His comments are exceptional in a government landscape in which ministers compete to pummel the PA and its leader the hardest and then run off to brag about it on social media.

Ironically, in Netanyahu’s right-wing government, Kahlon, a former member of the Likud who opposed the 2005 disengagement from the Gaza Strip, finds himself the most moderate force in diplomatic affairs.

In this particular instance, it wasn’t just talk. Kahlon spearheaded an important agreement that not only resolves the issue of Palestinian debt, it's also a trust-building measure between Israel and the PA. Furthermore, inherent in the agreement is recognition by senior Israeli leadership that it is in its best interest to transfer government responsibility to the PA. In this time of deep mistrust between Israel and the PA, with the possibility of yet another wave of violence hanging in the balance, such a move could potentially lower the level of desperation among Palestinians and stop the next breakout of bloodshed.

Nevertheless, despite the agreement’s significance and despite the fact that for the first time in years, a senior Israeli official cooperated with a senior Palestinian official to resolve a crisis that has gone on for a decade, the Israeli media as well as the public showed almost no interest.

News of the agreement was first reported Sept. 12 by Channel 2 News, but other media outlets scarcely mentioned it. This important event effectively slipped under the radar and disappeared entirely from the agenda in just a day. Kahlon was mistaken in believing that news of the agreement and the signing ceremony would make waves in the media and among the public. Much to his chagrin, he discovered that an event he considered so important evoked little if any interest.

The finance minister received no acclaim for the agreement — quite the opposite. Judging by his Facebook page, it may even have been damaging to his public image. Kahlon was accused of taking care of the Palestinians instead of dealing with the Israeli housing crisis and took acute criticism for his “obsequious” concessions toward the Palestinians from some of the commenters.

Israeli disinterest in and disengagement from Kahlon’s agreement shows how the public has been brainwashed with regard to the Palestinians and the renewal of diplomatic negotiations.

Over the past few years, even moderate Israelis have started to give up on the possibility of finding a solution to the conflict. This growing despair began with the failure of the Camp David Summit, when then-Prime Minister Ehud Barak declared that there was no partner for peace. It continued with the Israeli pubic believing former Prime Minister Ehud Olmert when he claimed that Palestinian President Mahmoud Abbas declined a generous offer on his part for a permanent status agreement. The public ignored the fact that Olmert was at the time already a lame duck that Abbas could not count on. During the last seven years, under the rule of Prime Minister Benjamin Netanyahu, any Israeli belief that the Palestinians desire peace has increasingly eroded. In that time, Abbas became a punching bag for the Israeli leadership, particularly for Yisrael Beitenu Chair and Defense Minister Avigdor Liberman, who insulted the Palestinian leader on a regular basis and declared that he was no longer relevant. The process reached its climax with the formation of Netanyahu’s entirely right-wing government. The most moderate factor in that government is Kahlon, who until now rarely spoke out about diplomatic issues, preferring instead to focus on the economy.

When the latest uprising began to rear its head, government discourse toward the Palestinians became even more radicalized, populist and aggressive. At the same time, the willingness of the Israeli public to listen to the cries of distress from the other side or to consider whether a diplomatic solution might be in Israel’s interest dissipated. It was replaced by the populist slogan, “There is no one to talk to.”

Even leaders of those parties that advocated a two-state solution for years, like Labor and especially Yesh Atid head Yair Lapid, have since folded up their banners. They bring up the issue as little as possible, preferring to fight against the boycott movement instead. As such, it is hardly surprising that Kahlon’s historic move was ignored at best.