The "economic peace" proposed by Israel to the Palestinians resembles more economic colonialism than economic ties between equal partners. 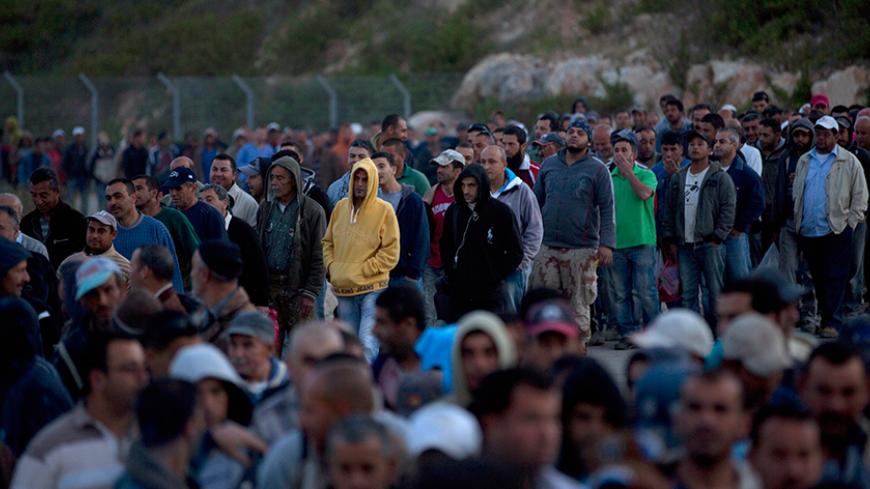 Palestinian workers wait to cross into Israel at Hashmonaim checkpoint near the West Bank village of Nilin, west of Ramallah, March 14, 2013. - REUTERS/Darren Whiteside

Gen. Gadi Eizenkot, the Israeli military chief of staff, gave the Israeli Cabinet a periodic security briefing Feb. 21. According to press reports, Eizenkot expressed concern over the deteriorating political situation within the Palestinian Authority (PA) and the continuation, for six months by now, of almost daily terror attacks by individual Palestinians. He recommended to the Cabinet that the economic situation in the West Bank be ameliorated, primarily by allowing a greater number of Palestinians to work in Israel.

Simultaneously, Israeli Finance Minister Moshe Kahlon met in recent weeks with Palestinian Minister of Finance and Planning Shukri Bishara and agreed to transfer half a billion Israeli shekels ($127 million) of withheld customs tax to the PA in order to alleviate their enormous budget deficit. Israeli Prime Minister Benjamin Netanyahu, while reluctant to be personally identified with these policies, supports such moves, as he has already promised the US administration to take economic measures in that direction.

The Palestinians are in dire need of assistance. Their economy suffers as a result of the current security situation, with measures taken by the Israeli army curtailing freedom of movement. There is also the issue of fatigue and reluctance by the international donor community to keep transferring money to the PA. The unemployment rate in the West Bank and the Gaza Strip has reached 27.5% and is over 35% for Palestinian youths, according to Trading Economics, which bases its figures on data from January by the Palestinian Central Bureau of Statistics. At the same time, the price of basic food products keeps rising and increased by 2.7% in 2015. The trade deficit is dramatic: $335 million in 2015, which is exacerbated by claims of economic mismanagement and government corruption. Nevertheless, despite the dire need for Israeli economic assistance, the Palestinian leadership in Ramallah rejects out of hand any Israeli talk of economic peace or any economic assistance replacing an immediate two-state solution.

A senior Fatah executive member with close ties to President Mahmoud Abbas spoke to Al-Monitor on condition of anonymity about the Israeli economic measures. “Israel is not the solution to our economic hardship, but the cause of this hardship to begin with. Also, there is no real Israeli economic assistance — they are simply giving back our money from customs taxation according to existing economic agreements. And greater freedom of movement is a far cry from what our bilateral agreements stipulate. The PA cannot develop a single economic project in areas of its jurisdiction without Israeli military and bureaucratic consent. Not to speak of the prevention of Palestinian economic development in 60% of the West Bank [Area C, under Israeli control]. The security checks for imports and exports make trade impossible and Israel’s continuous hold on infrastructure materials and plans [water, electricity, roads] make daily life impossible. There is only one solution to prevent the gradual collapse of the Palestinian economy: Palestinian statehood on the 1967 lines and an end to the occupation. That is also the solution to Israel’s security predicament. We will not be bought by self-serving Israeli economic measures,” he said with visible anger.

The Israeli government’s view of economic peace derives from its rejection of a two-state solution. A senior Foreign Ministry official dealing with the Palestinian issue told Al-Monitor on condition of anonymity that a two-state solution is currently out of the question, blaming Abbas for incitement of violence. The senior official said that given this situation, Israel’s policy toward the PA must be based on aiding the West Bank economy in order to prevent the dismantling of the PA. He claimed that the Foreign Ministry and the Israel Defense Forces see eye to eye on this and expressed confidence that the transfer of funds by the minister of finance and the increase of Palestinian work permits to Israel would stabilize the internal Palestinian crisis and also the security situation.

The Israeli government suffers from a serious misperception in regard to its economic relationship with the PA. Israel aspires to increase and abuse the Palestinian dependence on its economic clout in the West Bank. What the Palestinians want is political and economic independence. They are ready, unlike most other Arab countries, for economic cooperation with Israel.

Returning funds to the Palestinians — funds that belong to them in the first place according to the Paris agreement of 1994 between Israel and the PLO — and granting work permits for cheap Palestinian labor signify basing such economic relations on Israeli dominance, instead of equality. A more constructive relationship will require Israeli investment in the Palestinian high-tech sector, joint economic zones, tourism cooperation and a more equal share of water resources for the Palestinians. Above all, this necessitates a different Israeli worldview leading to the sharing of the land between two states. What is proposed today leads up to a form of economic colonialism.