Israel is preparing to implement a series of economic concessions to the Palestinians, which some see as a step to circumvent a political solution to the Israeli-Palestinian conflict. 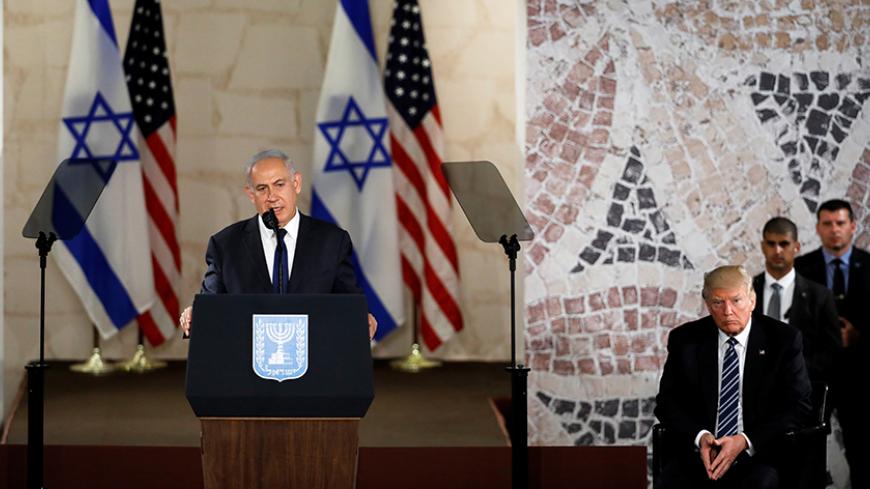 Political rupture has been plaguing Palestinian-Israeli relations ever since political negotiations between the two were disrupted in June 2014, while security coordination still stands.

On May 17, Israel’s Channel 2 reported a secret meeting held that day in Jerusalem between Israeli Finance Minister Moshe Kahlon and his Palestinian counterpart Shukri Bishara. During the meeting, an agreement was reached whereby Israel would provide economic concessions to the Palestinians. It was also reported that both Israeli Prime Minister Benjamin Netanyahu and Mahmoud Abbas, the head of the Palestinian Authority (PA) and president, knew about this meeting.

Confirming the meeting, a senior official at the Palestinian Ministry of Finance told Al-Monitor on condition of anonymity, “Israel and the PA agreed to hold regular meetings to settle many financial issues all the while guaranteeing the Palestinian interests. These issues include accounting and missing clearing bills that were not received by the Palestinian side, in addition to the amounts of money Israel is yet to transfer to the Palestinian treasury,” of which he did not specify their value.

On May 21, Haaretz reported that US Middle East envoy Jason Greenblatt succeeded May 2 in bringing together Israeli Minister of Regional Cooperation Tzachi Hanegbi with senior Palestinian officials, on the sidelines of meetings between donor countries in Brussels.

On May 22, al-Hurra news site cited an anonymous Israeli official as saying that the Israeli government had ratified on May 21 Palestinian economic and living concessions, such as increasing working hours on crossings in the West Bank for Palestinian workers to have more time to enter Israel as well as expanding the Ephraim crossing near Tulkarm.

The concessions also included making the Allenby crossing on the Jordanian border provide 24/7 service, allowing Palestinians to pass between the West Bank and Jordan at any given time; expanding the industrial zone in Tarqumia, south of Hebron; granting permits to thousands of Palestinian housing units in Area C; and connecting the city of Jenin to the Israeli train network.

In this context, Nasr Abdel Karim, a professor of economics at Birzeit University in the West Bank, told Al-Monitor, “Holding such economic meetings between Israeli and Palestinian officials to discuss concessions for Palestinians is an extension of the economic peace project advocated by Israel for years at the expense of the political path. [Israel] is looking to reach a solution through the economic portal, since offering economic projects is much easier than making political concessions to the Palestinians.”

Abdel Karim added, “At the same time, the feeling of achieving economic gains with Israel may create a sense of security and political stability for Palestinians, which means a good number of Palestinians will be interested in preserving these gains and will no longer care for the political issue; they would only be motivated to preserve their interests and maintain the status quo when it comes to politics. According to the Palestinian Central Bureau of Statistics, if economic and living hardships were to persist amid high unemployment rates amounting to 26% during 2016, the crisis in the Palestinian society would worsen and thus its security implications would lead to an open field confrontation with Israel.”

It seems Israel may have used these economic meetings with the Palestinians to send a message to the international community in general and the US administration in particular. And this message aims to show coexistence between Israelis and Palestinians despite political tensions, which could give Israel more time to prepare for any possible US pressure to reach a political agreement with the PA. This is particularly true since it coincides with US President Donald Trump's visit to Israel and the Palestinian territories on May 22-23.

Abdullah Abdullah, a member of Fatah’s Revolutionary Council and the head of the political committee at the Palestinian Legislative Council, told Al-Monitor, “The Palestinian goal is to end the Israeli occupation of the Palestinian territories — not improve its conditions. The concessions Israel is providing are not enough because this is a mere plan to trick the Americans and influence their approach to settle the Palestinian-Israeli conflict. The economic measures taken by Israel in the West Bank do not contribute to resolving the conflict, as the only solution would be to end the occupation and establish the Palestinian state.”

He said, “We refuse to have such concessions as temporary steps to reach a comprehensive political solution because we are against partial and intermittent solutions, and we demand a final solution to the conflict.”

The Palestinians may be well aware that Israel recycles the same policy all over again whenever it senses security threats or political pressures. It is reusing these economic concessions for several purposes, mainly to prolong the conflict with the Palestinians.

Khalil Shaheen, a political analyst and director of the research unit at the Palestinian Center for Policy Research and Strategic Studies (Masarat), told Al-Monitor, “The seriousness of the Israeli concessions lies in the fact that Israel may draw the Palestinians into an economic solution and distract them with managing the conflict instead of finding a final solution for it. Israel would launch a political path in the coming months only as a formality and a cover for the economic solution.”

He noted, “But over the past 10 years, Palestinian economic, political and security elite figures have been working on maintaining the situation as it is in the West Bank in order to serve their interests. So it bodes well for them to benefit from the Israeli concessions, even if it were at the expense of the political issue.”

Some of the economic concessions Israel has announced are old projects, namely expanding industrial zones, allowing workers to enter Israel and giving Palestinian construction permits in Area C. Yet interestingly enough, Israel has put them forward as Trump prepared to visit the region, in an attempt to ensure economic peace with the Palestinians.

Meanwhile, the PA may see anything it gains from Israel as a victory, regardless of whether or not it facilitates political progress.