The Palestinian Authority worries that the new US administration will withhold aid, in part to pressure Palestinians to return to the negotiating table with the Israelis. 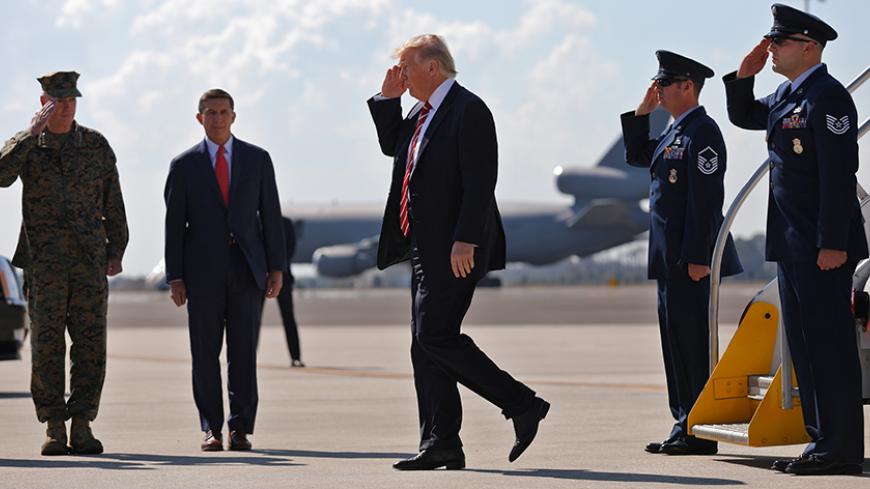 US President Donald Trump salutes as he arrives at MacDill Air Force Base in Tampa, Florida, Feb. 6, 2017. - REUTERS/Carlos Barria

The Palestinian Authority (PA) isn't concealing its concern over the future of its ties with the new US administration, as President Donald Trump has made inconsistent statements about his position on Israel. The PA has set up a committee to confront a worst-case scenario that might unfold under Trump.

Even before Trump was sworn in Jan. 20, he talked about relocating the US Embassy from Tel Aviv to Jerusalem and at one point spoke out against UN Security Council Resolution 2334, which condemns Israeli settlements. He has since modified the settlement position more than once, at first warning Israel to stop announcing new settlements, and then softening that message somewhat to say he doesn't believe existing settlements will impede the peace process.

White House spokesman Sean Spicer said Jan. 25 that Trump would be reconsidering President Barack Obama’s decision to release $221 million to the PA in aid, as Trump wants to make sure US funds spent abroad serve US interests.

Palestinian Minister of Finance Shukri Beshara said Jan. 26 that the US Congress has proposed several laws criminalizing the PA's financial support for families of prisoners and families of Palestinians who have been killed in fighting. If adopted, such laws would limit the PA’s ability to manage Palestinian accounts in the United States and abroad.

“The new US administration is more biased [in favor of] Israel and less neutral when it comes to the Palestinian-Israeli conflict," Ghassan al-Khatib, the former Palestinian labor minister and former director of the Government Media Office, told Al-Monitor.

"Under Trump, the road ahead will be full of challenges, as US aid to the PA will be possibly reduced," though not enough to collapse the PA "because the world dreads such a scenario," Khatib said. "Even Washington is keen on maintaining the status quo in the Palestinian territories. Also, Trump might influence the positions of international parties to halt the financial support given to the PA due to the weak Palestinian impact on the international political scene.”

Palestinian Prime Minister Rami Hamdallah said in late August that the United States has provided aid to the PA since the group was established in 1994 — one year, he claimed, as much as $1 billion — but in 2015, the United States only paid $250 million, and the payment was dedicated to projects and institutions and not paid in cash to the public treasury.

According to statements issued by the Palestinian Ministry of Finance on Sept. 28, 2015, between 2007 and 2015 the average annual US support to the Palestinian budget amounted to $300 million. However, in 2012, Palestinian President Mahmoud Abbas visited the UN and secured nonmember-observer state status in the UN, seeking to strengthen its odds of being recognized as a state. Some in Congress opposed the move and the funding declined.

Nasr Abdel Karim, an economics professor at An-Najah University in Nablus, told Al-Monitor, “Trump’s administration is expected to reduce the aid provided to the PA, and it will scrutinize the way the US aid to Palestinians is being spent. The administration does not want to completely stop the aid and just wants to place further pressure on the PA to resume direct negotiations with Israel."

Karim added, "US support in 2016 did not exceed $200 million, most of which was channeled to nongovernmental organizations, infrastructure projects and good-governance projects — and not to the PA treasury. Palestinians fear that Washington will influence other countries such as Britain, Australia, the Netherlands, Singapore and Japan to adopt its new policy.”

Saeb Erekat, the secretary of the PLO Executive Committee, said Jan. 31 that following the December adoption of UN Security Council Resolution 2334, which affirms that Israeli settlements are illegal, the US Congress threatened Jan. 3 to cut off aid to the PA should it pursue its case against Israel in international forums.

A Palestinian minister told Al-Monitor on condition of anonymity that “despite its concerns over Trump’s adoption of political and economic decisions against it, the PA can cope with these policies through austerity measures and expenditure channeling."

He added, "However, the PA is more reliant on clearing and tax money from Israel, and these funds amount to $180 million a month and account for 75% of the PA budget. The PA has concerns that Washington would pressure Israel into using these funds to return to the peace process under US and Israeli conditions, without stopping the settlements."

The declining US support to the PA under Obama between 2008 and 2016, and its possible dramatic reduction under Trump, could be blamed on:

Palestinians expect history to repeat itself and they believe Trump will want to oust Abbas, just as former US President George W. Bush did with Yasser Arafat, when Bush called in 2002 for a change in the Palestinian leadership.

"The US' partial — not complete — cutting off of aid to the PA is highly probable, as this would serve as a tool of pressure [on the PA] to return to the negotiations with Israel that have been stalled since April 2014," Khalil Shaheen, the director of the Research Department at the Palestinian Center for Policy Research and Strategic Studies - Masarat, told Al-Monitor.

He added, “Although the PA’s primary financial support comes from the European Union, not the United States, the problem facing the PA is that Britain’s positions are converging with Washington's and that France is headed to presidential elections and may get closer to Israel.”

Most Palestinians believe that the four coming years under Trump will be challenging for the PA, with aid reduction being the most difficult challenge, in the absence of an Arab financial safety net to offset the declining US aid.