US fears aid cuts to PA will undermine security of Israel

There are reports that Israel and the United States are working to resume aid to Palestinian security agencies as they fear the funding cuts might affect security coordination. 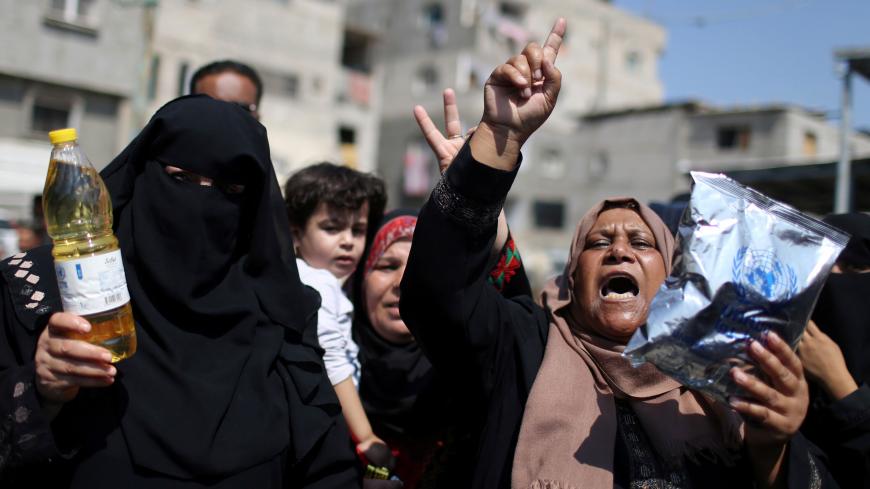 Palestinian women hold aid during a protest against a US decision to cut funding to the United Nations Relief and Works Agency, outside an aid distribution center, in Khan Yunis, southern Gaza Strip, Sept. 11, 2018. - REUTERS/Ibraheem Abu Mustafa

RAMALLAH, West Bank — President Mahmoud Abbas instructed the Palestinian government to send a message in January to the US government in which it requested ending the US aid program for the Palestinian security agencies, Secretary-General of the PLO Saeb Erekat said at a press conference Jan. 31 in Ramallah, in the presence of Al-Monitor.

Erekat said the decision is to avert any potential lawsuits filed against the Palestinian government at US courts in accordance with a new anti-terrorism bill — the Anti-Terrorism Clarification Act of 2018 — passed by the US Congress. The law, which entered into force Feb. 1, states that any foreign entity benefiting from US funding is subject to American anti-terrorism laws.

This latest step was preceded by the US administration’s decision to cut $25 million worth of aid to Palestinian hospitals in East Jerusalem in September 2018. The United States has also ended its contributions to the budget of the United Nations Relief and Works Agency for Palestine Refugees in the Near East, amounting to about $370 million, in addition to its funding of health care, education and infrastructure projects.

Al-Monitor tried to contact several Palestinian security sources, but they refused to comment, saying they are not authorized to speak to the media.

Mohammad al-Masri, former intelligence director and director of the Palestinian Center for Policy Research and Strategic Studies, told Al-Monitor that Palestinian security agencies receive an annual funding of $60 million from the United States in the form of training for security agencies, weaponry and vehicle supply.

The Palestinian Authority (PA) has security ties with the United States that include aid, training and supply of necessary equipment as per a road map announced by the US Department of State in April 2003.

In a Sept. 19 report, the US Department of State even hailed the efforts of the Palestinian security forces that prevented operations targeting Israel. “The US assisted the PA’s counterterrorism efforts by providing training, equipment, and infrastructure support to the PASF [Palestinian Authority Security Forces],” the report reads.

It continued, “US training and support assisted in the PA’s continued development of professional, self-sufficient, and capable security forces. The US also assisted the PA with criminal justice investigations and prosecutions of terrorist financing and terrorist-related activity.”

Masri said, “As per the road map, the US sought to develop the capabilities of the security institution in order to foster security agencies that would serve the next Palestinian state. [The US] continued to provide support over the past years, but it has stopped now and started blackmailing.”

In January 2018, US President Donald Trump had said US aid to the Palestinians would be resumed only if they return to the negotiating table with Israel.

The new law has sparked Israeli and US concerns as to how much it would affect the level of security coordination with Israel, as well as the Palestinian security agencies’ efficiency in stopping attacks against Israel. Nonetheless, the PA is keen to prove that they have a robust security apparatus that will not be affected by the aid cut.

Security coordination between the PA and Israel is one of the items included in the 1993 Oslo Accord, according to which the two sides exchange security information, including on operations that might be launched against Israel.

The Hebrew-language newspaper Yedioth Ahronoth reported Dec. 30 that Lt. Gen. Eric P. Wendt, US security coordinator for Israel and the PA, was instructed by the Trump administration to speak to members of US Congress in the hope of amending this law.

The newspaper also reported that Israel is going to great lengths asking the United States to keep the aid to support the Palestinian security in fear of undermining security coordination with the PA.

“The Americans have made their decision, but we will continue to combat terrorism in the region,” Erekat stressed. “The cessation of aid will not affect the Palestinian security agencies in 2019.”

Meanwhile, Masri played down the impact of the aid cut on the performance of Palestinian security agencies, “[Palestinian security] agencies are fully aware of their role in maintaining stability and domestic security in Palestine, as well as regional and global stability, for they are a part of the anti-terrorism system,” in reference to the security services work and commitment with Israel, and with agreements signed to prohibit any attacks against Israel.

The PA does not want US aid to the security services to be the exception in the new US bill. “This is unacceptable,” Ahmad Majdalani, member of the PLO’s Executive Committee, told Al-Monitor. “The US administration has ceased all forms of aid for the Palestinians and cut all political relations when it shut down the PLO office in Washington on the grounds of it being labeled as terrorist. They will not recognize our right of self-determination."

He added, “The Palestinians will not accept to be a security agent for the United States. We do not accept security assistance that is isolated from a political relation that comes before all, as well as respect for our rights and the Palestinian leadership. Unless the matter of political relations is rectified, we can’t accept US aid just to preserve Israel’s security or for the sake of security coordination.”

The PA is expected to tap into its state budget to cover the gap caused by the US aid cuts, while also seeking more financial support from Arab and European countries.

Ghassan Khatib, a former planning minister who is a lecturer of Cultural Studies and Contemporary Arab Studies at Birzeit University, told Al-Monitor it is unlikely that “aid for Palestinian security would be excluded from the bill.”

He said, “From a legal standpoint it is difficult to insert an amendment into a law that has already come into effect. It is also difficult for the PA to solely accept security aid away from other sectors.”

The Palestinian government allocated 21% of the $5.8 billion state budget for 2018 to security, according to the Coalition for Accountability and Integrity.

However, Khatib added, “Ceasing the entirety of US aid means reduced foreign aid for the PA, which will hurt services, education, health care and security — thereby lowering economic metrics in Palestine, which will eventually harm the PA on a political level.” In that case, the PA will fail in keeping up with its commitments toward the Palestinian people, which would hurt its position and credibility.

In light of the PA’s rejection of US assistance, the United States Agency for International Development ceased all forms of aid for the Palestinians in the West Bank and Gaza Strip on Feb. 1, which previously went into various sectors such as health care, education and infrastructure as well as support for civil society.

Ending the US financial aid had its ramifications on hundreds of workers at Palestinian civil society groups. Mohammad al-Sheibi found himself out of work in November 2018, after serving for 10 years as director of research and media at the Ramallah-based Arab World for Research and Development (AWRAD), as US support for three projects undertaken by the center has been ceased.

Sheibi told Al-Monitor that AWRAD ran a major project on the state of democracy, human rights and the Palestinian cause since 2008, through which the center was conducting a political survey every three months. With the project halted, the center faced a crippling financial crisis, besides having to stop two other projects, one of which was ongoing for five years in collaboration with the Palestinian Ministry of Local Government on the performance of local governance committees in the Palestinian territories. As a result, two colleagues of Sheibi have been discharged, too.

Despite speculations that ending US support for Palestinian security agencies will not affect their performance, the 2019 general budget, which is currently being worked on by the PA, will have to endure more pressures now that all US aid has been cut amid grim forecasts for the Palestinian economy in the new year.