Congress in no hurry to act as Palestinians reject security aid

A new law has unintentionally ended security assistance for the Palestinian Authority, and Congress is in no rush to fix it. 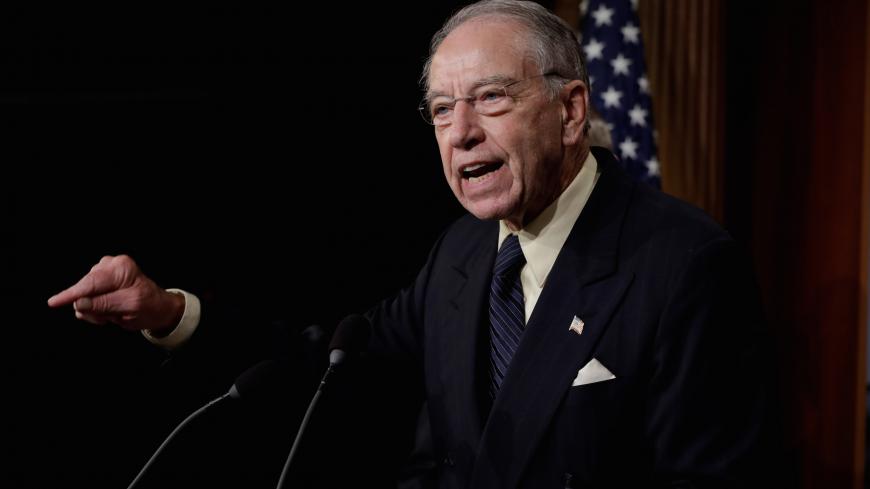 Palestinian officials today announced that they will no longer accept US security assistance amid fears that doing so could open them up to terrorism-related lawsuits.

The concerns stem from the consequences of a law Congress passed last year. The White House has asked Congress to amend the law before it goes into effect at the end of the month, but lawmakers appear in no hurry to do so.

Both the House and the Senate unanimously voted for the law, introduced by Senate Judiciary Committee Chairman Chuck Grassley, R-Iowa, and President Donald Trump signed it into law in October. But the Associated Press reported in November that the White House had asked Congress to amend the law post facto so that the PA could continue receiving security aid.

Despite the White House request, amending the law does not seem to be a priority for the new Congress, which is struggling to agree on spending legislation amid the longest-running government shutdown in US history.

“I didn’t know that was a problem with the bill, so I better study the bill and see if I agree with them that it’s even a problem,” Grassley told Al-Monitor recently. “But let me make it very clear: I’m not particularly interested in giving American taxpayer money to terrorists that want to kill Israelis.”

Israeli and Palestinian leaders have historically been proponents of the security aid.

“The Israelis love it,” said Dave Harden, the managing director of the Georgetown Strategy Group and a former US Agency for International Development assistant administrator in the Barack Obama administration. “It provides training … and it professionalizes the [Palestinian] security forces. And it serves as an avenue between the Israelis and the Palestinians to work for cooperation and practical issues, so it’s very important.”

While security coordination with Israel remains unpopular with the Palestinian public, many in Washington favor it as it is used to stop groups like Hamas and Islamic Jihad from operating in the West Bank.

“The security assistance is by far the most vital and successful program that we’ve had in the West Bank in the last 10-15 years,” said Ilan Goldenberg, a senior fellow at the Center for a New American Security’s Middle East program. “You’ve had Palestinian security forces just get much more effective, and also cooperating much more with Israel opposing Hamas and other extremist groups in the West Bank through a joint cooperation and training program. … This would put all of that at risk.”

Plaintiffs seeking to sue the PLO in US courts hired the law firm Arnold & Porter Kaye Scholer in March 2017. The firm has never reported spending more than $5,000 in any single quarter lobbying Congress on the Anti-Terrorism Clarification Act.

The law is designed to bolster the plaintiffs in the case of Sokolow v. PLO, a terrorism-related lawsuit dating back to 2004. A federal appeals court overrode a lower court ruling awarding the plaintiffs $656 million in damages in 2016, on jurisdictional grounds.

The State Department had only requested $35 million in PA security aid for 2019, a $25 million cut from the fiscal year 2017 request. Additionally, the Trump administration ended all economic and humanitarian aid for the Palestinians last year, after the PA began boycotting peace talks following the US decision to relocate its embassy in Israel to Jerusalem. The new law could ensure that the Palestinians no longer receive any security or economic aid from Washington well after Trump leaves office.

It also remains unclear whether the law could put other US aid recipients, such as Lebanon, Jordan and Saudi Arabia, on the hook for lawsuits, or if they will remain shielded from litigation under the Foreign Sovereign Immunities Act. Notably, the new law was only vetted by the Senate and House Judiciary Committees — with no input from the foreign affairs committee in either chamber.

“To me it’s just insane,” said Goldenberg. “A lot of people who are really experts on the Hill charged with making sure Congress doesn’t do stupid stuff like this didn’t see this.”

The liberal lobbying group J Street has also joined the chorus of calls to amend the law, faulting the Trump administration for a government shutdown that has distracted Congress from fixing it.

In a statement today, J Street wrote that “congressional leaders have expressed a desire to resolve the issue and allow the security assistance to continue” but blamed the shutdown for “jeopardizing a vital component of Israeli security.”

The powerful American Israel Public Affairs Committee, for its part, has not publicly weighed in so far.