The Palestinian Authority and plaintiffs backed by an Israeli NGO are competing for lawmakers’ ears as Congress seeks to amend an anti-terror law. 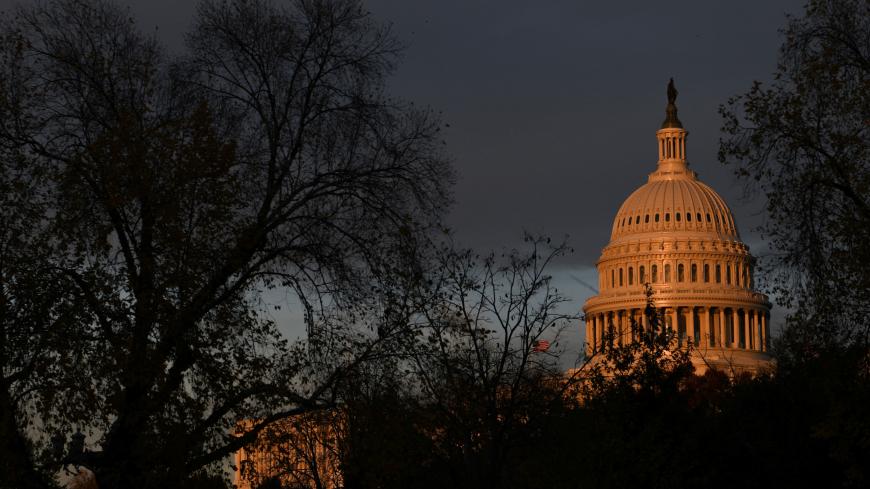 The US Capitol building is pictured at sunset on Capitol Hill in Washington, DC, Nov. 22, 2019. - REUTERS/Loren Elliott

The Palestinian Authority (PA) is in a lobbying war with an Israeli nongovernmental organization over congressional efforts to amend an anti-terror law that has resulted in the inadvertent end of US aid to the West Bank and Gaza.

Justice Department filings reviewed by Al-Monitor show the PA has dispatched the law firm Squire Patton Boggs to lobby Congress to amend the Anti-Terrorism Clarification Act, which has created a key legal barrier to economic, humanitarian and security assistance for the Palestinians.

The law as written opens the PA up to terrorism-related lawsuits if it accepts any US assistance, prompting the Palestinians to reject the last vestiges of US aid earlier this year. While the Donald Trump administration has deliberately eliminated economic and humanitarian aid for the PA, the White House has asked Congress to fix the law in order to preserve Palestinian security assistance supported by Israel.

The new filings include an email exchange between Patton Boggs associate Brandon Roman and Arthur Sidney, the chief of staff for Rep. Hank Johnson, D-Ga., who chairs a key House Judiciary subcommittee. The exchange indicates that Sen. Dianne Feinstein, D-Calif., is working on a letter regarding two competing proposals to amend the Anti-Terrorism Clarification Act with the hopes of eventually restoring Palestinian aid.

Sidney asks Roman to “please share the Feinstein letter and any language you might want us to include in a House letter for Chairman Johnson to consider.” Neither Johnson’s nor Feinstein’s office replied to a request for comment.

The Palestinian lobbying puts it at cross-purposes with victims of terrorism and their families who are suing the PA for damages.

The plaintiffs and their backer — the Israeli NGO Shurat HaDin — favor legislation introduced by Sen. James Lankford, R-Okla., that would create more legal liability for the PA than a competing Anti-Terrorism Clarification Act fix introduced by Rep. Ted Deutch, D-Fla., the chairman of the House Foreign Affairs panel on the Middle East. Shurat HaDin describes itself as organization that “seeks to bankrupt the terror groups and grind their criminal activities to a halt — one lawsuit at a time.”

The lobbying fight dates back to 2017, when an informal plaintiffs’ coalition hired law firm Arnold & Porter after a federal appeals court struck down a lower court ruling awarding the coalition $656 million in damages for acts of terrorism that occurred during the Palestinian uprising of 2000-2005. The plaintiffs have never paid Arnold & Porter more than $5,000 per quarter for lobbying purposes, but still scored a major win last year when President Trump signed the Anti-Terrorism Clarification Act into law after it sailed through Congress unopposed. The Berkman Law Office in Brooklyn registered as a foreign agent for Shurat HaDin in July after offering pro bono legal services since 2003.

Meanwhile the PA paid Squire Patton Boggs nearly $18,000 in the first half of this year to lobby on “the provisions of US aid.” The firm has represented the Palestinian Ministry of Finance and Planning since 2014. Its semi-annual disclosure form notes that it corresponded with Feinstein’s office twice in June and with a staffer on the House Foreign Affairs Committee seven times between February and May.

Although both the Deutch and Lankford bills purport to “fix” the law, critics say they both fall short.

“In the name of finding justice for American victims of terror, both ‘fixes’ are predicated on the view that, in order for the aid issue to be resolved, some other hook must be found or created to ensure that [the Anti-Terrorism Clarification Act's] fundamental objective is still served: Enabling the PLO and PA to be sued out of existence in US courts,” said Lara Friedman, the president of the Foundation for Middle East Peace.

The Lankford bill, which passed the Senate Judiciary Committee by a vote of 15-7 last month, is particularly stringent. It would open the PA up to the jurisdiction of US courts if Palestinian officials enter the United States or if they maintain a diplomatic office in the country. It would also render them legally liable if the PA refuses to withdraw its membership from United Nations agencies, seek membership in new UN agencies or provide funding to any Palestinian convicted of killing a US citizen.

“The legislation affirms the fundamental principle that being part of the international community — or engaging with the United States — demands first answering for prior support of terrorist acts,” Lankford said in a statement after the committee vote.

Feinstein argued at the time that the bill “could have negative and unintended consequences” by forcing the Palestinians to leave the UN or face potentially ruinous lawsuits.

“We would never place the same conditions on France or any other nation or government representative, so we should not do it to the Palestinians,” she said before the vote.

Feinstein floated an alternate amendment to the Anti-Terrorism Clarification Act, but it did not have enough support to pass the committee. Lankford’s bill for its part boasts three Democratic co-sponsors, but all three Democratic presidential candidates on the committee joined Feinstein in voting against it: Sens. Amy Klobuchar of Minnesota, Cory Booker of New Jersey and Kamala Harris of California.

Meanwhile, Deutch has nestled his competing amendment within an Israeli military aid bill pushed by the American Israel Public Affairs Committee. Deutch’s bill, which passed the House by voice vote in July, doesn’t contain the myriad legal hooks in the Lankford bill.

However, it does leave in place the Anti-Terrorism Clarification Act’s original language that could open the PA up to more litigation if it reopens its diplomatic office in Washington, which Trump closed last year. Still, the legislation does create an exception that would allow the PA to continue operating its New York-based delegation to the UN without facing new legal liability.