Will Trump administration provide COVID-19 aid to the Palestinians?

The US administration recently announced a global $274 million coronavirus aid package, but the Trump administration is nonetheless doubling down on the fight to eliminate all Palestinian aid. 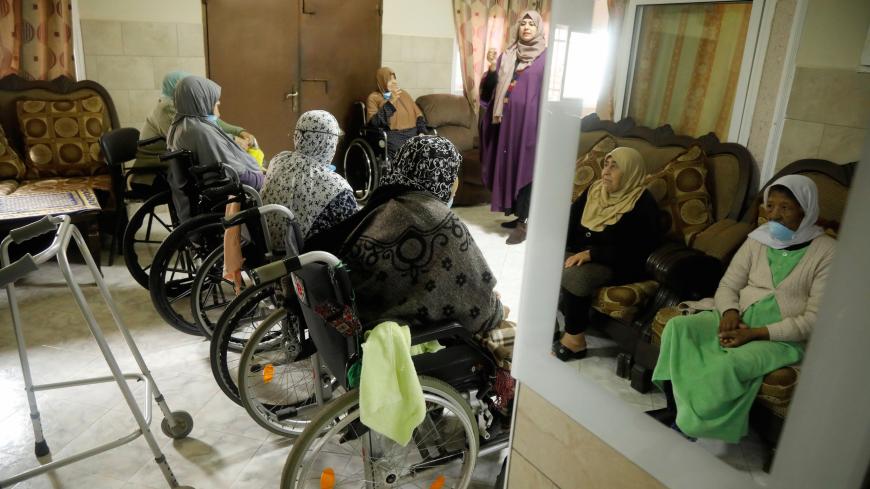 Elderly Palestinian women are reflected in a mirror during an awareness lesson on coronavirus disease (COVID-19) in a nursing house that stepped up preventive measures to protect the patients, in Jenin in the Israeli-occupied West Bank, April 2, 2020. - REUTERS/Raneen Sawafta

The United States recently touted some $40 million in emergency humanitarian assistance throughout the Middle East and North Africa to help combat the coronavirus pandemic. The West Bank and Gaza are not on the list of beneficiaries of this US largesse.

In fact, the Donald Trump administration is doubling down on its policy of eliminating Palestinian aid despite the COVID-19 pandemic. This has placed the White House at odds with the purse-string holders in Congress, particularly Democrats who worry that the Palestinian aid freeze could exacerbate the spread of COVID-19 throughout the West Bank and the densely populated Gaza Strip.

Bonnie Glick, the deputy administrator at the US Agency for International Development (USAID), defended the policy in an interview with Jewish Insider published today.

It’s true the Palestinians rejected the last vestiges of US security assistance last year because it would have opened the PA to potentially ruinous lawsuits under the Anti-Terrorism Clarification Act of 2018. But Glick also omitted that Congress removed that aid restriction last year as part of its annual spending package, paving the way for the assistance to resume without triggering the lawsuits. Furthermore, the Trump administration had eliminated all Palestinian economic aid before the Anti-Terrorism Clarification Act became law.

Additionally, Congress also appropriated $75 million in economic and development aid for the West Bank and Gaza alongside another $75 million for security assistance to support the PA as part of its foreign aid spending bill. While USAID legally has until the end of fiscal year 2021 to allocate that assistance, the Trump administration has yet to do so.

This has resulted in scrutiny from some Democrats, including powerful appropriators on the foreign aid panel. One foreign aid appropriator — Sen. Chris Van Hollen of Maryland — joined forces with Sen. Elizabeth Warren, D-Mass., to lead six other Democrats in a letter pressing Secretary of State Mike Pompeo on the issue last week.

“President Trump recently offered assistance to other countries fighting the coronavirus disease 2019 (COVID-19) global pandemic, including North Korea and Iran,” the lawmakers wrote. “This principle of providing humanitarian aid to those in need should also apply to the Palestinian people. We write to urge the administration to take every reasonable step to provide medicine, medical equipment and other necessary assistance to the West Bank and Gaza Strip (Palestinian territories) to prevent a humanitarian disaster.”

They set today as the deadline for Pompeo to reply to a series of queries on the $75 million that Congress allocated in Palestinian economic and humanitarian aid as well as the Trump administration’s plan to help halt the spread of coronavirus in the West Bank and Gaza. Today is the deadline for Pompeo to respond, and the State Department declined to respond to Al-Monitor’s request for comment on the record.

While there are roughly 150 recorded coronavirus cases in the West Bank and 12 in Gaza, Israel has confirmed more than 7,000 cases. The letter noted “the extreme vulnerability of the health system in Gaza” as a particular concern should the pandemic spread throughout the enclave, which is subject to an ongoing Israeli blockade.

The Trump administration did not ask Congress for any economic aid for the Palestinians in its 2021 budget request. Trump’s budget also makes security aid to the PA — funding that Israel also supports — contingent on a $200 million request to Congress to fund the White House’s Israeli-Palestinian peace initiative.

Still, outgoing USAID Administrator Mark Green reassured the House foreign aid spending panel last month that there are “no plans to close” the agency’s operations in the West Bank and Gaza, noting that the 45 local staff there are “currently involved in other projects.”

“We’re hopeful for a day where we can resume work [in the West Bank and Gaza] as part of the peace plan,” Green said.

Green struck a softer tone in his House testimony than his deputy, Glick, in her Jewish Insider profile. The profile noted that her sister, Caroline Glick, “is a well-known conservative journalist in Israel” who mounted a failed Knesset bid last year as part of the New Right party.

Bonnie Glick was also reportedly involved in last year’s decision to delay $115 million in economic aid to Lebanon, a decision Pompeo overruled in December while Trump was mired in an impeachment inquiry over his hold on Ukrainian military assistance.

Devex reported last month that several development organizations had lobbied the Trump administration for Glick to replace Green as acting USAID administrator when he resigns at the end of last week. Trump instead picked John Basra, the assistant USAID administrator for Latin America, to fill the post after Green’s departure.