The Donald Trump administration has pushed Congress to preserve Palestinian security aid only to find resistance from the president’s Republican allies. 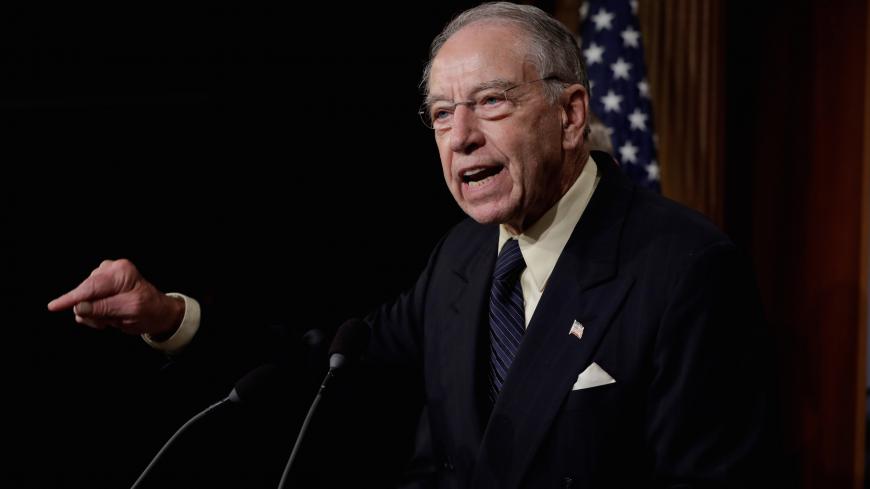 The State Department is seeking $35 million in security aid for the Palestinian Authority (PA) in the 2020 budget proposal released this week.

But first, it needs Congress to rewrite a new law that has inadvertently choked off all aid to the West Bank and Gaza, including programs favored by Israel. So far, Republicans aren’t budging.

Al-Monitor has learned that the State Department has reached a negotiating impasse with Sen. Chuck Grassley, R-Iowa, the author of the Anti-Terrorism Clarification Act, which Congress passed last year.

The law requires the PA to submit to the US judicial system as a condition for accepting US aid, potentially rendering it liable for as much as $656 million in terrorism-related judgments. As a result, the PA terminated all security, humanitarian and economic assistance programs with the United States in January.

“Grassley’s proposal addressed each of [the State Department’s] concerns and had the support of key lawmakers and victims,” an aide for the senator told Al-Monitor. “However, [the department] refused to support the compromise, asserting at the last minute that it would only support such a compromise if it further limits arguments American victims can currently make in court to establish jurisdiction.” The State Department did not respond to a request for comment.

Democrats in turn think Grassley is being too rigid.

“This is subject of frequent discussion, including this morning between us and our Republican counterparts,” an aide for Sen. Patrick Leahy, D-Vt., the top Democrat on the Appropriations Committee, told Al-Monitor. “We want a solution, although some are focused only on security cooperation between the Palestinian Authority and Israel, which is important, but so are humanitarian and development programs in the West Bank and Gaza. Senator Leahy tried hard to include a fix in the omnibus [bill], but the compromise that was proposed was not acceptable to the State Department and also raised concerns for Sen. Leahy and others, and so we are continuing to seek a solution.”

Meanwhile, the Trump administration’s priority remains security assistance, which Israel supports as part of its coordination with the PA against groups such as Hamas and the Islamic Jihad in the West Bank. By contrast, the State Department is requesting no humanitarian or economic aid for fiscal year 2020 after ending nearly all non-security aid to the West Bank and Gaza last year following the Palestinians’ rejection of the US recognition of Jerusalem as the capital of Israel.

US Agency for International Development (USAID) Administrator Mark Green told the House Appropriations Committee earlier this month that the Trump administration would work with Congress to alter the law. But it’s unclear how that would work given the political optics.

Some advocates have proposed adding a waiver allowing the Trump administration to continue to dole out security aid. But a lobbyist supportive of altering the law noted that “the administration really doesn’t want to affirmatively have to sign any waivers for any reason.”

Meanwhile, several aid organizations and lobbyists today asked Congress to save humanitarian and economic aid for the Palestinians at a hearing of the House Appropriations Committee’s foreign aid panel.

“We greatly appreciate the efforts being undertaken right now by leadership of relevant committees to find a workable fix to the unintended consequences of the Anti-Terrorism Clarification Act,” said Jeremy Ben-Ami, the president of the liberal lobbying group J Street. He argued that “it is essential that any such fix allow both security and non-security aid to resume.”

Vince Blaser, the director of the US-based nonprofit Intrahealth International, said his organization’s Palestinian health capacity project reduced referrals from West Bank health facilities to Israeli hospitals by 34% but was terminated “at USAID’s request” because of the law.

“The 120,000 patients plus that were affected by this closure is a reminder of the urgent need on a clear direction on humanitarian assistance in the West Bank and Gaza,” Blaser said.

And William O’Keefe, the executive vice president at Catholic Relief Services, told Al-Monitor that his organization is asking the Appropriations Committee to clarify that humanitarian aid does not fall within the law’s scope. He asked the committee to expend at least $225 million for assistance to the West Bank and Gaza for fiscal year 2020 despite the law.

Howard Kohr, the CEO of the American Israel Public Affairs Committee, which backed the law, remained silent on the issue despite Israel’s support for the security aid. When Al-Monitor approached Kohr after his testimony, he declined to comment.