US keeps aid flowing for Palestinian security forces, for now

Despite its deep cuts in aid to Palestinians, the US has continued to offer financial support to the Palestinian security services. 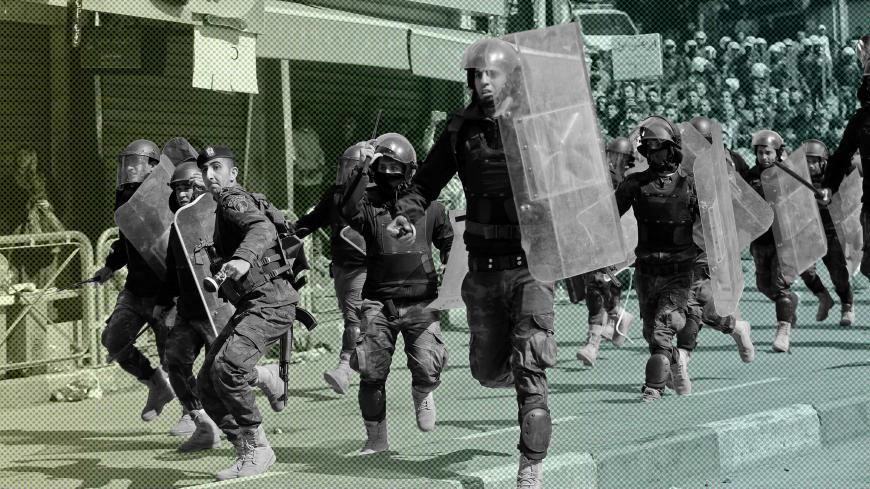 Members of the Palestinian security forces clash with demonstrators during a protest organized by Hizb-ut Tahrir against what organizers claimed were political arrests by the Palestinian Authority in Hebron, West Bank, Feb. 25, 2017. - REUTERS/Mussa Qawasma

RAMALLAH, West Bank — Although the United States has slashed funding to the Palestinian territories, the Palestinian security services continue to receive American assistance. In a recently released report, the US State Department praises the efforts by the Palestinian Authority (PA) to prevent terrorist operations against Israel.

The report notes the PA has “continued its counterterrorism and law enforcement efforts in the West Bank, where Hamas, PIJ [Palestinian Islamic Jihad], and the Popular Front for the Liberation of Palestine [PFLP] remained present.” It further states, “The PA Security Forces (PASF) constrained the ability of those organizations to conduct attacks, including through arrests of Hamas members planning attacks against Israelis.”

The State Department also noted Washington's own efforts. “The United States assisted the PA’s counterterrorism efforts by providing training, equipment, and infrastructure support to the PASF. US training and support assisted in the PA’s continued development of professional, self-sufficient, and capable security forces. The US also assisted the PA with criminal justice investigations and prosecutions of terrorist financing and terrorist-related activity.”

Yet the Donald Trump administration has frozen financial aid to Palestinians for infrastructure development, civil society projects and to the UN Relief and Works Agency for Palestine Refugees in the Near East (UNRWA). The most recent cut was on Sept. 14, when the administration halted $10 million in funding for programs designed to promote goodwill between young Palestinians and Israelis.

Political tensions have continued to run high between Washington and the Palestinian leadership in Ramallah since Trump's Dec. 6 announcement that the United States would recognize Jerusalem as the capital of Israel and shortly thereafter decided to transfer the US Embassy there from Tel Aviv. In addition, PA President Mahmoud Abbas has made it clear that he opposes Trump's much-hyped peace plan for the Middle East, which Palestinians say favors Israel. The deal has yet to be officially unveiled. Because of this opposition, however, even aid to the security forces might be in jeopardy.

The Israeli newspaper Haaretz reported on Aug. 2 that the US administration had transferred $61 million to the Palestinian security forces to maintain security coordination between the PA and Israel. A PA source speaking to Al-Monitor on condition of anonymity said that, thus far, there have been no signs that security funding is endangered. “The US believes [it] to be important for controlling security in the West Bank and maintaining coordination with Israel,” the source said.

That said, Abdullah Abdullah, head of the Political Committee of the Palestinian Legislative Council, told Al-Monitor, “We expect US aid to the security services to stop, given our clear stance against the current US administration and its bias toward the Israeli occupation.”

The author Ghassan Khatib, a former PA planning minister and former director of the PA Government Media Center, acknowledges the possibility of security cuts. “Washington is taking progressive steps in imposing sanctions on the PA, and we don't know where this could lead,” he told Al-Monitor.

He said the US administration does not think applying additional sanctions against the Palestinians will reduce the chances of achieving peace with Israel, which could suggest that sanctions are on the way regarding security aid.

“If the [Palestinian leadership] continues to refuse to deal with the US as a mediator in the peace process, neither the US nor Israel would be bothered should the PA [fold],” Khatib said. “The PA has several functions, and its existence is linked to the peace process project. If [the Palestine Liberation Organization] refuses to resume negotiations and accept the US role, [the PA's] existence may no longer be necessary from a US point of view.”

Nevertheless, the ongoing political crisis between the United States and the Palestinians could ultimately affect their security relationship. On Sept. 11, Israeli Public Broadcasting reported that the Palestinians had threatened to “suspend security and intelligence coordination between the PA security services and the CIA due to the US administration's decision to close the Palestine Liberation Organization office in Washington.”

Mohammed al-Masri, director of the Palestinian Center for Research and Strategic Studies in Ramallah, told Al-Monitor, “The security establishment … is an essential part of the fight against terrorism at the international level, and this is in our interest, so our people aren't described as terrorists,” said Masri. “The PA will play its part in the fight against terrorism even if the US cuts aid, because this role is strategic for it.”

Masri, a former intelligence director and former deputy head of the General Intelligence Service in Gaza, said that countries tend not to suspend security relations, even under the most hostile of circumstances, because political leaders can maintain lines of communication through them. For this reason, Masri said, it would be best to keep all channels for security communication open.