While Israeli Finance Minister Moshe Kahlon made a dramatic visit to Ramallah to announce a package of economic concessions, the Palestinians were less than impressed. 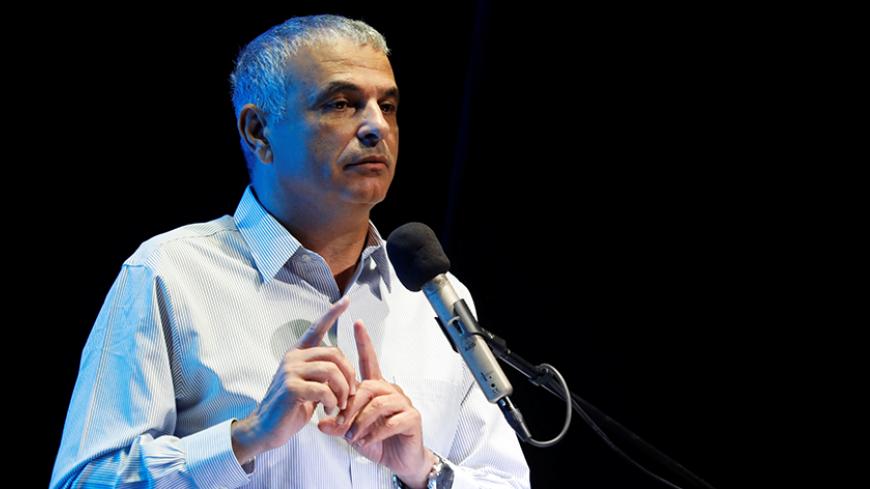 Israeli Finance Minister Moshe Kahlon gestures as he speaks at an event in Ofakim, southern Israel, May 29, 2017. - REUTERS/Amir Cohen

Finance Minister Moshe Kahlon and Maj. Gen. Yoav Mordechai, the head Israel's Coordinator of Government Activities in the Territories (COGAT) unit, traveled to the Palestinian headquarters in Ramallah to personally present Palestinian Prime Minister Rami Hamdallah with a series of concessions adopted by the Israeli defense Cabinet. Late on the evening of May 31, with the approval of Prime Minister Benjamin Netanyahu and Defense Minister Avigdor Liberman, the top Israeli representatives met with the Palestinian prime minister and the minister for civil affairs in the Palestinian Authority (PA), Hussein al-Sheikh. They presented them with what the Israeli Cabinet called civilian-economic steps.

On May 21, the eve of US President Donald Trump’s visit to Israel, the Cabinet adopted a package put together by Netanyahu and Finance Ministry and COGAT officials that was essentially a pre-emptive move designed to head off a US demand that Israel adopt some goodwill gestures toward the Palestinians. The measures approved included opening the Allenby Bridge (the passage between Jordan, Israel and the PA) around the clock, rather than a few hours per day. The passages controlled by Israel within the West Bank will be upgraded and kept open for longer hours, and an industrial zone employing Palestinians will be established adjacent to the Tarkumiye crossing.

The Cabinet also approved another step, which was met with opposition from some ministers. The concession that riled the ministers of right-wing HaBayit HaYehudi was deliberately vague. It called for “the coordination of Israeli enforcement policy in specific areas in Area C (under full Israeli control), adjacent Areas A (full Palestinian control) and B (Israeli-Palestinian shared security control).” The type of coordination and which areas were unspecified.

The Palestinians were told that Israel would approve Palestinian construction plans in Area C and consider granting permits for buildings that had already been built. In other words, Israel would not carry out demolitions in those areas.

The Palestinians wondered, is that it? For this, an Israeli delegation headed by the finance minister made such a dramatic late-night visit to Ramallah? A senior Fatah party official who spoke with Al-Monitor on condition of anonymity said cynically that the 1993 Israeli-Palestinian Oslo Accord had been signed with less fanfare. “What’s all the fuss about?” he asked. “Easing passage through the crossing — what about all the rest?”

He called the move “a bad joke” and predicted that the concessions would not satisfy the Americans, who expect Israel to adopt confidence-building measures ahead of diplomatic negotiations. “This isn’t serious, although truthfully, we weren’t expecting anything,” said the Palestinian source. “If Netanyahu thinks that economic measures, numerous and major though they may be, will divert the essence and our desire to reach a diplomatic arrangement, he’s wrong.”

Senior PA officials understand full well the pressure on Netanyahu and his concern about Trump’s unpredictable reaction. Unlike his widely publicized clashes with the Barack Obama administration, Netanyahu’s handling of ties with Trump are quite another thing.

After Trump left Israel on May 23, it was reported that the Trump administration was not satisfied with the Israeli concessions and is demanding that Israel hand over land in Area C to Palestinian control. Netanyahu was probably troubled. At the Likud's Knesset faction meeting on May 29, he told his party’s ministers and Knesset members that Israel does not have a diplomatic "blank check" from the Trump administration on the Palestinian issue. Netanyahu added that Trump was determined to achieve an Israeli-Palestinian peace agreement and Israel must act “diligently and responsibly.” This is probably why Netanyahu sought to present the Palestinian leadership with the concessions and why such a senior delegation rushed to Ramallah on May 31.

Not a single Netanyahu government minister has set foot in PA territory for years. Kahlon has met with his Palestinian counterpart Shukri Bishara three times, but all the meetings — designed to promote common economic plans — were conducted in Kahlon’s offices in Jerusalem or Tel Aviv.

In a February 2016 interview with Al-Monitor's Ben Caspit, Kahlon said he would "not be the one to bring peace" and was not involved in the diplomatic process. “On the other hand, I think that it is possible to advance economic issues and help change the lives of the Palestinians,” he said. “This is not some lofty goal. It’s entirely possible. There can be much better, more effective economic ties between us and them, and this in turn may help break the deadlock, increase trust and change the overall mood.”

But the goods he brought Ramallah will not do so. They are too minor, and the goal was not achieved. Although Kahlon was the envoy, the plan was quickly cobbled together by Netanyahu in a bid to placate the Americans without angering his coalition partner, HaBayit HaYehudi. The Americans were reportedly underwhelmed by the Israeli concessions in the shape of longer hours at the crossing points, and in any case, the HaBayit HaYehudi ministers voted against some of the measures.

After the Cabinet vote, Netanyahu aides sought to minimize the damage. Diplomatic sources told Ynet, “There were no defense-related decisions or easing on security matters, and there’s no change in the core issues in case negotiations are renewed.” For the skeptics, they added, “The [construction] planning authority remains in Israel’s hands. We [only] approved existing construction, which in any case will not be demolished.”

Once again, the prime minister has proven that he is a captive of the political right, despite his ardent desire to ease the international diplomatic pressure on him. If he can't even push through significant economic measures for the Palestinians, one can only imagine what will happen if diplomatic negotiations get underway and he is forced to make difficult decisions.