After Trump’s Israel love offensive, will Bibi reach a deal with him?

If President Donald Trump wants his Middle East deal to succeed, he must include in it the 2002 Arab Peace Initiative. 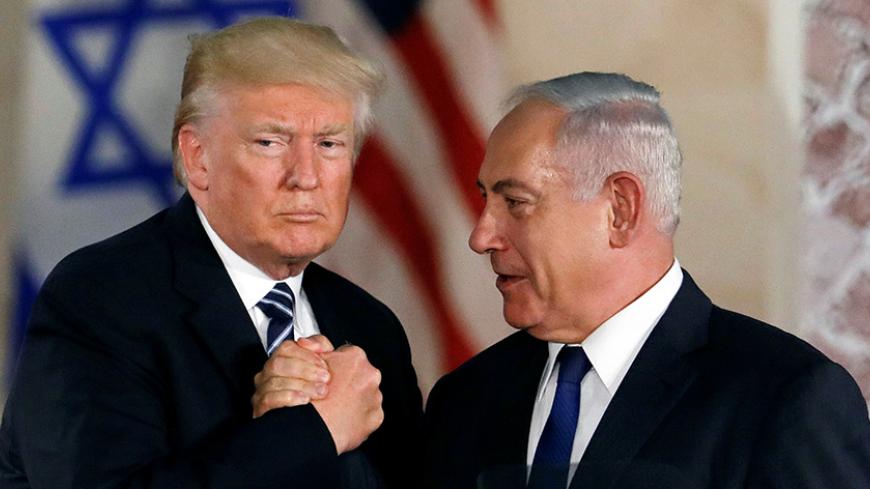 It was a full-fledged love offensive, on land, on sea and in the air. US President Donald Trump took advantage of his 26 hours in Jerusalem to shower every imaginable compliment on Israel's government and leaders. He went out of his way to convince Israelis that he is the No. 1 fan of the Jewish state and that there has never been a president more sympathetic to the Zionist idea than him.

In all of Trump's speeches and statements during the visit, he sounded as if he was reading off a page of messages put together by Prime Minister Benjamin Netanyahu's office. He reiterated the Israeli-Zionist narrative until he was blurry-eyed. He skipped over all the problematic issues, never mentioning construction in the settlements or the two-state solution. It was a very calculated and carefully planned move by Trump, whose policies concerning the Middle East peace process have been an island of sanity, common sense and measured responses, especially when compared to this president's reactions to all other issues.

Trump's team studied the history of President Barack Obama's failures in the region and learned the right lessons from them. Instead of starting off with Israel on the wrong foot, they put their best foot forward. First lay on the honey — only then comes the sting, if at all.

The move was a big success. Israelis, who had been growing suspicious of the orange-haired president, fell in love with him and his family again, and they did it at a dizzying speed. Unlike first lady Melania Trump, Israelis really did reach out to Trump, willingly extending a hand to him.

How much will Israel devote itself to this budding romance in the future? Will extending a hand to Trump include an agreement to walk hand in hand with him to wherever he wants? Here things can get a bit complicated, because what Trump still wants is to reach the "ultimate deal" — i.e., peace between Israel and the Palestinians.

There is no way Trump will be able to ignore the 2002 Arab Peace Initiative if he really wants to resuscitate the now moribund diplomatic process. But will Netanyahu be willing to enter into negotiations on the basis of that initiative? Given the current state of his coalition, the answer is no. One recommendation for the Trump team is that they study the fascinating history of contacts and talks between Israel and the various parties over this important initiative as they transpired over the years. They stand to learn a lot from that, including about how it still impacts us today.

What Israel finds most worrying about the Arab initiative is the part dealing with the right of return of Palestinian refugees. It is this issue and not Jerusalem or borders that will be the most volatile in any future negotiations. While there are bitter arguments in Israel about all the other core issues, the issue of refugees is the one exception. There is a rare, wall-to-wall consensus that there is nothing to talk about here. Israel cannot allow any significant number of Palestinian refugees to return to its territory. The question is: What is the exact position on refugees articulated in the Arab Peace Initiative? Is there any way to fit a square peg in a round hole and convince Israel that this is a reasonable starting point? The answer to that is yes.

In January 2007, Europe hosted the Madrid+15 Conference to mark the 15th anniversary of the historic Madrid Conference. At the time, Israel's prime minister was still Ehud Olmert. Former Minister Moshe Shahal, then a leader of the Labor Party, represented the Rabin Peace Center at the conference. While there, he suggested that the Arab League invite Olmert to address them and engage them in dialogue over a potential outline for a peace agreement. It was obvious that this could happen if only Olmert recognized the Arab Peace Initiative as the basis for negotiations.

Over the course of the conference discussions, Shahal formed a close relationship with Marwan Muasher, former Jordanian ambassador to the United States and to Israel, who is very close to the royal house. According to Shahal, Muasher, also one of the people who formulated the final Arab Peace Initiative draft, told him explicitly that the leaders of the Arab League are well aware that Israel is unable to absorb millions of Palestinian refugees in its territory. Shahal then asked Muasher to make a public statement about this. In the end, they agreed that he would write an editorial, which would be published in Haaretz daily. And that's exactly what he did. Muasher's piece was published on Aug. 13, 2008. It included the following statement: "For the first time, the Arab world committed itself to an agreed-upon solution to the refugee problem, addressing Israel's concern that Arabs will demand that 4 million refugees be sent to Israel.”

During that same meeting at the Madrid+15 Conference, Shahal delivered a speech in Arabic. According to an Israeli diplomatic source speaking on condition of anonymity, this led to a meeting between him and Osama al-Baz, senior adviser to then-Egyptian President Hosni Mubarak. When Baz asked Shahal how to advance the issue, Shahal suggested, "Invite Prime Minister Olmert to address the Arab League, just like President [Anwar] Sadat came to Israel to address the Knesset." Baz took the idea to Nabil Shaath and Jibril Rajoub, both senior Palestinian officials, and it was agreed to bring it to Mubarak. Mubarak was excited by the idea and instructed his foreign minister to call a meeting of the Arab League, with Egypt, Jordan, Morocco, Saudi Arabia, the United Arab Emirates and others in attendance. He then asked the secretary-general of the Arab League, his former foreign minister, Amr Moussa, to leave two seats open for Israel.

Meanwhile, Shahal tried to advance the idea from the other side, in Jerusalem. In March 2007, he met with Olmert in the presence of Dalia Rabin, daughter of late Prime Minister Yitzhak Rabin. As expected, Olmert was enthusiastic about the prospect. The problem was that the police investigation into his affairs was gathering steam. Soon after, he became a lame duck and resigned. When Shahal tried to get President Shimon Peres involved, he was blocked. Then, when Netanyahu came to power, Shahal presented the idea to him through national security adviser Maj. Gen. (Res.) Yaakov Amidror. Shahal told Netanyahu that a senior Saudi representative (apparently Prince Turki bin Faisal Al Saud) was prepared to meet with Israeli representatives about it. Shahal suggested that Netanyahu send him and Amidror to the meeting in order to get the negotiations started. Netanyahu considered it, and after some deliberation he suggested that Amidror join Shahal at the meeting without his explicit permission. Netanyahu did not want to give Shahal an opportunity to announce that he had accepted the initiative as a basis for negotiations.

At that point, these efforts came to an end. They were renewed two years ago as part of a major regional effort, which Netanyahu and Zionist Camp leader Isaac Herzog tried to initiate together with Middle East envoy Tony Blair, Shimon Peres and former Secretary of State John Kerry. This also came to an end when Netanyahu was forced to make the transition from theory to practice. The question now is whether President Trump will be able to create the iron bridge that Netanyahu can use to cross that Rubicon for the first time in his career.