Former Labor Party Minister Moshe Shahal, a strong supporter of the Arab Peace Initiative, tells Mazal Mualem that his former party has forsaken its leadership on peace with the Palestinians. 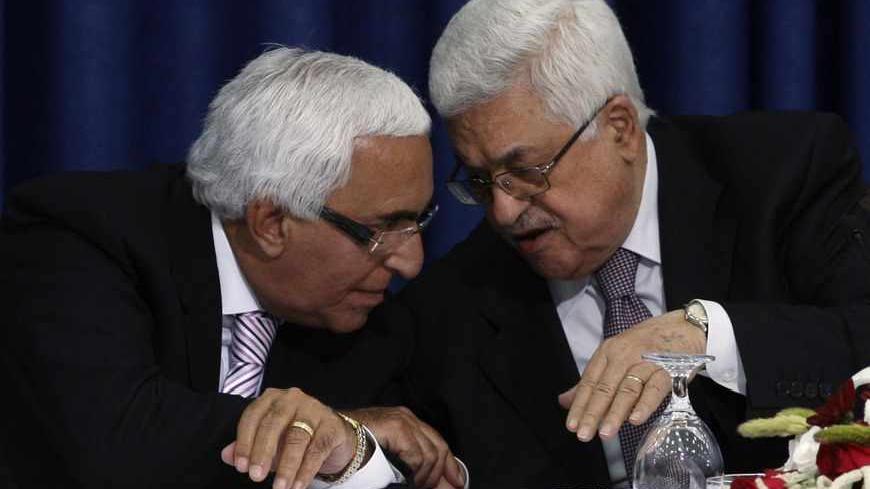 Palestinian President Mahmoud Abbas, right, speaks to Moshe Shahal, a member of the Israel Peace Initiative and a former Israeli Cabinet minister, during a news conference after Abbas met members of the Israeli Peace Initiative in the West Bank city of Ramallah, April 28, 2011. - REUTERS/Mohamad Torokman

“The Labor Party has lost its passion and its vision. It no longer fills its role as the leading advocate of compromise in the diplomatic process.”

This diagnosis was provided by none other than Moshe Shahal, who spent decades at the highest echelons of the Labor Party and was considered to be one of the cleverest politicians in Israel. Even today, over a decade after he retired from politics and returned to work as one of the country’s top lawyers, he continues to be involved in political and party affairs.

This week, Shahal appeared before the Labor Party’s Knesset delegation to provide an overview of the advantages in the Arab Peace Initiative. The reason for his visit was the surprising statement by Qatari Prime Minister Sheikh Hamad bin Jassim al-Thani at a meeting with US Secretary of State John Kerry that the Arab League is prepared to support an exchange of territories as part of a diplomatic arrangement between Israel and the Palestinians, based on the Arab Peace Initiative.

Together with old colleagues such as Science Minister and former Shin Bet head Yaakov Peri, Shahal has been at the forefront of an “Israeli Peace Initiative” that arose out of a sense of urgency and concern. In his opinion, changes in the region have made the Arab Peace Initiative more relevant than ever, but time is running out. He's an enthusiastic supporter of the Arab League’s proposals, a position that has not waned since the initiative was first conceived in 2002. In the ensuing years, he watched with frustration as one Israeli prime minister after another responded to the plan with apathy. This time, however, when Shahal left the Labor Party meeting to which he was invited by Chairman Isaac (Buji) Herzog, he walked away feeling bitterly disappointed. He has the sense that the party in which he was active for 27 years has lost its identity.

You were disappointed after meeting with the party’s Knesset members.

“There are good people, talented people, in the Labor Party, but there is something missing there. I quoted the maxim, 'Those who desire to set the world on fire must themselves burn.' Unfortunately, I feel as if the Labor Party has lost its fire in the diplomatic field, which was the very basis of its existence.

“I said, ‘You keep telling Prime Minister Benjamin Netanyahu that we’ll support you if you make progress in the peace process.' That’s all fine and good, but it’s not enough. The Labor Party must demand that Netanyahu include them in the team conducting the diplomatic negotiations.’ The problem is that Labor Party Chairwoman Shelly Yachimovich thought — and wrongly, I might add — that she has to move toward the center-right. It was the wrong step to take from a political perspective too, because people missed the ‘Labor’ label, which represented a sane form of Zionism to them.

“New Knesset members like Itzik Shmuli come see me, and I tell them to raise the banner of the diplomatic process. What’s the problem? Are we any less nationalist than the Likud? All the IDF’s generals were once in our party. The result is that we lost the support of the old-time Labor voters, and in effect, we lost ourselves.”

The Labor Party is in the opposition. How much influence could it have anyway?

“Even when serving in the opposition, they can and should be the leading force and provide an alternative to the policies of the right. I am not denigrating the discussion over raising the VAT, which is what the Labor Party was dealing with when I visited them, but the Labor Party also has a historic mission and ethos.

“'Go after that vision,’ I tell them. And it has nothing to do with who the head of the party is. There are some excellent people in the party, but they lack enthusiasm, and they don’t take advantage of the political tool at their disposal, which is the most effective means of achieving a breakthrough.”

Shahal adds: “The current leadership of the Labor Party does not meet the expectation that it be a leader in the peace process. It does not understand that it plays a key role: that of leading. After all, this is the party of former Prime Ministers David Ben Gurion and Yitzhak Rabin. Given its current inactivity, it will end up being a partner to the fact that Israel will pay a steep price in blood because of yet another missed opportunity, much like it did in the Yom Kippur War.”

What about Netanyahu? How do you read him? On one hand he speaks about two states, while on the other hand he ignores the re-launching of the Arab Peace Initiative.

“Much to my dismay, I can only conclude that Netanyahu is not interested in a diplomatic arrangement for reasons relating to his political survival. He has made the calculations and concluded that if he goes forward with it, he won’t have a government. Economy and Trade Minister Naftali Bennett would leave, and even members of the Likud itself would make problems for him. I hope that the Americans and Europeans force him to participate in the diplomatic process. I sometimes try to convince President Shimon Peres to act on this, and he does indeed do so every so often. But everything seems to indicate that the current leadership does not want to reach a peace arrangement.

“I find that depressing. I can see what is happening right in front of me. I am absolutely convinced that if they would let me conduct the negotiations, we would be signing a peace treaty with concessions in our favor within just three to six months.”

Is it that easy?

“It is obvious to me that 50% of the problems have to do with cultural differences and the state of distrust in our relationship with the other party. This can be resolved easily. Over the past few years I have maintained personal relationships with key figures in the Arab world, and I am closely acquainted with their positions and attitudes. I had a private meeting with Palestinian Chairman Abu Mazen a year ago, and I understood from him that reparations could be a solution to the refugee issue.”

So you’re not optimistic …

“No. I think that if there is no progress in the diplomatic process, we will end up with a military conflict within the year. It could start in the north or in the south. The only way to avoid this is a bold diplomatic breakthrough. Unfortunately, just as the peace camp has no leader, we have no leader who can bring about this breakthrough.”

Mazal Mualem started her journalistic career during her military service in Israel, where she was assigned to the weekly army newspaper, Bamachane. After her studies, she worked for the country's second-largest Hebrew-language daily, Maariv. In 1998, she joined English-language daily Haaretz, covering local governance, and later, she was appointed chief political analyst for that paper. After 12 years with Haaretz, she returned to Maariv as their chief political analyst.