While the establishment of "safe zones" has never been part of Russia's or Iran’s plans, their agreement to create "de-escalation zones" at this juncture serves the interests of both countries. 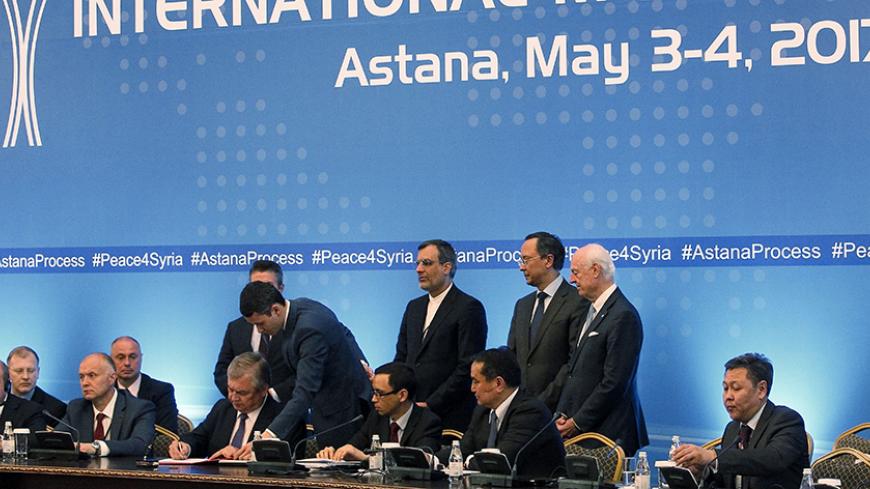 The latest round of Syria peace talks in Astana concluded May 4 with Russia, Iran and Turkey — the three guarantors of the cease-fire — agreeing on a plan to establish “de-escalation zones” in Syria. The initiative, which was first put forward by Moscow with the declared aim of securing the fragile truce and making it easier to concentrate on the political process, sparked different reactions by the various involved parties.

Although UN Special Envoy for Syria Staffan de Mistura commended the agreement as “an important, promising, positive step in the right direction,” the United States presented a more cautious approach, saying that more details are needed to judge the exact nature of the plan. On the other hand, while the Syrian government declared its full support for the Russian initiative, the main coalition representing the Syrian opposition in Astana refused to accept it, expressing reservations about its noninclusive territorial scope and also the role of Iran as one of the peacekeepers.

Meanwhile, although Iran as a signatory to the May 4 agreement has officially accepted Moscow’s plan and committed to actively take part in its implementation, there has not yet been any detailed statement by the Iranian side regarding what Tehran really thinks about the requirements and possible effects of the de-escalation zones or why Iran has decided to support the idea. The question of Iran’s position is important considering that for a long period of time it had persistently opposed the idea of creating any “safe zones” or “no-fly zones” on Syrian territory. So what convinced Tehran to reconsider its position?

Before going into detail, it could be argued that Iran shared the very same logic that pushed Russia to raise such an idea. In fact, in the aftermath of the US missile attack on a Syrian air base on April 6, Russia came to the conclusion that the probability of a more active US policy in Syria is growing high and that it is thus better to act before it becomes too late.

The American attack sparked renewed debate on the possibility of the establishment of safe zones in Syria by the United States and its regional allies. Some regional states — including Turkey — even publicly urged more US involvement in this regard. Thus, raising the idea of creating de-escalation zones — as a modified, “detoxified” version of the safe zones under the direct control of Russia itself — could be seen as a pre-emptive act by the Russians to prevent the United States and its allies from taking a step harmful to Russian interests. Since support for the government of Syrian President Bashar al-Assad has been the fundamental shared interest of Iran and Russia in Syria, the initiative should be welcomed in Tehran. This primary logic aside, there are some points relating to the May 4 initiative that could actually serve Iran’s interests.

First and foremost, by raising it within the framework of the multilateral talks on Syria, Russia has tried to consolidate and empower its own initiative as an internationally recognized agreement. In this vein, after the recent talks in Astana, Moscow asked the UN Security Council to endorse the May 4 initiative, hereby further underlining its international aspect. Since one of the key positions of both the Syrian opposition and its foreign backers has been objection to Iran’s military presence in Syria, the international aspect of the May 4 agreement and the fact that it names Iran as one of the peacekeepers could justify the presence of Iranian troops in Syria on the international stage. This is, in fact, the main reason behind the Syrian opposition’s objection to any Iranian role in the process.

Second, by seizing the opportunity to play an active role in establishing and monitoring the de-escalation zones, Tehran could enhance its international posture, proving that, as it has persistently declared, it is genuinely committed to preserving the cease-fire and facilitating the political process. Through this, the path would be paved for Iran to have an active role in any future political process on Syria.

Third, considering the overall developments on the battlefield, cooperation with the other peacekeeping forces from Russia and Turkey as well as their obligation to prevent clashes between the Syrian army and the armed rebels, Iran could avoid fighting on two fronts at the same time — namely, both with the armed rebels and with the more extremist and terrorist groups. This, in turn, could reduce the human cost of the Syrian war for Iran and help it concentrate more on fighting the Islamic State and the other terrorist groups that are considered to be more immediate threats to Iranian interests.

Fourth, given the locations of the four de-escalation zones proposed by Russia, in a line stretching from the northwest to the southwest of Syria, it could well serve Iran’s key interests to preserve its access to Lebanon through Syria — mostly to support Hezbollah — and allay concerns that rebels will seize these strategic areas. In fact, by establishing the de-escalation zones, the conflict would be frozen in the said zones — which is completely in line with Iran’s interests.

Finally, entering actual military cooperation with Moscow and Ankara in Syria could add a more serious, operational dimension to the so-called Russian-Turkish-Iranian axis on the Syrian issue. At a time when Turkey is becoming more and more dissatisfied with the US support for Syrian Kurds — whom Ankara considers terrorists — reinvigorating the aforementioned axis could prevent Turkey from taking radical steps, at least in the areas where Iranian interests are at stake.

All in all, although the establishment of safe zones in Syria was never part of Russia's and Iran’s plans, it seems that at the current juncture it is not only the best approach for Moscow and Tehran to preserve their core interests in the country, but it could also act as a factor that brings the two countries even closer together.