Iran welcomes the Russian/US truce initiative in southern Syria, but will Russia be able to keep juggling the broad, and often conflicting, interests of the various players? 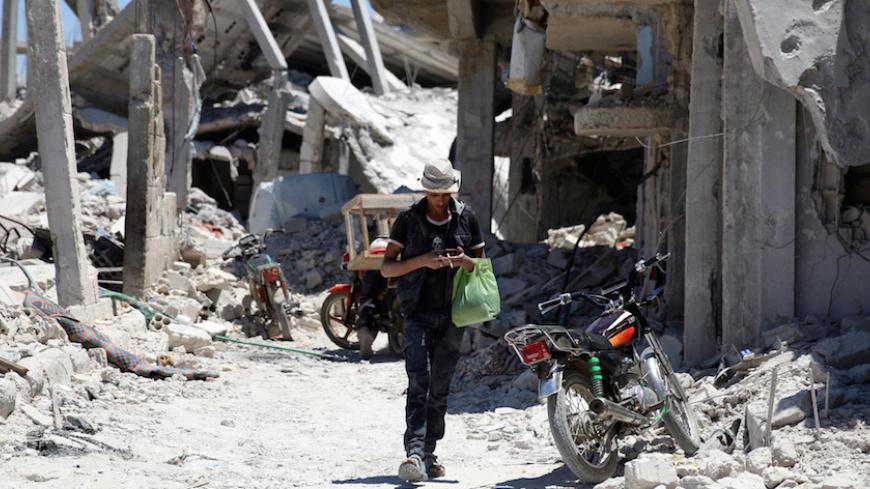 A man walks while using his phone past damaged buildings in Daraa, Syria July 15, 2017. - REUTERS/Alaa Al-Faqir

As various international peace initiatives have sought a political solution to the Syrian crisis, the most recent tangible breakthrough came from someplace new. On July 9, the long-awaited meeting between the presidents of Russia and the United States took place on the sidelines of the G-20 summit in Hamburg, Germany, where the two sides reaffirmed a recently reached cease-fire for southern Syria.

A day after the meeting, Russian Foreign Minister Sergey Lavrov said Russia will continue cooperating with the United States on the de-escalation zones in southern Syria. He further pointed out that Russia, the United States and Jordan will establish a center in Amman to coordinate all the details of the zones.

The very fact that the US-Russian truce initiative has survived its first week of implementation suggests that this time the two major powers have more incentive to cooperate on their areas of shared interests regardless of how partial and non-inclusive they could be.

The significance of the recent cease-fire agreement becomes clearer given the latest round of negotiations being brokered by Iran, Russia and Turkey in Astana, Kazakhstan. The July 4-5 gathering stopped short of reaching an agreement, as Ankara reportedly objected to some details of the de-escalation zones. At the same time, the other main international peace initiative on Syria, namely the UN Geneva talks held July 10, has also failed to make a real breakthrough. Those talks did not even manage to bring representatives of the Syrian government and the opposition to the same table for direct negotiations.

So why is the US-Russian truce agreement in southern Syria experiencing a successful start when other recent initiatives have yet to achieve consensus on basic issues? To answer this query, one must consider the role Russia seeks to play in Syria.

Generally speaking, it seems Russia has been trying to reach a series of bilateral and multilateral working structures with the various parties involved, with Moscow as the main actor in all those structures. On one hand, it has invested heavily in the Astana talks, and by doing so it has managed to effectively sideline the Geneva process and replace it with a Moscow-centered peace initiative.

Moscow has so far tried to build on its fundamental shared interests with Tehran and Ankara — for example, pushing for a political transition plan in Syria while preserving a minimum level of influence for each of the three parties in areas they deem vital for their national interests. But Russia also faces the task of bringing Iran and Turkey to a wider compromise on their long-term interests in Syria; this goal is difficult mainly because Iran prioritizes the defeat of all terrorist and armed rebel groups over the start of a political transition while Turkey wants to use the rebels it supports and the territories they have under their control as a bargaining chip in any future political talks.

Although Turkey was the main obstacle to an agreement at the latest talks in Astana, Russia seems willing to keep bargaining to gain Ankara’s cooperation by giving it some points in northern Syria, an area vital for Turkey because of its concerns over the growing role of Kurdish groups. At the same time, by declaring that Tehran will host the next meeting of the Astana working group in early August, Moscow tried not to alienate Iran and to keep it active in the Astana talks.

Meanwhile, the Syrian truce agreement reached by Russia and the United States could be viewed as Moscow's attempt to prevent any further escalation with Washington and its allies. Syria has, in effect, been divided into different zones of influence between the regional and global powers, and Moscow has shown willingness to recognize the US zone of influence in southern Syria. Displaying a softer stance in the south is also vital for Moscow to preserve its good relations with Israel. Thus, Russia is additionally trying to ease Israel’s concerns over the presence of pro-Iran groups near its borders.

All in all, it seems Russia has taken the first step toward recognizing different zones of influence in Syria. To Moscow, the key objective here is to prevent any escalation that could potentially lead to its further involvement in the Syrian crisis. At the same time, these various sets of agreements could potentially introduce Moscow as the real peace broker in Syria.

However, given the widely divergent interests of the various parties involved, what lies ahead may perhaps prove too difficult a task for Moscow — especially when it comes to its so-far successful cooperation with Iran. Acknowledging the three main Iranian interests in Syria as maintaining the government of President Bashar al-Assad, preserving access to Lebanon through Syria and protecting Syria’s territorial integrity, one is left to wonder how the Russians plan to simultaneously pursue diverging commitments. How can Iran’s access to Lebanon be preserved while still addressing Israel’s security concerns? This dilemma was clearly reflected in Israeli Prime Minister Benjamin Netanyahu's opposition to the truce, saying that although it would keep Iran away from Israel's borders, it makes the Iranian military presence in Syria permanent. Moreover, how will Moscow work toward preserving Syria’s territorial integrity while also aiding the division of the country into different zones of influence?

Aware of these issues, Iran’s official response to the US-Russian truce deal was to insist that the cease-fire be expanded to all of Syria and also be merged into the Astana talks. If the Russians want to keep Iran fully onboard, they will need to find a path out of the current maze. If not, they might be faced with the hard choice of deciding whom they regard as their main partner in determining Syria's future.