Who's behind campaign to probe Rouhani's doctoral thesis?

Accusations of plagiarism in President Hassan Rouhani’s doctoral thesis first surfaced in 2013. Four years later, ahead of Iran’s May 19 presidential election, a group of students has decided to look into the matter more closely. 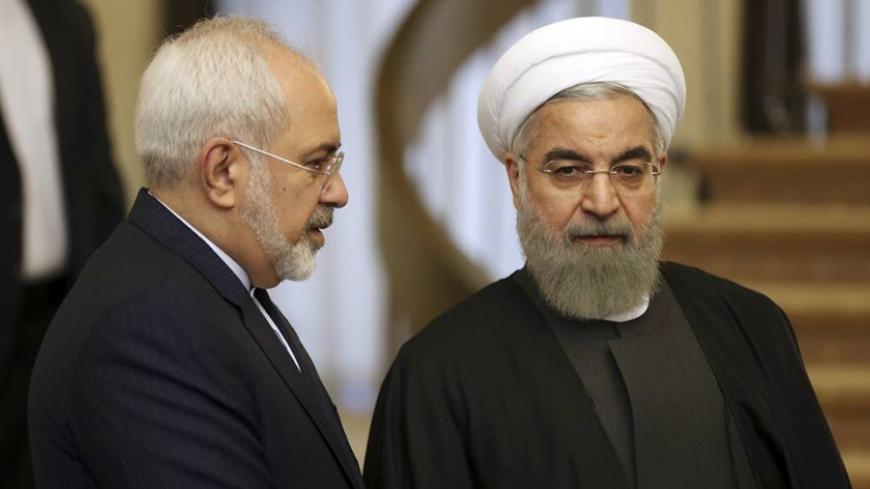 TEHRAN, Iran — A group of students in Iran and the United States has launched an initiative — with apparent backing from conservative Iranian lawmakers — to evaluate the originality of Iranian President Hassan Rouhani’s doctoral thesis. Rouhani submitted his thesis, titled “The Flexibility of Sharia With Reference to the Iranian Experience,” to Glasgow Caledonian University in 1998.

In 2013, following Rouhani’s election as president, a London-based Iranian writer claimed that parts of the thesis had been copied from a book by Afghan academic Mohammad Hashim Kamali.

The claim soon made its way into some foreign media outlets and led Glasgow Caledonian to release two abstracts from Rouhani’s master's and doctoral theses, though the Scottish university failed to publish the works as a whole.

Four years later, as Rouhani is running for a second term, a group of students is further pursuing the claims of plagiarism. The Rouhani Thesis campaign reports its findings on its website and on Twitter. The group says it has so far found that chapters 1 through 4 of Rouhani’s thesis have been respectively at least 39%, 43%, 40% and 82% plagiarized.

Al-Monitor spoke with two members of the Rouhani Thesis initiative to find out more about the nature of their work. Iowa-based Keyvan Ebrahimi confirmed that members of the collaborative seek “both political and academic objectives in their campaign,” adding, “It is a joint project conducted by over a dozen students from various universities in Tehran as well as the US who prefer to remain anonymous in fear of retribution.”

According to Ebrahimi, “We were after this story for about three years, but what prevented us from examining Rouhani’s thesis sooner was the fact that it was not accessible until recently when the Ministry of Science, Research and Technology of Iran made the text available via a search engine at the website of the Research Institute for Information, Science and Technology.”

Ebrahimi explained to Al-Monitor, “We used powerful plagiarism detection tool iThenticate to analyze Rouhani’s thesis. Considering the fact that his dissertation dates back to 1998 and the iThenticate database lacks some books as old as [published in the] 1960s or before [which were referenced in the thesis], we sometimes have to buy old books to personally compare them with the main text. It is a difficult task, and we have dedicated much time and energy to it.”

The nongovernmental organization Justice and Transparency Watch (JTW) is described on the campaign's website as the backer of the Rouhani Thesis initiative. JTW was established in 2015 by a group of then-parliamentarians and conservative political figures. A look at its founding members suggests that lawmaker Mohammad Dehghan is one of its board members. Dehghan was the campaign chief of Tehran Mayor Mohammad Bagher Ghalibaf, who stepped aside in favor of conservative presidential candidate Ebrahim Raisi on May 15.

When challenged by Al-Monitor about the JTW’s political leanings, Ebrahimi said, “We decided to accept the NGO’s support because we were worried about being targeted by Iran’s security apparatus in the future.”

Another member of the Rouhani Thesis initiative, who only spoke on condition of anonymity and went by "Mahdyar," told Al-Monitor that their work is “totally voluntary and no one has paid them a penny to cover their costs.” Both Ebrahimi and Mahdyar strongly deny having any links with Ghalibaf’s campaign team.

Mahdyar also expressed amazement at the seeming lack of coverage of the campaign. “Although we informed the Iranian online community of our work, President Rouhani’s rivals and their media outlets covered the story briefly.”

Since the first accusations of plagiarism, Rouhani’s only response has been a short video clip published on his YouTube account in July 2013. The 30-second footage depicts Rouhani receiving his doctoral degree from Glasgow Caledonian University.

In 2013, Iranian academic Seyed Mohsen Amin, who supervised Rouhani’s doctoral research, rejected the allegations against his former student and told BBC Persian that there is no doubt about the authenticity of the thesis.

Al-Monitor spoke with Tehran University professor Sadegh Zibakalam about the Rouhani Thesis campaign. Zibakalam believes that the level of name-calling and finger-pointing in this year's election campaign is unprecedented in Iran. He accuses Rouhani’s rivals of politicizing the matter of his doctorate, saying, “If [members of the campaign and their backers] claim to be ethical, nonpolitical people, why didn’t they go after [plagiarism claims] before and [why did they only begin] to spread their accusations right before the election?”

According to Zibakalam, “Those who are behind the campaign want to create doubts in people’s minds ahead of the election in an effort to make voters believe that Rouhani is dishonest.” He added, “Machiavelli should make a trip to Iran and learn Machiavellian principles from these people [Iranian conservatives].”

Human rights lawyer and then-associate fellow at the University of Oxford, Kaveh Moussavi, told the Telegraph, “I do not know if Mr. Rouhani has engaged in plagiarism or not. What I do know is Glasgow Caledonian is not an obvious place for a Ph.D. in a subject dealing with Shia jurisprudence or Iranian politics.”

Events took a new turn when the representative of Fars Province in the Assembly of Experts, Ayatollah Ali Akbar Kalantari, stated in an open letter that major segments of chapter 4 of Rouhani’s thesis have been translated from one of his books and used without any reference to the original text or the name of the author. The senior cleric thus called on the science and technology minister and the head of the parliamentary higher education committee to pursue the allegations of plagiarism.

Al-Monitor asked Ebrahimi and Mahdyar what the Rouhani Thesis initiative's next move will be if the incumbent is re-elected May 19.

Mahdyar said he hopes that “the results of this analysis lead to the creation of a neutral, independent panel to investigate the allegations and authenticate what they have found as evidence of Rouhani’s plagiarism.” Ebrahimi concluded, “Expecting President Rouhani to apologize for having plagiarized other people’s work is a big dream that is unlikely to come true, but we hope to at least see him stripped of his doctoral degree.”

The two young men are also hopeful that their campaign will pioneer an anti-plagiarism movement in Iran and prevent future cases of plagiarism that have tarnished the names of Iranian scientific institutions and academics in recent years.