Though some progress has been made since Iranian presidential candidate's wives first stepped into the campaign spotlight in 2009, they still do not fully participate in their husbands’ campaigns. 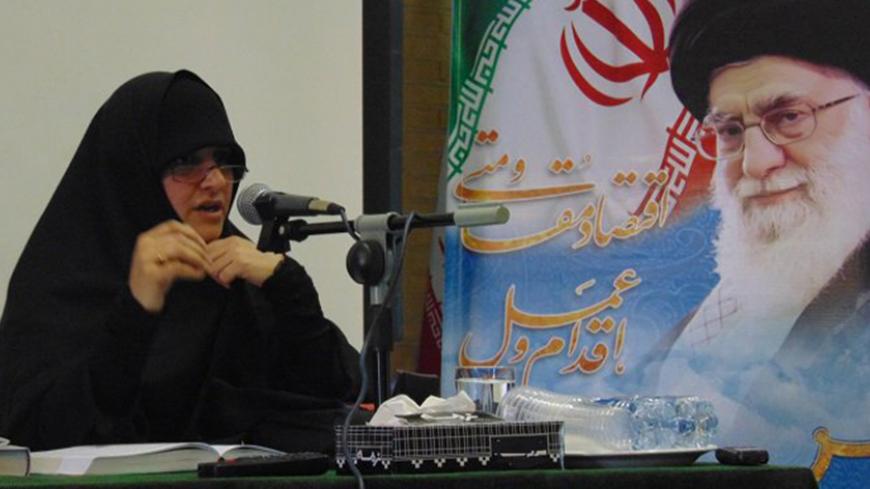 The position and role of the first lady are not clearly defined in the political and social structure of Iran. Until the 2009 presidential vote, the wives of candidates did not even participate in election campaigns. Reformist candidate Mir Hossein Mousavi was the first presidential candidate to campaign alongside his wife, Zahra Rahnavard. Breaking tradition, they appeared in front of photographers and reporters holding hands. At the time, Rahnavard was the first female professor at the College of Fine Arts, a position she was awarded in June 2008.

After Rahnavard’s appearance alongside her husband, then-incumbent Mahmoud Ahmadinejad also did some campaigning with his wife, Azam al-Sadat Farahi, who is a graduate of Iran University of Science and Technology. During Ahmadinejad’s eight years as president, Farahi accompanied her husband on some of his domestic and international travel and also visited charity organizations.

The trend continued in the 2013 presidential elections. Yet among all the wives, Hassan Rouhani’s wife is the least known. Neither her first nor last name were even mentioned in a report about the families of the candidates published by the semi-official Iranian Students News Agency four days before the election. After Rouhani became president, his wife’s name and a few other details about her found their way into the media, gleaned from Rouhani’s memoirs and interviews.

In a conversation included in Alireza Salavati's book "Siyasatmadaran-e-Javan" ("Young Politicians"), Rouhani says of his marriage, “My family insisted that I get married. I was about 20 years old. I got married in the year 1968. … My father was insistent and my mother was, too. I was not reluctant myself, either.”

Rouhani’s wife, Sahebeh Arabi, was born into a religious family in Semnan in 1954 and married her 20-year-old cousin when she was 14. Little is known about her educational background, and she does not participate in public political or social activities. The couple have three daughters and two sons. It is said that their oldest son, Mohammad, died in Rouhani’s home at the age of 19.

There are many rumors about the death. Hossein Mousavian, a member of the nuclear negotiation team during Mohammad Khatami’s presidency and close to Rouhani, claimed in a 2013 interview with Time magazine that Rouhani’s son was murdered in a political crime that was never solved, the killer never identified. Mousavian claimed that Rouhani investigated the murder for many years but eventually decided to stop pursuing it.

Rouhani and his family have yet to offer an official explanation for Mohammad’s death. However, during the past few days, after Mohammad was brought up by one of the websites that support Rouhani’s main rival, conservative candidate Ebrahim Raisi, a classmate of Mohammad’s at Farhang High School in Tehran (which admits exceptionally talented students), posted a note about Mohammad’s death on Instagram. Mehdi Yazdani Khorram, a writer and journalist who attended Mohammad’s 1997 funeral, wrote about his old high school friend’s “voluntary” death, saying, “He was young, perhaps a little rebellious, lonely and of course in love.” He also stated that it is “indecent” to take advantage of his death for political purposes.

Arabi became slightly better known after Rouhani was elected president in 2013. On April 20, 2014, Fars News Agency covered Arabi's hosting of a “royal, all-female banquet” in Sa'dabad Palace on the occasion of Iranian Women’s Day. The article, which portrayed the event as a glamorous party, caused an uproar. Aside from government figures, certain female activists, actresses, directors and writers were invited to the banquet, which included a fashion show and dance performance.

While Rouhani’s wife is once again absent from the campaign, the wife of conservative cleric Raisi has been playing a minor role in his.

The first time that Raisi spoke publicly about his wife was in a campaign video. He told viewers, “She first received her bachelor's degree in midwifery and then changed her field and got a Ph.D. from Tarbiat Modares University. She is currently a faculty member at Shahid Beheshti University and is also collaborating with the Supreme Council of the Cultural Revolution. Her writings and discussions are mostly about pedagogy.”

Subsequently, media outlets supportive of Raisi published an image of his wife and a brief bio: “Jamileh Alamolhoda, daughter of the Friday Prayer leader of Mashhad and an assistant professor at Shahid Beheshti University.”

Her father, Ahmad Alamolhoda, is also the representative of the supreme leader in Khorasan Razavi province. He is known for having endorsed Ahmadinejad, supporting the activities of the morality police and banning concerts in the city of Mashhad.

Raisi and Alamolhoda married in 1983 and have two daughters. Alamolhoda is described as an assistant professor and holder of a Ph.D. in in Islamic pedagogical philosophy on the website of Shahid Beheshti University. She is currently the head of the Family Research Institute at Shahid Beheshti University while also heading the Education Committee of the Supreme Council of the Cultural Revolution.

Alamolhoda’s entry into the public arena has created some controversy. A video was shared over social media of her presenting a paper at the Rhodes Forum in 2015. Some viewers have criticized her broken English and even questioned her academic credentials.

Alamolhoda gave an interview to Samaak News, a website that has endorsed Raisi, but her husband's campaign saw that it was quickly removed from the website. In the interview, Alamolhoda spoke about her and her children’s reaction to her husband announcing his candidacy for the presidency, saying that her children started crying and that she herself passed out and had to be taken to the hospital.

As the campaigning began, Alamolhoda delivered a speech before a female audience at a rally in the northwestern city of Hamedan. At the event, Alamolhoda referred to the presidential elections as a battle between two streams of thought on women’s rights and women’s affairs and spoke against a "legacy of Western civilization" in which "womanhood is lost and women behave like men.”