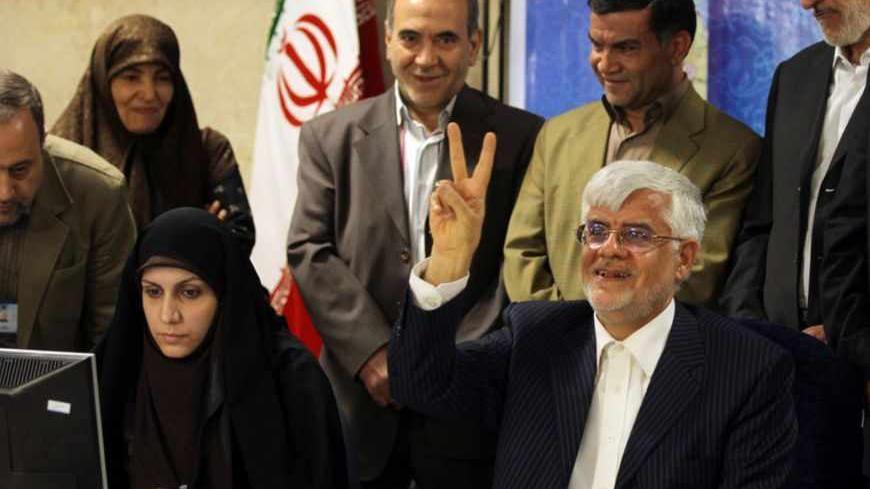 Iranian former Vice President Mohammad Reza Aref flashes a victory sign as he registers his candidacy for the upcoming presidential election at the Interior Ministry in Tehran on May 10, 2013. - ATTA KENARE/AFP/Getty Images

Among Iranian president candidates, Mohammad Reza Aref stands out as the lone reformist and the one contender who regularly appears at campaign events accompanied by his wife, Hamideh Moravvej. She has attracted Iranian media attention for standing "un-Islamically" close to her husband, waving at supporters like the wife of a Western politician and wearing shiny, silver-colored clothing that some in North Tehran have dubbed “disco ball,” for the 1970s dance floor ornament.

Moravvej also wears sneakers, and her manteau — the religiously required tunic or cloak for women in Iran — is a tad clingier and shorter than recommended. Moreover, she does not wear a chador, the black, all-enveloping tent-like robe favored by traditional religious women and the wives of more conservative candidates.

Other candidates’ wives have also appeared with their husbands but have done so far less frequently. In taking such a prominent role, Aref’s wife appears to be channeling Zahra Rahnavard, the wife of 2009 presidential candidate Mir Hossein Mousavi. A sculptor, former dean of the all-girls al-Zahra University in Tehran and well-known figure from the 1979 revolution, Rahnavard campaigned actively with Mousavi and was given credit for attracting the support of thousands of young women for him. She also paid the same price as he did of being put under house arrest following the government crackdown on the Green Movement. Moravvej, like Rahnavard, is a professional woman; in Moravvej’s case, a dermatologist.

All the candidates post pictures of women at their rallies, so obviously they care about attracting the female vote. The way their supporters are dressed, however, signals major differences in social and cultural attitudes. At rallies for Aref and the pragmatist Hassan Rouhani, the women wear colorful scarves that show a good bit of hair. When the conservative candidate Saeed Jalili appears, the women in the audience are in full chadors. In most cases, the women’s faces are barely visible. Women who choose to or are forced to cover themselves excessively are called “one-eyed,” since only one of their eyes is visible under the veil.

Jalili, Iran’s top nuclear negotiator and a loyal follower of the supreme leader, Ayatollah Ali Khamenei, is unlikely to attract the votes of professional women but not just because of the way his female supporters dress. He gave a speech on May 29 in which he said that women’s most important role was to stay at home and have children. Such a perspective does not go down well in a country where 60% of university graduates are women.Strangely, however, Jalili tweeted on Wednesday (June 5) that his own wife is a medical doctor. One wonders how she manages to practice and also fulfill her wifely duties!

Another way in which Moravvej differs from other politicians’ spouses is that she has talked openly to the media about the fact that she buys her husband’s clothes and shoes because, according to her, he feels uncomfortable dealing with salespeople. A conventional, religious Iranian man would not let a woman — even his wife — decide what he is going to wear or purchase such personal items.

Aref has defended his wife against criticism of her mode of dress. He notes that she was a university student prior to the 1979 Islamic Revolution, as was he. They visited Ayatollah Ruhollah Khomeini, the leader of the revolution, while he was in exile outside Paris, and according to Aref, the grand ayatollah himself approved of his wife’s form of Islamic coverage.

It remains unclear how much of an edge Moravvej will give the reformist candidate. There is still talk that either Aref or Rouhani will drop out before the June 14 vote to give one of them a better chance at winning the election or surviving until a second round.

A female candidate for president might have a better chance of attracting women’s support, but that remains a bridge too far for the Islamic republic. Although a number of women registered last month to run for president, including one woman who gave her name as Elizabeth, the Council of Guradians, which vets presidential candidates, eliminated all of them.

Several of the women told Iranian media that they had applied to run for president because they were unemployed, which is a problem for men in Iran and even more so for women.  Since they were rejected from the jobs they had applied for, they said, another rejection would not be too difficult to bear.

The Interior Ministry did not say how many of the 686 presidential hopefuls had been women. According to a joke circulating in Tehran, people are saying they will not bother to vote because Elizabeth was disqualified, and she was their only hope.

Mehrnaz Samimi is an Iranian-American journalist.