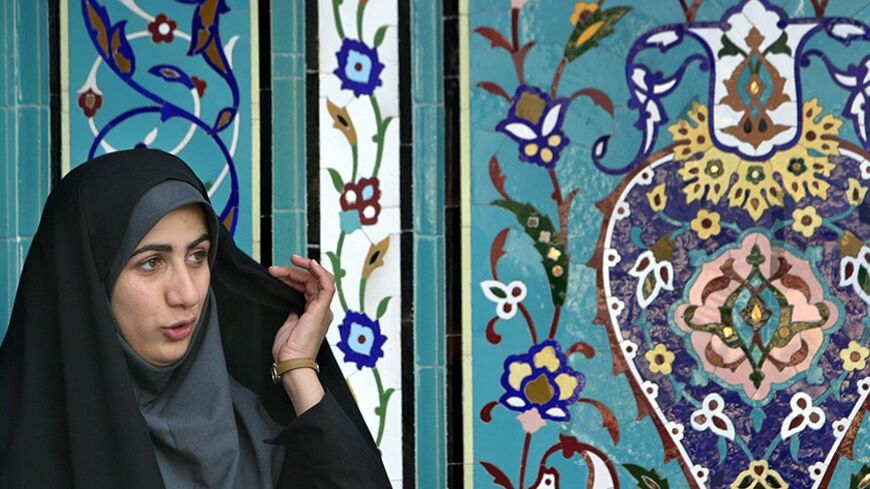 A young Iranian veiled woman stands in front of a mosque at the 18th Tehran International Book Fair, May 8, 2005. - REUTERS/Morteza Nikoubazl

On Jan. 7, 1936, Iran's then-ruler Reza Shah Pahlavi unveiled women by force as part of his clash with the clergy. On the anniversary of this significant event, influential conservative clergyman Ayatollah Safi Golpayegani issued a lengthy statement in the form of a news release titled “Warning Iranian Women,” in which he expressed disappointment in women who opt to dress more fashionably and revealingly. He referred to the “hip” version of Iranian women’s wear as “covering skin and concealing private parts as it should, but [falling] short of true coverage … and on the verge of being defined as haram.” He went on to recommend the chador as the best choice of coverage, repeating what many Iranian officials have said over the years. His mindset is concluded in the famous phrase describing the veil: “Chador, the superior hijab.”

I interviewed Mohammad Ali Abtahi, a reformist clergyman and former Iranian vice president who lives in Tehran, and asked his take on the chador, Ayatollah Safi’s comments and his religious interpretation. Abtahi told Al-Monitor, “From an Islamic standpoint, we as members of the clergy are to preach the right [path]. That’s all. We are not to pursue people’s behavior, nor should we attempt to correct it through publicly condemning it.” He told Al-Monitor, “Chador is an Iranian option of coverage, and choosing to wear it or opting out does not define people’s religious beliefs. It’s simply like any form of dress. But what makes this a sensitive issue is that since hijab is mandatory in Iran, less coverage is interpreted as resisting the regime. And that’s why all hell breaks loose when it comes to women’s hijab.”

Shahram Shabpareh, an Iranian pop singer, has an old song called “Dokhtar Chadori” (Veiled Girl), in which he attempts to convince his crush to ditch the chador. He likens the garment to a black cloud covering the pretty face he’d rather see in the clear.

Iranians created the chador, which is free-standing overall head-to-toe cover. It’s held in place by the hand or the more modern elastic band to make movement easier. Though there is much dispute over the roots of the word and the origin of its creation, the chador is mostly believed to have been created in the Safavid era, around the time that Shiism was declared the official religion of Iran.

In Farsi, the word chador means "tent," and the name implies the head-to-toe coverage the garment provides, though some literature suggests otherwise. A woman who wears a chador is referred to as chadori. The “formal” chador is black and plain and offers near-total concealment. This type of chador is worn to the workplace, social gatherings and formal events. The “casual” chador is lighter, both in texture and in color, and it’s usually worn when women answer the door or step outside for just a minute. In some cities of Iran, the light form of chador — generally white, with a colorful flowered print — is worn as outerwear.

Outside of Iran, in Shiite-populated sections of Lebanon and Iraq, some women wear the black chador, apparently inspired by Iranians. This specific form of coverage is mostly exclusive to Iranian women, which is why some officials refer to it as the “national style.”

Some Iranian women and girls dislike and even despise wearing chadors, but are pressured to do so by their husbands, families or in-laws. For some, there are religious considerations and others are concerned with tradition or gossip.

The chador is not the only means of coverage for Iranian women, nor is it mandatory. In fact, chadori women can even make up the minority, particularly in bigger cities. The mandatory coverage — which many women discover ways to maneuver around — is a piece of clothing called a manteau, required to be worn as an over-garment. Hair is to be covered by scarves, and most chadori women wear scarves under the veil to conceal their hair.

Massoumeh, a 25-year-old college student living in Kerman, told Al-Monitor that she hates her black chador but is forced to wear it by her parents. She adds, “So I take it off, fold it and put it in my purse as soon as I’m a few blocks away from home, and I do the opposite when I get close to my house. I’ve a hunch that my folks know, but they haven’t mentioned anything, at least not yet. I have a couple of friends in the same situation. Their solution is the same as well.”

But for some Iranian women, just the thought of putting aside the chador is akin to stripping. One of those women is Fatemeh, who told Al-Monitor that she doesn’t feel safe or comfortable without her chador. She added that at times, it’s quite convenient. She said, “You could keep your house clothes on. It’s quick and easy; you just slip on your chador and you’re good to go.”

Chadori women support one another. On an Iranian website called "Chadoriha" (The Veiled), the group encourages peer support, pride in wearing the chador, chador-related news and voting for fellow chadori women running for public office.

Though the regime is all for the chador, most people are not. Embarrassment or mockery, or even getting bullied — particularly in bigger cities — are among the consequences of choosing the chador. Homa, a teacher in Tehran, told Al-Monitor that she understands older women’s choice to be veiled, but has absolutely no respect for younger chadoris. She says, “I usually drive carefully when it rains, so the muddy water wouldn’t splash on passersby. But if I see a younger chadori passing, I totally allow myself to be inconsiderate. Let me give you another example: I go to pilates class twice a week and never say hi to the three chadori women in my class.”