In final day before vote, Rouhani lashes out at Iran’s hard-liners 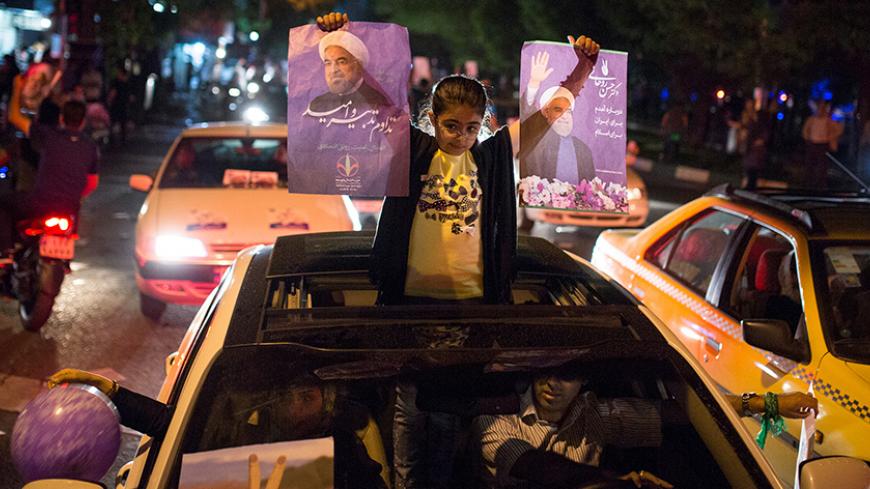 A girl holds posters of Iranian President Hassan Rouhani during a campaign rally in Tehran, May 17, 2017. - TIMA via REUTERS
Arash Karami
@@thekarami
May 18, 2017

With the exception of the third presidential debate in which candidates accused each other of lying and corruption, this year’s Iranian presidential election has been relatively calm in comparison to the last two elections. No one has attempted to disclose secrets about a candidate’s wife, and the country’s longtime nuclear negotiator was not suddenly criticized for his intransigence, breaking a longstanding taboo of not debating foreign policy. But the relative calm of this year’s election changed May 17 when President Hassan Rouhani issued one of his harshest criticisms of the country’s conservative unelected bodies and his main conservative rival.

Without mentioning his name, Rouhani criticized the policies of Ebrahim Raisi, who is the head of Astan-e Quds Razavi, Iran’s largest foundation that is linked to the Imam Reza shrine in Mashhad, the holiest site in Iran for Shiite Muslims. In his criticism, Rouhani also included Raisi’s father-in-law, Ayatollah Ahmad Alamolhoda, who is the Friday prayer leader in Mashhad and who has publicly endorsed his son-in-law. “You want to manage the country?” Rouhani asked of both Alamolhoda and Raisi. “First tell me how did you manage Mashhad?”

Alamolhoda has been the Friday prayer leader of Mashhad since 2007, while Raisi has been the head of Astan-e Quds Razavi since March 2016. These two positions are arguably the two most important positions in the Khorasan Razavi province in northeastern Iran.

Referencing Raisi’s campaign promises to help the poor if he wins the May 19 election, Rouhani also questioned what he has done for them given that a large part of the economy in the province is under Raisi’s control through Astan-e Quds Razavi. “You have all the financial resources, all the institutions of Mashhad. What have you done for the marginalized?” Rouhani asked. He also accused Raisi of using Astan-e Quds Razavi for his campaign.

In addition to the unprecedented attacks on Raisi, Rouhani also used the speech to attack the heads of unelected bodies who are appointed to their positions by Supreme Leader Ayatollah Ali Khamenei. Citing instructions by the founder of the Islamic Republic of Iran, Ayatollah Ruhollah Khomeini, Rouhani asked the Islamic Revolutionary Guard Corps (IRGC) and the Basij to not get involved in party politics and stay in their place. Likely in a direct attack on the IRGC-connected media and business enterprises that sometimes operate as monopolies, Rouhani said, “You want to have cultural institutions and news agencies? You want to have business companies? We’re not opposed, but do not crowd out other people."

Rouhani then turned his attention to the Islamic Republic of Iran Broadcasting (IRIB), the country’s state TV. He said that IRIB was taking government funds while simultaneously attempting to undermine the administration. He accused IRIB of ignoring the administration's achievements during the debates, not asking any questions about the reduction in inflation and self-sufficiency in wheat and gasoline.