After the passing of the head of Astan Quds Razavi, a charitable endowment, Supreme Leader Ayatollah Ali Khamenei must find his replacement. 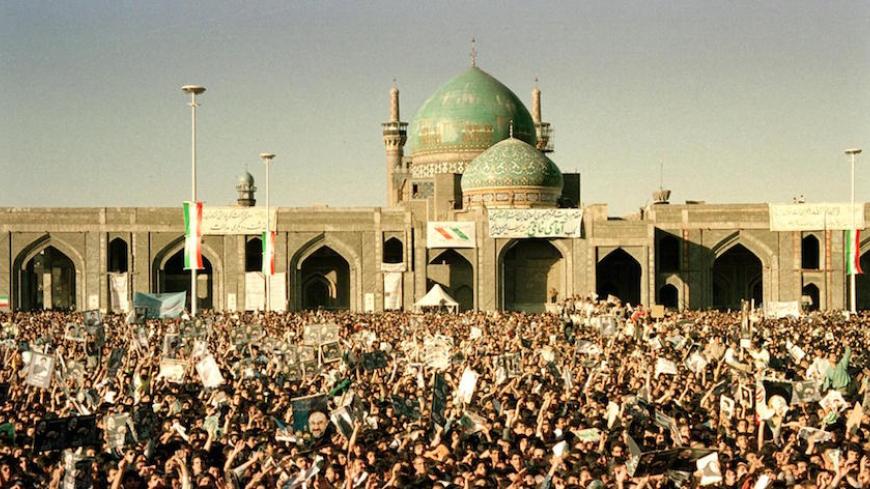 The funeral for Ayatollah Abbas Vaez Tabasi, the former custodian of the shrine of Imam Reza, was held March 5 in the holy city of Mashhad. It was a significant funeral not only because of who attended — Supreme Leader Ayatollah Ali Khamenei, President Hassan Rouhani, parliament Speaker Ali Larijani and the head of the judiciary, Sadegh Larijani, all traveled from the capital, Tehran, to the northeastern city to attend — but it was the end of one of the longest tenures since the founding of the Islamic Republic of Iran.

With the passing of Ayatollah Tabasi there is now a vacancy for being custodian of one of the wealthiest charitable foundations in the country, Astan Quds Razavi; the position will be highly coveted for its religious and material significance.

Born in the city of Mashhad to a religious family, Tabasi entered the seminary at the age of 16 and immediately excelled. According to Tabnak news, he studied under a number of learned clerics, and the leading cleric of Iran at the time, Grand Ayatollah Seyyed Hossein Borujerdi, had recognized Tabasi’s talent.

For his political activities against the government of Mohammad Reza Pahlavi, Tabasi was forbidden from giving sermons and was imprisoned a number of times. After the revolution, the former supreme leader and founder of the Islamic Republic, Ayatollah Ruhollah Khomeini, appointed Tabasi as his representative to Khorasan province and as custodian of Astan Quds Razavi. When Ayatollah Khamenei became supreme leader, he renewed Tabasi's positions.

Astan Quds Razavi is a charitable endowment that oversees the holy shrine of Imam Reza, the eighth Shiite imam, and owns numerous subsidiary institutions, businesses and landholdings throughout the country. There are no specific numbers of the total wealth of the endowment but a 2004 estimate put it at $15 billion. Given that the endowment has steadily grown under Tabasi, this figure is probably larger today. Approximately 17 million Iranians and Shiites around the world visit the shrine of Imam Reza every year, which is also a source of revenue for the endowment.

While Iran has other endowments, none of them have the same “political, religious, financial and geographical status” as Astan Quds Razavi, according to the Asre Iran news website. Ensaf News wrote, “Other than its spiritual position because of the high volume of its economic activity and its political power, it is considered one of the most important components of the [position of the] supreme leader.”

Ensaf reported that due to accusations of a lack of transparency in its economic affairs, the institution has for a long time been a source of rumors about financial impropriety — though the article said that no accusation has ever been proven. Throughout its history there have also been attempts to tax Astan Quds Razavi but because it is a charitable foundation, these attempts have been blocked.

Tabasi held this position for 37 years; no other major institution in the country has been associated with one individual for such a long time, and especially from its inception. Although Tabasi was close to Khamenei, he was also believed to be close in political leanings to the pragmatist Ayatollah Ali Akbar Hashemi Rafsanjani and opposed the policies of hard-line officials. Asre-e Iran wrote that former President Mahmoud Ahmadinejad had attempted to exert influence over Astan Quds Razavi but was blocked by Tabasi.

While a number of names have floated around in the Iranian media as possible successors, according to a number of Iranian websites, Prosecutor General Sayed Ibrahim Raisi is rumored to be named as custodian of Astan Quds Razavi. Raisi, 55, was born in Mashhad and is currently a member of the Assembly of Experts and the conservative Combatant Clergy Association. Seyyed Mehdi Khamoushi, head of the Islamic Propagation Organization, is another name that has been mentioned as taking over Astan Quds Razavi. Hard-line Mashhad prayer leader Ayatollah Ahmad Alamolhoda is rumored to take over as Khamenei’s representative to Khorasan province.

*Update, March 7: Supreme Leader Ayatollah Ali Khamenei appointed General Prosecutor Hojat al-Islam Seyyed Ibrahim Raisi to head Astan Quds Razavi, Iran’s wealthiest endowment. Raisi’s political career began just a few years after the 1979 revolution when he became prosecutor of Karaj. He quickly excelled and former Supreme Leader Ayatollah Ruhollah Khomeini handed him some of the most important cases in the country. Raisi has held important positions such as head of the General Inspections Office and prosecutor general for the Special Court of Clergy. He is also a member of the Assembly of Experts representing South Khorasan province.