Although many Reformists are not likely to be enthusiastic that Ebrahim Raisi has been named as Iran's judiciary chief, some Reformists are welcoming him. 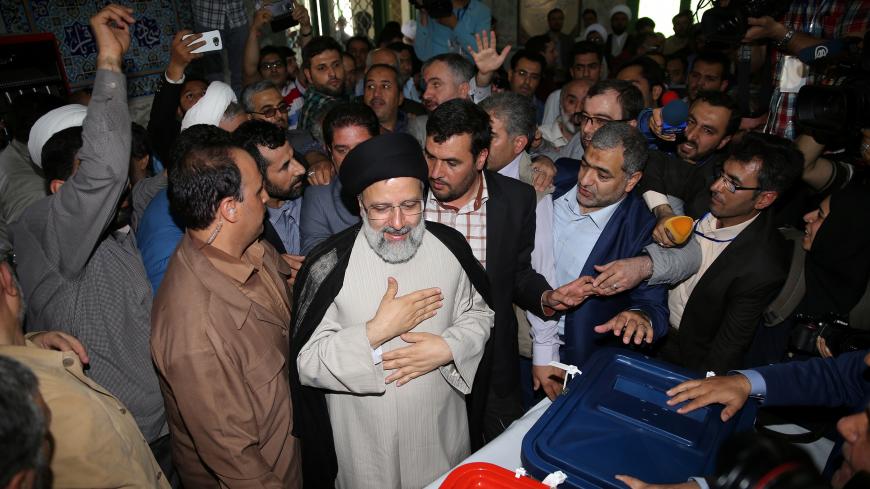 Iranian presidential candidate Ebrahim Raisi gestures as he casts his vote during the presidential election in Tehran, Iran, May 19, 2017. - TIMA via REUTERS

After 10 years as head of one of the most important, and repressive, institutions in the Islamic Republic of Iran, Ayatollah Sadegh Larijani will step down as chief of the judiciary and be replaced by Ebrahim Raisi. Larijani will join other recent government semi-retirees as a member of the Expediency Council, an institution designed to resolve differences between the parliament and the Guardian Council. Raisi will take the helm at a time when his history, concurrent posts and support from Reformists are in question.

Judiciary spokesman Gholam Hussein Mohseni Ejei confirmed Raisi’s appointment March 3 during a press conference. This confirmation that Raisi had been appointed by Supreme Leader Ayatollah Ali Khamenei was followed by comments from Yayha Kamalipour, a member of parliament’s judiciary commission, who said Raisi will take over March 8.

Raisi first entered the national stage in 2016 when Khamenei appointed him as custodian of Astan-e Quds Razavi, one of the wealthiest endowments in Iran, which operates the Imam Reza Shrine and a vast amount of surrounding property in the northeastern city of Mashhad. The previous custodian, Ayatollah Abbas Vaez-Tabasi, had held the position since the 1979 Islamic Revolution until his death in 2016.

Shortly after the appointment as custodian of Astan-e Quds Razavi, Raisi decided to run against President Hassan Rouhani, who was seeking a second term in the 2017 presidential race. Raisi received favorable coverage from conservative media, with some even elevating his clerical position from hojat-al Islam to the more senior ayatollah. Though the conservative candidate lacked charisma and even made political missteps such as seeking the endorsement of popular tattooed Iranian rapper Amir Tattalou, Raisi still garnered nearly 16 million votes to Rouhani’s 23.6 million.

An incident in Raisi’s past came to further light in 2016. The son of the late Grand Ayatollah Hossein Ali Montazeri, Ahmad Montazeri, released an audio file regarding the 1988 mass executions of prisoners. Raisi, a deputy prosecutor in 1988, was implicated as being one of the men responsible for carrying out the execution orders by then-Supreme Leader Ayatollah Ruhollah Khomeini. Hossein Ali Montazeri fell from power in 1988 as a result of his opposition to these killings. In retaliation for releasing the tape, Ahmad Montazeri was sentenced to six years in prison by the Special Court of Clergy, although he was quickly released through the intervention of senior clergy in Qom.

Given his history, it was surprising to see a number of Reformists support his appointment as head of judiciary.

Mostafa Tajzadeh, an Iranian Reformist politician who spent time in prison after the 2009 election, tweeted regarding the previous successions of judiciary chiefs, “Among those who believe that Hashemi Shahroudi [judiciary chief 1999-2009] was able to bring the judiciary back from the ruins of Mohammad Yazdi’s term [as judiciary chief from 1989-99], and that Sadegh Larijani was also able to make it accountable to society’s needs, there is hope that Raisi will bring the judiciary up to date and make it efficient.” He ended the tweet, “Iran needs a judiciary that is independent, unbiased and answerable.”

Reformist member of parliament Mahmoud Sadeghi tweeted, “Many judges of the judiciary are optimistic about the imminent changes in management of the judiciary. Given the history of the likely choice of the next judiciary chief, there is hope that the General Inspection Office will recover its necessary place in fighting corruption.” The Reformist Shargh Daily printed Iranian writer Abbas Maroufi’s recollection of an encounter with Raisi when he was a judge; the article painted the cleric as “handsome” and a fan of the author's work.

For many Reformists who fought Raisi’s 2017 election bid and issued dire warnings about a return of Mahmoud Ahmadinejad-era politics if Raisi were to win, the thought of having him in a position of this much power as judiciary chief is certainly worrying. After all, as attorney general of the Special Court of Clergy, it was Raisi who went after Ahmad Montazeri for releasing the tapes.

But it appears that Reformists, who are struggling to maintain relevance, must now strategically walk back some of their criticisms of Raisi and avoid opening another front, which they certainly would not win and would only lead to their diminished influence in politics and among the electorate.