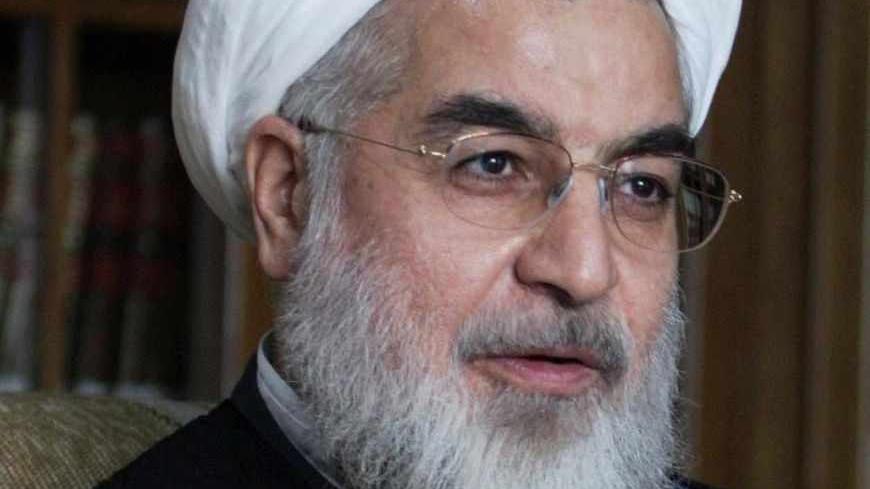 "Hello, Iran, with your face covered in dust,” greeted presidential candidate Hassan Rouhani in a half-hour documentary aired to millions of Iranians on state TV Tuesday night [June 4]. “We are in a cultural, economic and political winter and the weather is unfairly cold,” he said, quoting Persian poet Mehdi Akhavan-Sales.

In the 30 minutes of airtime provided to each of the eight approved candidates for the June 14 election, the little-known Rouhani put up a robust performance, criticizing President Mahmoud Ahmadinejad’s administration and campaigning on broad, but as yet ill-defined, reforms for the country. He pledged his presidency would “end isolation for the Iranian people.”

His high-profile — but behind the scenes — political biography was aired, as were vague allusions to what to expect for his political agenda, under the campaign slogan, “Government of Proficiency and Hope.”

The reformist-leaning cleric comes from the same political stable as centrist ex-President Hashemi Rafsanjani, who was rejected from running in the election on May 21 by Iran’s Guardian Council. Rouhani is considered a long shot for the election, but his campaign has been gaining momentum over the past week and local media suggest he is days away from winning official support of Iran’s reformists, which could mobilize significant numbers of voters for him.

“Ignoring and neglecting a party of a group of society and the freedom-seekers and criticizers in society is not possible,” he said in the documentary, a likely reference to the political marginalization and imprisonment of reformists since the disputed 2009 presidential vote that saw incumbent Mahmoud Ahmadinejad re-elected. “People are asking, ‘Are we supposed to answer everyone in the street? Who are these plain-clothes people?’”

Hassan Rouhani has surprised many Iranians with his aggressive TV interview performances defending his history as nuclear negotiator during the presidency of Mohammad Khatami (1997-2005). He may also be attracting conservative moderates by assuaging the conservative establishment with some revolutionary rhetoric.

Last night’s documentary has propelled his campaign further, leading many in Iran to ask if the reformists might just stand a chance after all. It piqued the interest of several young Iranians watching in Tehran, all of whom said they usually never watch anything on state television.

“I thought he was a lightweight!” said one viewer. “He might struggle as he doesn’t have the connections with the current system like his conservative opponents, but he will be good for Iran in the long term.”

“His record is more interesting than I had thought but he and all the other candidates have not given any detail of their plans if they are elected,” said another.

The majority of Iranians were for the first time made aware of Rouhani’s decorated war record as right-hand-man of the then-substitute commander-in-chief of Iran’s military forces, and his current political ally, Rafsanjani.

“They have left out some people,” came the voiceover by Rouhani over footage of Rafsanjani in a bunker calling in an airstrike on a military radio. “When you think about it, it burns your heart.” This is likely an oblique reference to Rafsanjani’s disqualification from the election race.

The documentary recalled Rouhani’s command of Iran’s air defenses during the infamous “War of the Cities,” which was started when Saddam Hussein launched a systematic strategic long-range bombing campaign on Iranian cities with the assistance of US reconnaissance. The film broadcast footage of former presidents Rafsanjani and Khatami praising Rouhani’s “strategic mind” and his active part in bringing the war to an end in 1988.

After the war, when Rouhani was tasked with establishing Iran’s Security Council, which he later headed as Iran’s lead nuclear negotiator, he faced down calls from conservatives who wanted to fight the US in the first Gulf War. “If that analysis had been taken seriously, we would have been in a very serious war with America,” he explained.

“It’s very beautiful if a centrifuge revolves, but on the condition that the country is revolving as well,” said Rouhani in last night’s documentary. “We do not accept that one factory in Natanz works but hundreds of other factories do not due to sanctions preventing provisions of materials and parts.”

The documentary showed supreme leader Ali Khamenei praising Rouhani personally for his “proficient” handling of the nuclear negotiations with the EU-3 (UK, France and Germany). Rouhani said that Khamenei had told him at the time, “There was not a single night that I have not prayed for you.”

“The nuclear fuel cycle was completed in our time but we were not used to celebration and the stamping of feet,” Rouhani said, referring to bombastic statements by Ahmadinejad on the progress of Iran’s nuclear program. “We were mostly used to standing up for our rights.”

This section of the film was designed to fight back against conservative critics who have derided Rouhani’s negotiations with the West that culminated with the 2003 Sa'dabad Agreement, in which Iran agreed to suspend uranium enrichment completely. Concessions from the West were not reciprocated and Iran restarted its enrichment program under Ahmadinejad in 2005. An EU diplomat at the time was quoted as saying: "We gave them a beautiful box of chocolate that was, however, empty."

A Rouhani speech edited into the documentary showed him saying that although Iran stopped enrichment, it didn’t stop making industrial parts and assembling centrifuges.

On the election front, while one of Rouhani’s conservative election rivals, Saeed Jalili, is campaigning for “resistance” to demands of the 5+1 group (the permanent Security Council members plus Germany), Rouhani seeks improved relations with the West while maintaining Iran’s negotiating position.

The documentary opened with an introduction for Rouhani as “the successor of the old man from Jamaran,” a reference to the Tehran home of Ayatollah Ruhollah Khomeini, which is regularly visited by Iran’s reformists, who retain close connections with Khomeini’s family.

The documentary recalled Rouhani’s early days: meeting Khomeini in 1962; studying in Glasgow, Scotland, as a Ph.D. student; and making rousing speeches in Tehran against Shah Mohammad Reza Pahlavi, which prompted the attention of the shah’s intelligence agency, SAVAK.

A letter by SAVAK discovered after the 1979 revolution singled out Rouhani as a concern. It stated that his speeches attracted large followings and that he was socializing with intellectual revolutionaries such as Ali Shariati and Mehdi Bazargan, the latter of whom would become the first prime minister of the Islamic Republic.

At the moment we are in a sensitive situation because of sensitivity in the region, sensitivity under sanctions and sensitivity because of economic, social and cultural problems,” said Rouhani, suggesting that the blame for these “sensitivities” lay with mismanagement of the Ahmadinejad administration.

The cleric promised “peace and reconciliation with specialists” in Iran, a dig at the perceived shoot-from-the-hip governance during the eight years of Ahmadinejad. This style of leadership was typified when the president closed the offices of the Management and Planning Organization of Iran, a semi-independent body that was the nearest thing Iran had to an independent auditor on economic policy. Following the closure, Ahmadinejad oversaw the loosest fiscal policy in the history of the Islamic Republic.

Rouhani pointed to annual inflation rate of 31% and Iran’s inefficient oil extraction as key issues to remedy, which he again blamed on Ahmadinejad and not the EU and US sanctions on Iran’s financial and banking systems.

“People are asking, ‘Should our youth go to Europe and work in gas stations in order to make a decent life?’”