Iranian media ties the deadly bombing in Manchester to the West’s relationship with Saudi Arabia. 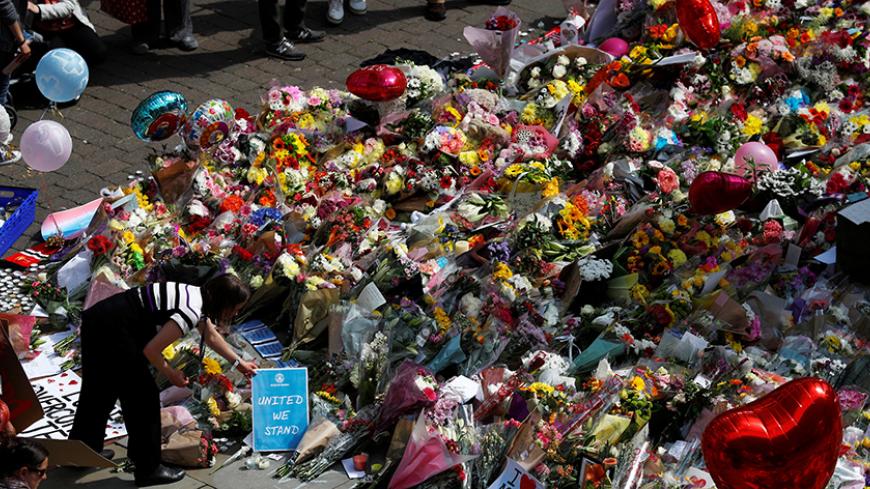 In the hours after the May 22 terrorist bombing in Manchester that claimed at least 22 lives, Iranian media sought to cover developments second by second and published analyses about it.

On May 23, Iranian Foreign Ministry spokesman Bahram Ghassemi said, “We believe that the roots and the ideological origin of the terrorist incidents in Iran’s Mirjaveh and the UK’s Manchester are one and the same,” referring to a recent attack in the southeastern border district of Mirjaveh in which 10 Iranian soldiers were killed by the terrorist group Jaish al-Adl, which is allegedly funded by Saudi Arabia.

Meanwhile, both Reformist and conservative print and online media in Iran notably tied the bombing in Manchester to US President Donald Trump’s recent high-profile trip to Saudi Arabia.

Under the headline “Dancing in Riyadh, the Death Concert in Manchester,” conservative newspaper Javan noted Trump’s visit to Riyadh and his signing of a $110 billion arms deal with Saudi Arabia, writing May 24, “Many of the Western experts have repeatedly warned about the US and Europe’s support for terrorism in the Middle East, and have asked the leaders of these countries to cut their ties with terrorism in Syria and Iraq.” The newspaper added, “The European countries are the main supporters of takfiris in the Middle East, and have ignited the sectarian war in the region through their military aid to these [terrorist groups], but they haven’t been immune from the terrorist attacks, and hundreds of their nationals have been killed or injured.”

Moreover, hard-line Kayhan daily argued May 24, “The United States, France and England have supported the takfiri terrorist groups in West Asia, and have led thousands of families to lose [their children], but these terrorists have now … turned into pythons and are returning to the Western countries, group by group … and the occasional attacks in France, England, Belgium and America are signs of this.”

Of particular note, the US president’s trip to Riyadh appears to have stirred enough anger among usually bitterly divided Iranian media to foment unity in coverage and editorial lines. In this vein, Reformist Etemaad daily — which usually, like other Reformist media, adopts a stance opposed to their conservative rivals — wrote May 24, “Trump’s speech [in Riyadh] and his harsh criticism against Iran was welcomed by Saudi Arabia and its partners, but this should make the Americans concerned.”

Etemaad added, “Pressuring Tehran will allow Trump to at least distance US policies away from Iran symbolically, and will also increase his popularity among [US] Republicans, but this is also dangerous [for the United States] as it will potentially lead to the scrapping of the nuclear agreement with Iran, reduce the intensity of the fight against Daesh [Islamic state] and the US drowning more in the regional clashes in the Middle East.”

Furthermore, referring to the May 19 presidential elections in Iran, Reformist newspaper Aftab-e Yazd wrote, “Trump, [Israeli Prime Minister Benjamin] Netanyahu and Saudi Arabia didn’t think that Hassan Rouhani would be re-elected in Iran’s elections, and they hoped that his [conservative] rival [cleric Ebrahim Raisi] would win, and now they believe that they have lost an opportunity for creating a crisis for Iran. The recent explosion in Manchester once again proved to Trump that it is Saudi Arabia and not Iran that is the terrorist and is spreading war and bloodshed. Therefore, it is in the interest of Trump to return to his [previous] anti-Saudi stances [as during his campaign] instead of visiting Saudi and speaking against Iran.”

In this vein, Iranian Foreign Minister Mohammad Javad Zarif recently questioned whether Trump’s anti-Iranian rhetoric during his regional tour is a genuine policy shift. Zarif posted a tweet May 21, saying, “Iran — fresh from real elections — attacked by @POTUS in that bastion of democracy & moderation. Foreign Policy or simply milking KSA of $480B?”