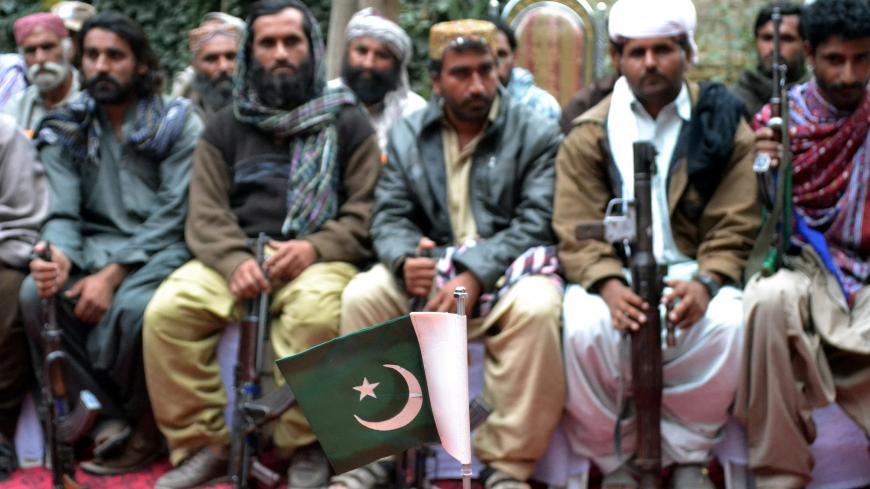 Militants from the Balochistan Liberation Army and United Baloch Army sit before they hand over their weapons to the Chieftain of Marri tribe and Pakistan's provincial minister Nawab Changaiz Marri during a surrender ceremony in Quetta, Pakistan, Oct. 29, 2015. - BANARAS KHAN/AFP/Getty Images

The US State Department’s recent designation of Jaish al-Adl and the Balochistan Liberation Army (BLA) as terrorist organizations calls for a look at the potential international implications of this sudden move.

The Balochistan region of southwestern Asia includes the province of the same name in Pakistan, the province of Sistan and Baluchestan in southeast Iran, and part of southern Afghanistan.

According to the State Department's July 2 official announcement, “The BLA is an armed separatist group that targets security forces and civilians, mainly in ethnic Baloch areas of Pakistan. Additionally, the Department of State has amended the terrorist designations of Jundallah to reflect the group’s new primary name, Jaish al-Adl, and associated aliases.”

Notably, both groups have operated along the Iran-Pakistan border for decades, but follow separate agendas.

More than 90% of Iranians are Shiite Muslims. The majority of Pakistani Muslims are Sunni. While Jaish al-Adl is a Sunni Islam militant organization attacking Iran’s interests, it seems sectarian in nature, as it claims to be fighting discrimination against Sunnis. BLA separatists are challenging the writ of the state of Pakistan and demanding a bigger share in Balochistan’s wealth from natural resources.

Also, both terror groups usually hide on opposite sides of the Pakistan-Iran border. While Jaish al-Adl has been attacking Iranian forces from Pakistani soil and seems to be based there, BLA militants usually escape across the border into Iran after carrying out attacks in Pakistan’s Balochistan province.

However, the main target of both groups is similar, as both attack security forces. Jaish al-Adl abducted Iranian security personnel in October; a few were recovered with Pakistan’s help. Another major attack took place in February when a suicide bombing killed 27 Iranian soldiers. Likewise, the BLA killed 14 Pakistani naval personnel in April in the port town of Ormara.

Now that the United States has designated the groups as terrorist organizations, there may be drawbacks for Pakistan, as Jaish al-Adl continues to attack Iran from its soil. This categorization gives Tehran the higher moral ground, which will increase pressure on Pakistan to take decisive action against the group.

As a norm, Pakistan always faces tensions with Iran whenever the group carries out attacks. In fact, after the one in February when 27 members of Iran’s elite Islamic Revolutionary Guard Corps (IRGC) lost their lives, Pakistan-Iran relations hit a dangerous low. In an unusually stern warning to the Pakistani government, IRGC Commander Mohammad Ali Jafari said, "If Pakistan fails to punish [Jaish al-Adl] in the near future, Iran will do so based on international law and will retaliate against the terrorists.”

Tehran was also tense at that time because the crown prince of its rival, Saudi Arabia, was visiting Pakistan. Iran suspects the Saudis of having ties to Jaish al-Adl. Appearing to refer to the prince’s visit, Jafari said, "The patience that we have practiced in the past toward Saudi Arabia and the UAE [United Arab Emirates], who commit these actions, will change.”

In the past, Jaish al-Adl had claimed to receive donations from a Saudi philanthropist, according to the SITE intelligence and security tracker. Since Pakistan and Saudi Arabia have close bilateral relations, Iran believes these Sunni groups are there with Riyadh’s support. And, since Saudi Arabia and the UAE have extended their presence in Balochistan with massive long-term investments in the Pakistani port of Gwadar, the matter has become worse.

Though no Saudi links to Jaish al-Adl have been proven, schools funded by Riyadh in the region are often considered suspicious, as some of the group’s members had studied there. As Iran and Saudi Arabia are bitter rivals, Pakistan is obliged to maintain a delicate balance in its ties with each. And after the US condemnation of Jaish al-Adl, Pakistan’s Middle East policy will get even more complicated unless it can allay Iran’s concerns.

Nevertheless, Washington’s designation of Jaish al-Adl as a terrorist group has certain benefits for the region. It could possibly be a positive signal from the United States to Iran, which has been under attack by the sectarian outfit for many years. As US-Iranian frictions have grown, the move might even seem — to an optimist — to be a confidence-building measure that could lead to negotiations and a new nuclear deal.

The designation is not only timely, but it also provides the global support and legitimacy required for any crackdown. Pakistan and Iran recently formed a rapid reaction force to secure their common border against both groups, which is an encouraging sign.

Ostensibly, Jaish al-Adl also had the potential to disturb the Afghan peace process. The group could provide recruits to strengthen any Islamic State elements in the Iran-Pakistan border region; the designation should make that more difficult.

Finally, the terrorist label applied to the other group, BLA, will please China as well as Pakistan. These insurgents used to attack only Pakistani forces but recently began attacking Chinese citizens and projects under the China-Pakistan Economic Corridor in a bid to stop foreigners from settling in Balochistan.

Pakistan’s Foreign Office hailed the decision, expressing hopes that the US action will ensure that the “BLA’s space to operate is minimized.” Islamabad had declared BLA a terror organization back in 2006. Moreover, this development is welcomed as it comes just before Pakistani Prime Minister Imran Khan’s meeting with US President Donald Trump, set for July 22 in Washington.