Iran questions US pivot back to region as Europe embraces Rouhani

While the United States is increasingly engaged in a war of words with Iran, the bigger story may be the impact Washington’s more hawkish line may have on Europe’s approach toward Tehran and the consequences of a suggested US pivot back to the Middle East not materializing. 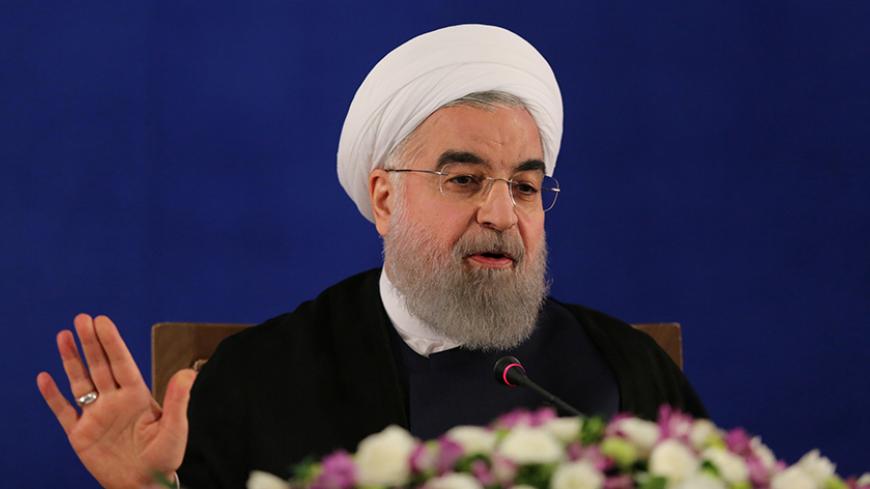 US President Donald Trump’s torrent of controversial remarks on Iran and the Middle East has sparked a variety of reactions in Tehran. In his first speech abroad, delivered from Saudi Arabia on May 21, Trump attacked the Islamic Republic and said he “prayed for the day when the Iranian people would have the just and righteous government they deserve.”

His words came shortly after Iran held its 12th presidential election with a 73% voter turnout. The May 19 election saw President Hassan Rouhani be re-elected with some 57% of ballots. Indeed, voters formed long lines outside polling stations both within Iran and abroad. Turnout was so high in some areas that people were unable to cast their ballots before voting ended, despite having waited in line for hours.

Yet, two days later, Trump said in Saudi Arabia, “From Lebanon to Iraq to Yemen, Iran funds, arms and trains terrorists, militias and other extremist groups that spread destruction and chaos across the region. For decades, Iran has fueled the fires of sectarian conflict and terror.”

Iranian officials did not hesitate to respond. In a tweet on May 21, Foreign Minister Mohammad Javad Zarif wrote, “Iran — fresh from real elections — attacked by @POTUS in that bastion of democracy & moderation. Foreign Policy or simply milking KSA of $480B?” Rouhani also responded one day later during his first press conference following his re-election and said, "The gathering in Saudi Arabia was just a show with no practical or political value of any kind. Saudi Arabia has hosted such gatherings before. You can't solve terrorism just by giving your people's money to a superpower.” He added, “Those who have been fighting terrorism in the Middle East are the peoples of Syria, Iraq and Lebanon. Iran has and will assist these two great nations [Iraq and Syria] and other nations through diplomats and military advisers.”

The Iranian president then rhetorically asked, “Who fought against the terrorists? … Who funded the terrorists?” and then thundered, “Those who fund terrorists cannot claim they are fighting against them. At the same time, I don’t think the American people are willing to trade the many lives that were lost on September 11 with billions of dollars from arms sales.”

Zarif additionally argued in an op-ed for The New York Times on May 26, “What President Trump called ‘lots of beautiful military equipment’ won’t drain the swamps in which terrorism and militancy fester,” adding, “Neither will golden chains or glowing orbs provide a magical solution to the socioeconomic and political challenges that drive radicalization.”

Former Iranian diplomat Fereydoun Majlisi told Al-Monitor, “Trump had promised to fight those who sponsor Daesh [Islamic State], but since his government is a tradesman when it comes to [selecting which] axis [to join], it will exchange anything for money. Previously, he had described [Saudi Arabia] as the perpetrator of the September 11 attacks. Now, after receiving money in exchange for an arms deal, he has forgotten this.”

Washington and Riyadh signed arms deals worth $110 billion on May 20 as Trump was visiting the old US ally. But what do Iranian analysts think of this? Saeed Laylaz, a professor at Tehran’s Shahid Beheshti University, told Al-Monitor, “We have to look at the issue from an earlier time point in history. I think the war in Syria is not strange at all and [in fact] the result of Persian Gulf littoral states generating more revenues through oil. Every time [oil] prices go up, regional countries willingly engage in war. However, today, oil has lost its value — at least for a decade [looking ahead] — and this means the Middle East has lost its value for the US as well. Therefore, Trump’s presence and all the ceremony in Saudi Arabia is solely to sell weapons and make money. It would be foolish to think that the Trump administration is doing anything more than this in the Middle East. All his words in Riyadh were just to please Saudi Arabia and sell more weapons to that country.”

Iranian politicians do not seem to have taken Trump’s remarks too seriously either. Addressing an open session of parliament on May 23, Speaker Ali Larijani accused Saudi Arabia of being a sponsor and exporter of terrorism. Larijani also alluded to the lack of human rights in Saudi Arabia, saying, “Iran is developing democracy in the region by holding elections and polls, while Saudis still prevent women from driving and have no constitution.”

Rouhani said at the May 22 press conference, “We hope the Saudi government will choose the right path and realize that power cannot be obtained through purchasing weapons. The foundation of power is shaped through national strength. It is shaped through elections and the people’s presence [on the political stage]. Mr. Trump came to Saudi Arabia when 45 million people took part in elections in Iran. This is while the Saudi people have never even seen a ballot box.”

Trump repeated his statements about Iran during the second leg of his trip, in Israel on May 22, once again calling Tehran a state sponsor of terrorism. Yet, the Iranians so far appear unfazed about the prospect of Washington pivoting back to the Middle East, reversing former President Barack Obama’s policy of pulling out of the region. Instead, as seen in Zarif’s New York Times op-ed, the Islamic Republic — while criticizing Trump and Saudi Arabia — appears to continue to call for inclusive regional solutions to the region’s problems.

Another impact of the Trump administration’s hawkish tone toward Iran may be that European countries appear to be diverging from Washington in their views of the Islamic Republic and regional developments. On May 20, EU foreign policy chief Federica Mogherini tweeted a message of congratulations to Rouhani for his victory in the election: "I congratulate President @HassanRouhani for strong mandate received … #EU ready to continue work for full JCPOA implementation, bilat engagement, regional peace, and meet expectations of all people in #Iran."

Notably, in a May 21 message to Rouhani, German President Frank-Walter Steinmeier congratulated his Iranian counterpart on his re-election and expressed hope that Iran and Germany will continue their good relations in the future. Similarly, newly elected French President Emmanuel Macron also congratulated Rouhani on May 20 and, while praising the election process in Iran, said France hopes that with the Iranian president’s re-election, the two countries can improve their historic ties.

In the grander scheme of things, the bigger story may thus be the wider consequences of Washington’s adoption of a harsher stance toward Iran, including the possibility of a rupture between the United States and Europe over how to approach Tehran. As such, the consequences of the Trump administration refraining from the pivot back to the Middle East should also be considered.