President Donald Trump’s alignment of US foreign policy with that of Saudi Arabia will only serve to exacerbate tension and confrontation in the Middle East. 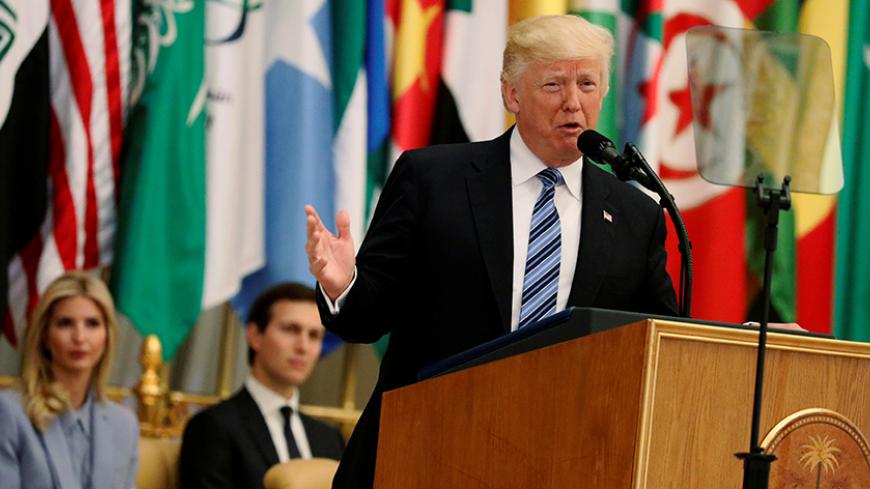 US President Donald Trump’s landmark speech in Saudi Arabia May 21 signals a reversal of policy from the Barack Obama administration and will ratchet up tensions with Iran. A day after a record-breaking 42 million Iranians signaled their desire to engage the world by re-electing President Hassan Rouhani, Trump appeared in an autocratic monarchy to call on “nations of conscience” to “isolate” Iran.

The Trump administration’s main accusation is that Tehran is destabilizing the region. However, this simply does not square with the reality on the ground. Iran is backing the same governments in Iraq and Afghanistan that the United States supports. Meanwhile, Kabul and Baghdad blame Pakistan and Saudi Arabia, respectively, for supporting terrorism in their countries. Former US Vice President Joe Biden acknowledged the role of American allies in fomenting instability, stating in 2014, “They poured hundreds of millions of dollars and tens of thousands of tons of weapons into anyone who would fight against [Syrian President Bashar al-] Assad, except that the people who were being supplied were [Jabhat] al-Nusra, and al-Qaeda, and the extremist elements of jihadis coming from other parts of the world.”

Furthermore, Iran’s military spending is less than Saudi Arabia’s, Israel’s and other Persian Gulf Arab countries’, while its population is greater than all of them combined. To claim Iran has militaristic aims over the region is thus baseless. The historic July 2015 nuclear deal closed all pathways to a nuclear weapon for Iran, whereas Israel remains the only obstacle to a nuclear weapons-free zone in the Middle East.

Given Trump’s apparent strategy, there are at least seven perils the United States could and should avoid.

First, the nuclear deal, which guarantees the non-diversion of Iran’s nuclear program towards possible weaponization, is in great jeopardy. Israel and Saudi Arabia made every effort to prevent the negotiations between Iran and six world powers from succeeding. They have now embarked, as multiple Western sources have confirmed to me, on a subtler strategy of sabotaging the accord. Rather than flagrant US withdrawal from the deal, which would isolate the United States on the global stage, the Saudi and Israeli governments support new far-reaching sanctions on Iran under non-nuclear justifications. This would all but erode the accord’s economic benefits for Iran.

Second, while Obama believed that the United States no longer had a strategic interest in the Middle East’s oil bounty, Trump claims that America has incurred too high a cost for preserving its regional allies and should be paid more in return, describing US Arab allies as having “nothing but money.” A Trump policy of petrodollars in exchange for a confrontational US approach on Iran is thus likely in store. By ignoring the underlying factors that destabilize the region, such a quid pro quo will ensure the continuation of turmoil and its spread beyond.

Third, Trump wants to expand the sale of US armaments to Saudi Arabia and in this vein signed a $110 billion arms deal while in the kingdom. But funneling arms into an already unstable region has long enabled destructive wars, such as the current war in Yemen. It also diminishes prospects for resolving the region’s crises through diplomacy.

Fourth, Trump’s embrace of Saudi Arabia is more likely to spread terrorism than curb it. On the campaign trail, he described Riyadh as the “world’s biggest funder of terrorism.” Now, he refers to US-Saudi ties as a “strategic relationship” and instead accuses Iran of being the “leading state sponsor of terrorism.” This reversal is likely to backfire. Ramping up pressure on Iran will inhibit its ability to combat terrorist groups in Iraq, Syria and other parts of the region. Groups such as the Islamic State (IS), al-Qaeda and Jabhat Fatah al-Sham (formerly Jabhat al-Nusra) share the Saudi Wahhabist state ideology. Supporting Saudi Arabia will boost the spread of such beliefs.

Fifth, instead of recognizing, as Obama did, that Saudi Arabia and Iran should “share” the region and temper the power balance, Trump’s speech in Riyadh sets them up for confrontation. It will only fan the flames of sectarianism and increase tension between Sunnis and Shiites across the region and spread instability.

Sixth, the United States and Israel have long been the most resented nations in the Arab and Muslim worlds. This is why former Iranian President Mahmoud Ahmadinejad’s bellicose anti-American and anti-Israeli rhetoric won him such popularity on the Arab and Muslim street. Today, Saudi Arabia and Israel are forming an open alliance against Iran, which Trump supports. For his part, Israeli Prime Minister Benjamin Netanyahu believes that by aggrandizing the alleged threat that Iran poses to Israel, he can distract from the Palestinian issue. This Arab-Israeli-American alliance also comes at a time when large parts of the Arab world have collapsed and the hope for achieving a Palestinian state has been lost. This alliance will make Arab leaders complicit in Israeli expansionism in the eyes of their peoples, thus boosting recruitment to extremist groups — including IS.

Finally, Trump’s Middle East policy will exacerbate rather than solve the root causes of the problems that afflict Arab states, such as poverty, corruption, autocratic governance and the spread of Wahhabism. This is not to mention the ongoing consequences of the US and NATO military interventions in Afghanistan, Iraq and Libya. Wealthy, stable Arab states have spent enormous amounts buying US weapons and launching military interventions in Yemen, Libya and Syria in part to counter perceived Iranian influence. Instead of using this wealth to alleviate the structural problems ailing their political and economic systems, it is being redirected to destabilize other Arab states. Saudi Arabia alone has seen its foreign reserves decrease from $800 billion to $500 billion in part due to weapons purchases and foreign adventurism. This interventionist trend on the part of wealthy Arab states will likely continue under Trump, intensifying inequality in already unsustainable Arab economies.

None of the above is in the interest of the West. If the region is to find stability and prosper, Trump must rethink his Middle East strategy. He must address the Israeli-Palestinian conflict in a way that respects Palestinian rights and spurs cooperation between the main regional powers of Iran, Saudi Arabia, Turkey and Egypt.