What Obama should say to King Salman during his visit

The inaugural visit of Saudi Arabia's King Salman bin Abdul-Aziz Al Saud to Washington offers US President Barack Obama a unique opportunity to address the long-standing tensions and rivalry between Iran, Iraq and the GCC states. 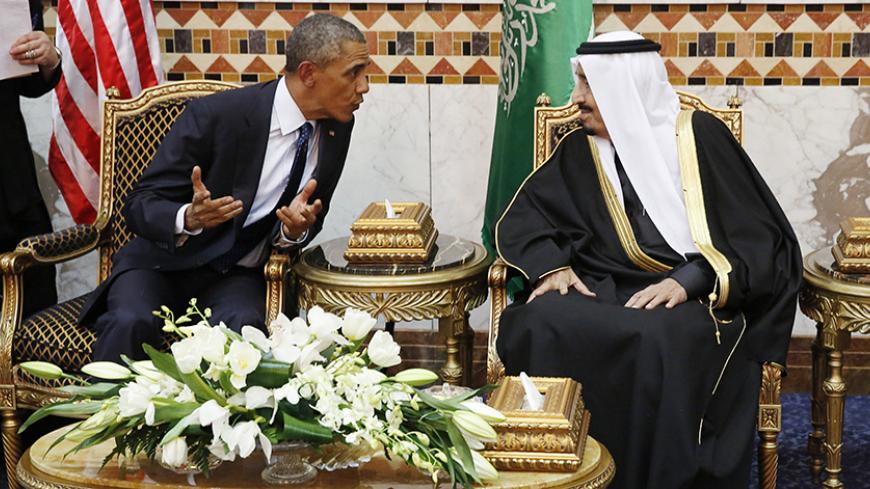 The relationship between Iran and its southern Arab neighbors — namely, the Gulf Cooperation Council (GCC) states — has been turbulent for the past few decades. The GCC states were under the shadow of Iraq and Iran, the two prevailing powers in the Persian Gulf, for much of the 20th century, with the latter historically being the more dominant power. Stricken with internal disputes, weak central governments and rivalries among themselves, the Arab states along the Persian Gulf's southern coast were never in a position to challenge the powers to their north.

The situation changed after Iran’s 1979 Islamic Revolution, which brought political Islam to the geopolitical scene. The autocratic Persian Gulf monarchies immediately felt threatened by this new political force, which had the potential to undermine their legitimacy and jeopardize their rule. Within this context, in 1981 they established the GCC, comprised of Bahrain, Kuwait, Qatar, Oman, Saudi Arabia and the United Arab Emirates. The outbreak of the Iran-Iraq War in 1980 had provided a convenient excuse to exclude Iraq and Yemen, notable omissions even though the latter does not border on the Persian Gulf, and Iraq has close to 40 miles of coastline.

The relationship between Iran and the GCC has been largely confrontational. The GCC’s combined political, military, intelligence and economic infrastructure has often covertly and at times overtly aimed to marginalize Iran. The GCC emphatically supported Iraqi President Saddam Hussein’s 1980 invasion of Iran, providing him with billions of dollars and supporting an “oil war” against Iran, even as his army rained chemical weapons on Iranian as well as Iraqi civilians. More recently, GCC governments have supported the harsh international sanctions regime imposed against Iran and have even publically called for military strikes against Iran’s nuclear facilities, with the United Arab Emirates’ ambassador to the United States, Yousef al-Otaiba, telling The Atlantic’s Jeffrey Goldberg in 2010 that the United States should “absolutely” attack Iran.

For its part, the United States has propped up the GCC with the full gamut of military, political, economic and intelligence support for more than 30 years. These states regularly buy hundreds of billions of dollars’ worth of sophisticated weaponry from the United States, seemingly with little concern in Washington about the complete lack of democracy and the endemic prevalence of human rights abuses and corruption in all these states.

Nevertheless, this approach of seeking to pressure and isolate Iran has had the opposite of its intended effect. After 36 years, Iran is now one of the most powerful and stable countries in the Middle East, with vast regional influence and credibility. At the same time, the United States' main Arab allies have proven to be unsustainable and vulnerable. This innate fragility was evident in the GCC states during the Arab Spring, which saw a popular uprising in Bahrain violently suppressed by Saudi Arabia and unrest in other GCC countries.

Today, the world is witnessing a new and unprecedented threat emanating from the Middle East — terrorist organizations such as the Islamic State (IS), al-Qaeda and Jabhat al-Nusra. These groups indisputably rank as the No. 1 regional and global security threat. IS, by controlling the four key elements of land, money, oil and weapons, is arguably the most dangerous terrorist organization in modern times. In confronting these groups, the world should be cognizant of their main ideological, military and financial backers, which for the most part are based in the GCC states.

The United States is caught in a bind in the Middle East and understandably would like to wash its hands of the region’s numerous conflicts. Recent developments have allowed it to pursue a lessening of its footprint in the region, with the advent of shale oil reserves playing an important role. This new source of hydrocarbon positions the United States to soon become the top producer of oil and gas in the world, decreasing its dependence on Middle Eastern oil and its need to control energy resources in the region. The United States is thus poised to alter its approach to the region and gradually reduce its stake in the conflicts and crises there.

The GCC has also found itself in a quandary. Iran’s ascendance in the region, despite all the GCC’s efforts to curtail it, has led the bloc to pursue more erratic and risky policies. Nowhere is this more evident than in Yemen, where a Saudi-led coalition of mostly Arab states has found itself entangled in an open-ended conflict. If the GCC continues on its current trajectory — lacking in reform and involving aggressive intervention in the region — the durability of the council itself will arguably be threatened. The union could collapse altogether.

An alternative path does, however, exist for constructive engagement between the GCC and Iran. It is sensible for the GCC to be fearful of its northern neighbor, which is large and powerful and has a population some 30 million people greater than the GCC states combined. Thus, it is necessary for Iran to take steps to ease the GCC’s legitimate security concerns in this regard.

In open and friendly meetings, the GCC and Iran as well as Iraq should explicitly put all their concerns about one another out into the open and work to resolve their differences through the establishment of a regional system that emphasizes political, security, economic and military cooperation. Such an arrangement would be a long-term solution to the rivalry between Iran, Iraq and the GCC. It would also fill the vacuum created by the United States’ exit from the region.

US President Barack Obama would be wise to discuss the creation of such a regional security system with King Salman bin Abdul-Aziz Al Saud during the Saudi monarch’s visit to Washington Sept. 4. Indeed, the holy city of Mecca would be the ideal place to suggest for Iran, Iraq and the GCC to hold a summit to discuss this proposal.