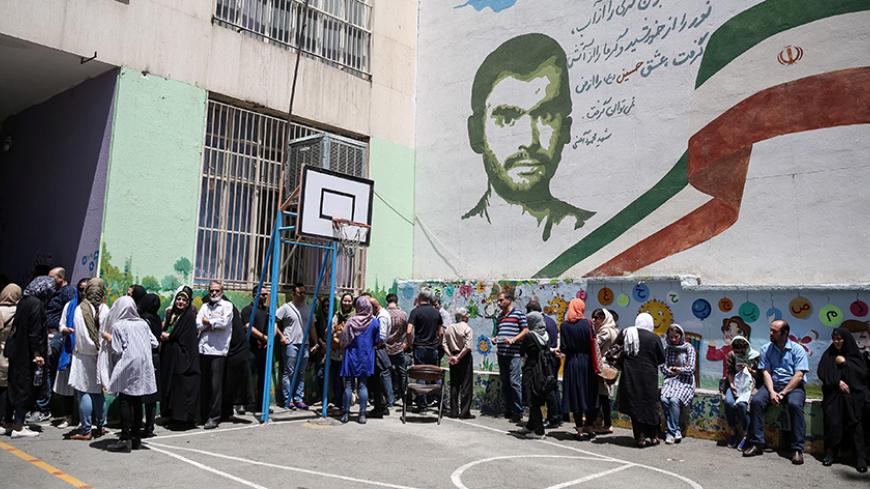 Voters stand in line to cast ballots during the presidential election in a Jewish and Christian district in the center of Tehran, Iran, May 19, 2017. - TIMA via REUTERS

TEHRAN — President Hassan Rouhani won a second term in the May 19 presidential election with 57% of the vote. The polarization of the Iranian electorate led to a strong turnout of 73%, with some 41 million casting ballots. Rouhani, a Reformist, defeated hard-line rival Ebrahim Raisi, who had the backing of conservatives. The strong presence of pro-reform citizens and "gray voters" was key to the incumbent’s victory.

In the Iranian political lexicon, gray voters are those who usually don’t vote but are swing voters whenever they do participate in elections — such as in 2013 when Rouhani was first elected. The president has been representing both moderates and Reformist groups since 2013 after Reformists were marginalized over the disputed 2009 elections.

Raisi, who had reached out to low-income households with tempting promises of higher monthly cash subsidy payments, managed to fetch 15.7 million votes even though he is new to presidential races. Parviz Kazemi — a Cabinet member in the government of former President Mahmoud Ahmadinejad (2005-13) — had predicted that only 9 million to 10 million voters might be loyal to the conservative candidate, the Tadbir Khabar website reported April 28. Official data show that nearly 14 million people did not vote, leaving about 31 million voters categorized as loyal to moderates and Reformists or as gray voters. Nearly 6 million of the gray voters seemingly turned right toward the conservative hopeful.

This indicates that Raisi’s social base is now strong enough to oppose many of the policies of the elected president. His success in snaring so many votes in a short period of time is largely attributed to the verbal support he received from Supreme Leader Ayatollah Ali Khamenei. However, it should also be noted that many non-conservative citizens will vote for a candidate the supreme leader dislikes. Previous elections show that millions of gray voters, who normally do not vote for a variety of reasons, may turn out if they feel a certain candidate backed by Khamenei might be elected president.

Khamenei has never voiced explicit support for any candidate. However, media outlets that were faithful to Rouhani indicated that Raisi and Khamenei share many ideological stances. For instance, they both had identical approaches toward cultural affairs and also foreign policy, where Rouhani has tried to adopt a moderate stance. Thus, one key question is why Khamenei would have implicitly supported his favored candidate knowing that his backing could hurt Raisi.

The answer is that Khamenei views a high turnout as more important than the election of any one candidate, including Raisi — a judiciary official who had no experience in government. Indeed, Khamenei is now in a win-win situation, as the high turnout could suggest that the social popularity of the Islamic Republic is still high decades after the 1979 Islamic Revolution. On the other hand, his seeming support for Raisi helped the conservative candidate form a strong opposition backed by 38% of voters.

Moreover, the conservatives — who had failed to reach consensus on a single presidential candidate in past elections — have found a person who is potentially able to lead a far stronger opposition. The significance of an integrated conservative opposition is better understood when considering that Reformists and moderates already control a majority of seats in parliament. It also should be noted that Reformists swept the city and village council elections, which were held concurrently with the May 19 presidential vote. They gained control of local councils in Tehran and many other major cities, ending longstanding conservative dominance of local politics.

After the release of the results of the presidential elections on May 20, Khamenei hailed in a written message the high turnout as a clear sign that “Islamic democracy” has strong roots in the country and citizens are deeply interested in “this great gift of the Lord.” Notably, there was no mention of direct congratulations to Rouhani. Instead, Khamenei urged the next administration to take care of Iranian households who are most vulnerable to economic woes.

Though a majority of those who voted for Raisi have a conservative slant, it can be assumed that many were also attracted by his promises of vastly expanded monthly cash subsidy payments. Indeed, this year’s elections proved that the populist rhetoric still has supporters among Iranian voters — an issue that could turn into Rouhani’s Achilles' heel in coming years.

Rouhani has major differences with ultraconservatives on a wide range of issues ranging from foreign policy and cultural affairs to human rights and the economy. But the key point, as Khamenei mentioned in his May 20 message, is the economy. Should the president manage to further ease ties with the West, more expertise and more resources will be arriving in the country, reviving the Iranian economy.

Some analysts argue that the Rouhani victory will give him a mandate to push through domestic reforms and pursue talks with the United States and major European countries, but the tone of Khamenei’s message and the formation of a stronger conservative opposition indicate that Rouhani will be facing more serious challenges than ever.

Rouhani vowed during campaigning that he will be doing his best to remove remaining US sanctions against Iran should Khamenei support him — a prerequisite that needs to be fulfilled before anything else. This promise seems too good to be true, as it not only needs Iran to reshape its foreign policy but also requires Tehran to comply with international human rights standards. In this vein, it should not be forgotten that the European Union recently extended until April 2018 sanctions against Iran over "serious human rights violations," with Rouhani failing to take any action over the move.