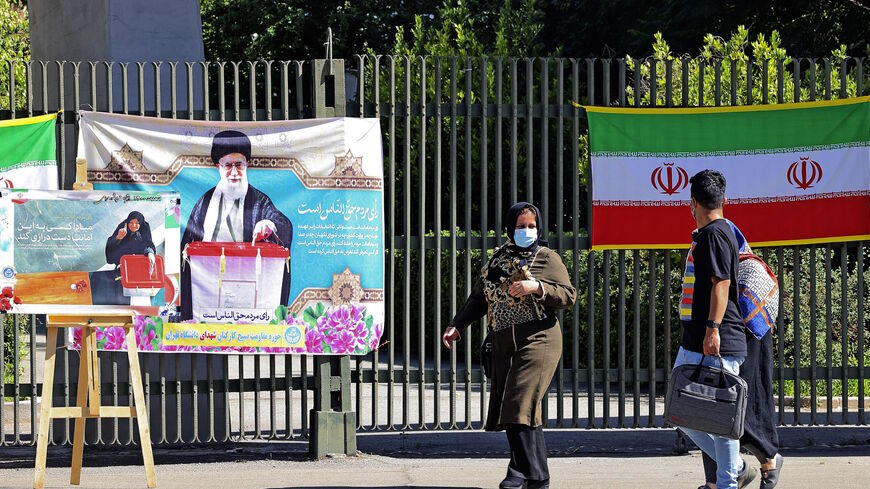 Iranians walk past banners encouraging people to vote at Tehran University in the eponymous capital, on June 14, 2021, ahead of the June 18 presidential elections. - ATTA KENARE/AFP via Getty Images

Polls have repeatedly shown that this year’s election will likely see the lowest voter turnout in recent history. One of the reasons for the low voter turnout is the high number of disqualifications that have left a small number of candidates to run. Another problem has been the economic crisis the country is suffering despite the fact that many Iranians voted in 2013 and 2017 for a candidate who promised to improve the economy through negotiations with the United States on the nuclear file.

Khamenei conceded that there are legitimate economic grievances, particularly on issues of housing and related issues. Addressing the Hassan Rouhani administration indirectly, Khamenei said they could have done a better job of addressing these economic problems. However, Khamenei argued that “sulking” and not voting will not solve the economic problems of the country. He encouraged Iranians to vote and use their vote on a candidate they believe will address these legitimate economic grievances.

With two days left, three candidates have stepped aside. Mohsen Mehralizadeh, one of the two moderate candidates approved by the Guardian Council, announced today he would be stepping aside. In his statement, which hard-line website Mashregh described as “rushed,” Mehralizadeh did not throw his support behind Aboldnaser Hemmati, the other moderate candidate in the election. Neither the candidate nor his staff have given the reasons for his sudden announcement and for not supporting Hemmati.

Alireza Zakani, one of the five conservative candidates approved to run, withdrew as well. Unlike Mehralizadeh, Zakani threw his full support behind front-runner and current judiciary chief Ebrahim Raisi. Zakani told reporters that, given Raisi’s popularity, he views him as the most qualified candidate to bring about structural changes and will be voting for him. Conservative candidate Saeed Jalili also announced he would be withdrawing and would support Raisi. Conservative candidate Mohsen Rezaei said he would not step aside.

Raisi, who is leading in the polls and who many believe has had the entire election process engineered for his election victory, continues to pick up support. Two hundred and ten parliamentarians signed an open letter asking the remaining two conservative candidates to step aside in favor of Raisi. The letter read that given Raisi’s popularity and the need to have a strong and united government, the time was ripe for them to act now and give their support to Raisi.

Reformists have been unable to unite to support an individual candidate. Many have been calling on them to make an announcement, but disagreements have prevented that from happening. It is believed that the various Reformist groups have differences of opinion on how to approach the election given that they do not have an official candidate who was approved to run. While the Reformist groups cannot make a decision, a number of Reformist editors of the major newspapers held a meeting with Raisi, causing a small controversy. The editors took a picture with Raisi and made positive comments about him, causing the ire of some on social media.