Incoming Iranian president Ebrahim Raisi is widely discussed as Supreme Leader Ali Khamenei’s successor, but there may be rumblings of a power struggle in the conservative camp. 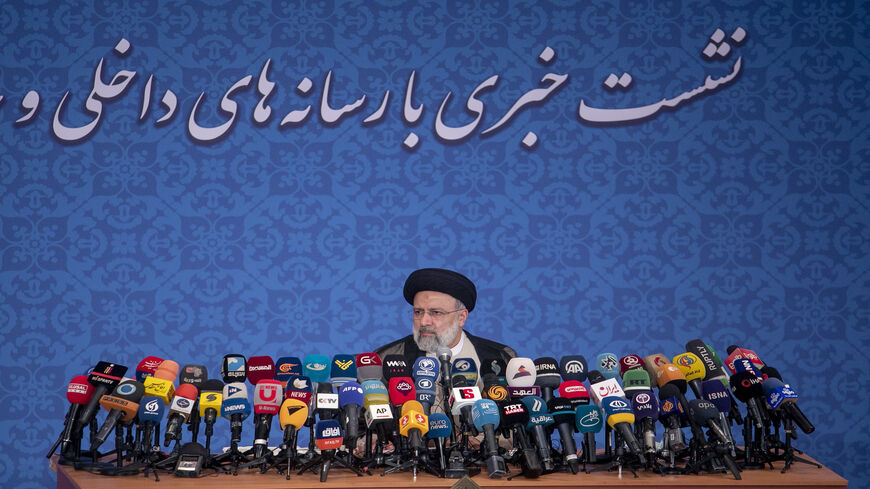 Two days after the Iranian presidential election June 20, Vahid Haqqanian, a senior official in the supreme leader's office, provided his analysis of the election process in a public memo.

Known as the supreme leader’s right-hand man, Haqqanian argued that the decision of Mohsen Rezaei, Amir Hossein Ghazizadeh Hashemi and Abdolnasser Hemmati to stay in the presidential elections until the end proved that the enemies' arguments saying these candidates were back-up candidates for Ebrahim Raisi proved to be wrong.

Haqqanian, who is the deputy for special affairs at the supreme leader's office, also admitted in his controversial memo that boycotting the election campaign, widespread disqualifications of rival candidates and Mahmoud Ahmadinejad's call for boycotting the elections posed a serious challenge to the Islamic Republic.

He also highlighted that Rezaei and Ghazizadeh Hashemi, despite the attempts by "a certain perspective," remained in the elections until the end and did a great service to the Islamic Republic by not quitting.

He clearly meant hard-liners such as Hossein Shariatmadari, editor-in-chief of the hard-liners Kayhan daily. Shariatmadari was appointed to the post by Supreme Leader Ayatollah Ali Khamenei, who would call on other Principlist candidates to take the risk of the Reformist contender Hemmati's victory seriously and asked them to drop out of the elections in favor of Raisi.

The irony is that Haqqanian’s sarcastic comments addressed Shariatmadari while both are from the same political camp and are appointed by the supreme leader and are close to him. Such comments were rather a weird and unprecedented event in Iran’s politics.

Haqqanian is known as a behind-the-scenes figure in Iran's political equations. He rarely writes to the media. His remarks also sparked huge skepticism among those who supported the Reformist Hemmati.

"Therefore, the presence of Hemmati and other rivals was a divine help for Mr. Raisi, and it must be said that they for better or worse served the revolution," Haqqanian wrote in his note.

In fact, with these statements, Haqqanian confirmed that the Islamic Republic was worried about the people’s nonparticipation in the elections.

Shortly after his note was published, Tasnim News Agency reacted strongly to it warning Haqqanian to change his approach. The media outlet that is affiliated with the Islamic Revolutionary Guard Corps (IRGC) sharply criticized the official at the supreme leader’s office for writing the note in an article titled, "Mr. Haqqanian, quit that detrimental move."

The news agency warned Haqqanian that as long as he holds an official position in the supreme leader’s office, he has no right to make such statements and speak to the media. It argued that his comments could be taken as from the supreme leader himself and reflect on the office.

These arguments are just a small part of a bigger conflict over the power struggle in Iran. Given that Khamenei is now 82 years old, many political observers believe that Raisi’s victory in the June 18 presidential elections was in fact a preliminary step in preparing him to become the next supreme leader.

However, Raisi is not the only choice of the hard-liners, and not all hard-liner groups support him in his rise to power as the next supreme leader.

“Mr. Raisi is not a very smart politician, and there is a common belief among Iran's political elites that groups that back him can easily bring him under their control," one Principlist political commentator told Al-monitor.

This political figure, who wanted to remain anonymous, said, "This capability of being controlled is the most important reason why the majority of political groups close to the IRGC — as well as individuals within the supreme leader's office — have decided to back Raisi."

Nevertheless, there is no consensus among political groups over the next supreme leader and there is an ongoing conflict over the succession to Khamenei. Although Raisi is currently in a better position than other potential candidates, political groups that are concerned about him being controlled by others are seeking to turn the presidency into an opportunity to remove him from the list of potential successors.

Raisi is assuming presidency at a time when the pressures from sanctions, economic problems and an incompetent government are at their peaks, and the level of discontent among the public with the Islamic Republic is higher than ever. Under such circumstances, with Iran having witnessed two rounds of nationwide protests over the past four years, public anger may flare up again. In that case, some believe the possible incompetency of Raisi may cause him to be removed from the list of potential candidates for the next supreme leader.

"Although the intra-group power conflict has even reached the office of the supreme leader, I think the recent election shows that the majority of the Principlist political current supports Ebrahim Raisi," a journalist close to the hard-line political movement in Iran told Al-Monitor on condition of anonymity.

Needless to say that with outgoing Hassan Rouhani, the rival moderate and Reformist camp will be throwing off the power circles in the Islamic Republic, which in turn would pave the way for the formation of a unified government. Former IRGC commander Mohammad Bagher Ghalibaf presides over the parliament, while the next head of the judiciary replacing Raisi would be appointed by the supreme leader. In that case, it is natural that the power struggle would be from inside rather than outside.

Haqqanian's note of sarcasm against his fellow Principlists that demanded the resignation of other candidates in favor of Raisi shows that the power struggle has spilled over to the supreme leader’s office — a conflict that will escalate in the coming months and years as Khamenei ages. This intra-hard-liner conflict will become even more apparent as President-elect Raisi assumes office in August.