After preparing everything to guarantee a victory for its preferred candidate, the ruling establishment is now attempting to draw the largely apathetic electorate to the ballot box. 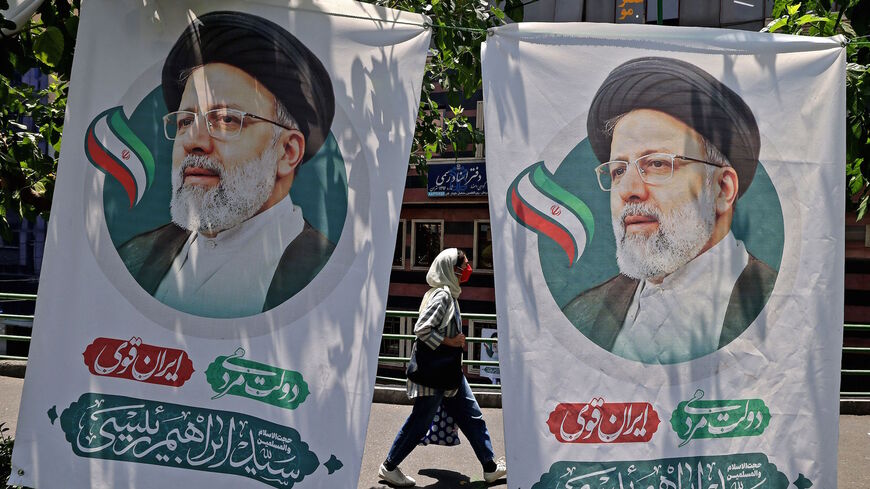 An Iranian woman walks past banners of ultraconservative cleric and presidential candidate Ebrahim Raisi, in Tehran, on June 17, 2021, on the eve of the Islamic Republic's presidential election. - ATTA KENARE/AFP via Getty Images

Iran's hard-line leadership has in the past few days gone to great lengths to push the public toward the ballot box in Friday's presidential election to decide the "fate" of the country at "this critical juncture."

The competition, however, is seen as nothing short of an "engineered" race meant to guarantee a landslide for Ebrahim Raisi, the judiciary chief close to Supreme Leader Ayatollah Ali Khamenei.

In his address to Iranians ahead of the vote, Khamenei urged a maximum turnout, saying the nation's "grievances and complaints" should not prompt a boycott. Any such decision, he said, is "wrong." He also accused foreign-based opposition media of conducting propaganda aimed at "discouraging" voters. The Iranian leader refused to address the pre-election purge of centrist and Reformist nominees at the hands of the unelected supervisory body, the Guardian Council, which only reports to him.

Similarly, President Hassan Rouhani, despite being vocal about the Guardian Council's approach, also called on Iranians to fulfill their "national duty" and "heat up" the election mood. In an allusion to the arrangements made by the hard-line body, Rouhani said, "Mistakes by a certain group" should not make them skip the balloting. Even some leaders of the Reformist movement have appealed to the nation to come out for the sake of "Iran" and to protect the "republic."

Two candidates rising from the conservative camp have already left the race after endorsing Raisi, who will have an easy competition with two other conservative figures, Mohsen Rezaei and Amir-Hossein Ghazizadeh Hashemi, as well as Abdolnaser Hemmati, the only moderate candidate left in the campaign. During three televised debates, Hemmati repeatedly predicted a withdrawal of the hard-line candidates, who were believed to play "cover and backup" for a less articulate Raisi.

Campaigning was officially closed early Thursday, 24 hours before polls were to be opened across the country for some 59 million eligible voters. Arrangements have also been made for the Iranian diaspora with 235 ballot boxes worldwide, even in the United States. But Foreign Minister Mohammad Javad Zarif has criticized the Canadian government for refusing to allow the voting setup.

For all the pre-election hustle and bustle, polling conducted by various centers has painted a disappointing picture for the ruling establishment. The highest estimate is 47%, down from 71% in the previous election.

Months ahead of the vote, many Iranians have been promoting a boycott. "No way I will vote" has been a fast trending hashtag on Persian social media, where supporters of the campaign argue that under the Islamic Republic, voting has proven a "travesty" of democracy.

Different dissident groups have also come up with their own calls on the public to send a message to the system by refusing to vote. On June 15, over 100 Iran-based activists issued a statement to pledge allegiance to the Iranian public and "cry out loud their big NO against lies and corruption."