In the face of an embarrassing record number of invalid votes cast in the latest elections, Iran's leadership continues to either look the other way or scramble for a justification. 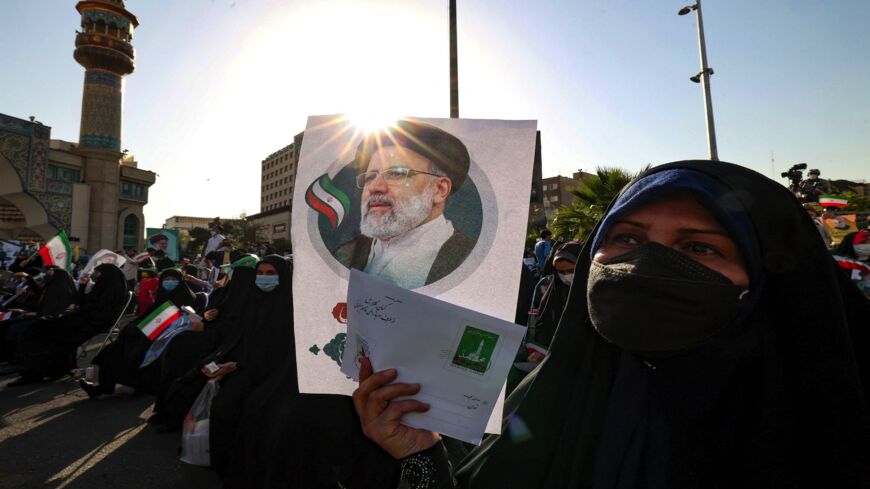 Supporters of Iranian ultraconservative presidential candidate Ebrahim Raisi carry a poster bearing his picture as they attend a rally in the capital, Tehran, on June 16, 2021, ahead of the Islamic Republic's June 18 presidential election. - ATTA KENARE/AFP via Getty Images

The June 18 vote in Iran was more than unique in many ways when compared to previous polls held after the 1979 Iranian Revolution. It told the tale deep from inside Iran's politics and the widening state-nation gaps, perhaps more vividly than ever before.

Weeks ahead of the elections, apathy was already floating in the air. Accumulated economic and political grievances of a disgruntled Iranian society had left it few, if any, hopes to cling to in the ballot box.

And add to that a purge of centrist figures, who could have mobilized at least some sections of the so-called grey or undecided electorate. Yet the ruling establishment chose to keep those voters out of the game. The unelected supervisory body, the Guardian Council, dominated by ultraconservative clerics handpicked by Supreme Leader Ayatollah Ali Khamenei, acted with no mercy, even toward longtime loyalists. The policy was all but a sign of a shrinking inner circle that has been kicking out the "others." It was an attempt by the hard-liners to homogenize a tribe of their own.

Against such a backdrop, allegations of fixing became the election's dominant debate. The state was seen as more than determined to guarantee a landslide for its own candidate well in advance. Ebrahim Raisi, the supreme leader's blue-eyed boy, was ultimately left competing almost with himself or, at best, with three uncharismatic candidates. The results were, thus, everything but a surprise. Raisi grabbed 62% of the votes, as Iran marked its lowest ever turnout in a presidential election.

Nonetheless, there was still some element of surprise when the vote breakdown was officially announced. Invalid votes came second, beating Raisi's three rivals and sweeping some 13% of the total ballots. According to government data, invalid votes had made up only an average 2.2% of the total votes in previous elections.

But the biggest embarrassment came from the city council elections, which were held simultaneously with the presidential race nationwide. In at least three large cities — Karaj, Hamedan and Arak — invalid votes were atop all candidates, who had been campaigning with all in their power with unrealistic and populistic economic promises as well as appeals to religious and national heroes.

The Islamic Republic has for decades banked on election turnouts as a moment of "renewal of public allegiance with the revolution and the establishment," and a referendum on its legitimacy. Long queues broadcast on state TV during election days have traditionally been commonplace scenes that have served as "a punch in the face" of the "global arrogance," a term used in the ideological literature of the Iranian leadership in reference to Israel, the United States and much of the Western world.

To ward off the embarrassment from the low turnout on June 18, the hard-liners came out with multiple explanations, dismissing arguments about a crisis of legitimacy and the slipping public faith. They did instead blame the coronavirus pandemic, boycott campaigns and the Western "propaganda" that in their view had scared many potential voters away.

Although the ruling establishment was more or less prepared for a low turnout — largely of its own making — the invalid votes caught it off guard. Those ballots were too many to be simply ignored. "The spoiled votes could be worth studying as a university course," admitted government spokesman Ali Rabiei.

It took the supreme leader more than two weeks to publicly address the matter, albeit in his own style. Khamenei argued that such votes did not make the elections less of an "epic." While observers were busy analyzing how those ballots served as "protest votes," to Khamenei, they sent a different signal.

"The issue of invalid votes is by no means an indication of divorce from the Islamic Republic. It is, indeed, the other way round, because someone who goes to the ballot box and [even though] finds no qualified candidate on the list has shown their support [anyway] for the voting process and the Islamic Republic," he declared.

The statement, however, struck a clear contrast with his earlier positions. In a 2001 speech attacking Western democracies, Khamenei called it a "disgrace" for the governments, which have recorded 35% to 40% turnouts in their presidential polls. Also, in response to queries on his website regarding blank votes in the run-up to this year's elections, Khamenei ruled such votes as "Haram," or religiously forbidden, "if they are to weaken the Islamic establishment."

To the Nobel laureate and human rights advocate Shirin Ebadi, the contrast was a sign of Khamenei's desperation. "He has now resorted even to invalid and Haram votes as a proof of his legitimacy," the exiled activist wrote on her Telegram channel.

Corroborating Khamenei's justification, ultraconservative outlets pushed his line to yet an upper level. "Even those who cast invalid ballots contributed to the epic," read an editorial in Sobh-e- Sadegh, a weekly run by the political bureau of the Islamic Revolutionary Guard Corps (IRGC).

With Raisi's win, the administration is falling to the hard-liners, the only trench they had to control for a uniform rule. "The results of the polls led to a homogenous system of governance that the country has to keep for 10 years to come," said Amir-Hossein Ghazizadeh Hashemi, a hard-line candidate who placed last in the race. The statement has been interpreted as another open expression that the election was arranged in a way to secure the best of political gains for the ultraconservatives.

Facing his twilight years, Khamenei on the other hand is also attempting to cautiously outline his new vision for Iran's political future. "A time may come in the future when elections could render pointless, and other forms of participation may emerge for the public, through which to express their opinion," he said in a speech before the elections.

While he has not yet elaborated on what that system may look like, the immediate message has been clear: preparation for a new system that would gradually do away with public engagement and further diminishes chances of pluralism in Iran's power play, one that could see the conventional, Western-style elections abolished for good.

Hassan Abbasi, an ideologue and "strategist" close to the IRGC, has been perhaps more than explicit on such exclusion of the public. "By embracing the Western model of democracy of elections, we made a mistake. There is no election in the UAE, nor in Qatar and Turkmenistan. But people in those countries have less of a headache, don’t they?"