Despite the Principlist JAMNA coalition holding a preliminary vote to find a consensus candidate, Iranian conservatives remain divided a month before the country’s presidential elections. 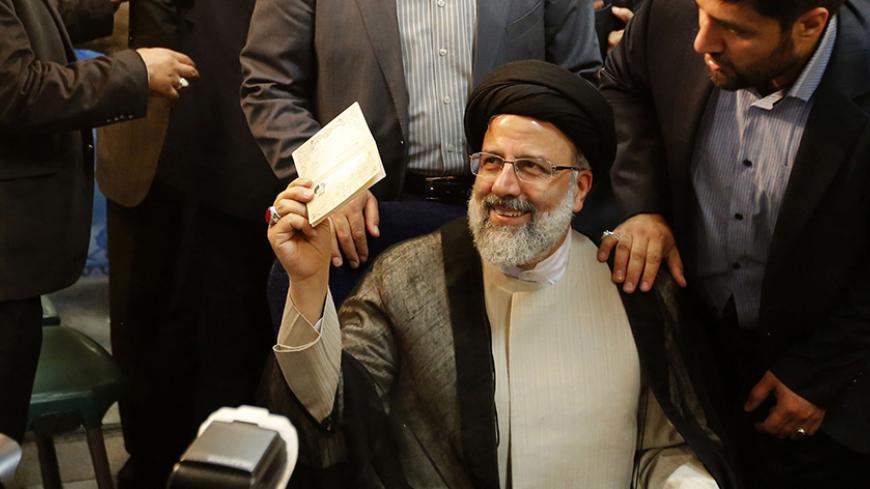 Iranian cleric Ebrahim Raisi gestures after registering his candidacy for upcoming presidential elections, at the Interior Ministry in Tehran, April 14, 2017.

In a new development this election cycle, the Principlist movement formed the Popular Front of Islamic Revolution Forces, popularly known by its Persian acronym, JAMNA, and adopted a candidate selection mechanism akin to the primaries held by Western political parties. The coalition, which includes top conservative figures, hopes to forge agreement on a consensus candidate to run against incumbent President Hassan Rouhani.

In balloting on April 6, JAMNA selected five men as prospective presidential nominees. A unity candidate will later be selected from among the five. All other potential Principlist contenders withdrew their candidacies after the primary.

Among those who stepped aside were Ezzatollah Zarghami, former head of Iran’s state broadcaster. He came in eighth place in the JAMNA primary but had announced his intention to run for the presidency March 15. Also stepping aside were former Islamic Revolutionary Guard Corps commander Mohsen Rezaei, who came in 10th place, and former nuclear negotiator Saeed Jalili, who had from the beginning rejected the very idea of JAMNA. Jalili announced his withdrawal through a statement shortly after the April 15 deadline for candidate registration had passed, and chose not to declare his support for any Principlist candidate.

The five JAMNA finalists include Ebrahim Raisi, who as leader of the Asran-e Quds Razavi charity is the custodian of the holy shrine of the eighth Shiite imam. The conservative cleric, who is viewed as Rouhani’s main competitor, issued a statement April 9 announcing that he would be entering the fray “independent of political groupings.” Although this prompted skepticism about his adherence to JAMNA principles, the coalition issued a statement April 10 to the effect that Raisi’s comments were in full accordance with its founding statute. Raisi subsequently registered as a candidate at the Interior Ministry on April 14.

JAMNA finalist Alireza Zakani, a former lawmaker, also registered as a presidential candidate April 14. Of note, he had sought to run in the 2013 elections, but was disqualified by the Guardian Council, the body tasked with vetting candidates. The former parliamentarian tried his luck again in the February 2016 parliamentary elections, but came in 38th in the Tehran district, which had 30 seats to fill. Hamid Reza Haji Babaei, who served as education minister under President Mahmoud Ahmadinejad, is also a JAMNA finalist and registered to run April 15.

Long-time Tehran Mayor Mohammad Bagher Ghalibaf, who unsuccessfully ran for the presidency in 2005 and 2013, made JAMNA's list of five and registered as a candidate April 16. Former parliamentarian Mehrdad Bazrpash rounded out the five JAMNA finalists. Only 36 years old, Bazrpash had quickly climbed the ranks under Ahmadinejad, and although criticized for being unqualified, was appointed CEO of two of Iran’s largest automakers, Pars Khodro and SAIPA, in March 2007 and January 2008, respectively.

Bazrpash's presence on the list of JAMNA finalists surprised many political observers, especially given his lack of experience. Even more surprising were the events surrounding his registration to run. Arriving at the Interior Ministry minutes after the deadline had passed, Bazrpash was met by closed doors. After insisting and persisting, he managed to get inside. Once there, Bazrpash announced that he would not be running for the presidency.

Ahmadinejad, a Principlist, and his former deputy Hamid Baghaei, both of whom registered for the presidential race as independents on April 12, further added to the drama. The former president and JAMNA had earlier announced their independence of one another, but they are nonetheless vying for the same voters.

It is not clear which conservative candidates will ultimately be approved by the Guardian Council, with the Interior Ministry not due to announce the final list until April 26 or 27. What is clear, however, is that there is a good chance that Ahmadinejad and Baghaei will be barred from running given the lawsuits filed against them alleging administrative violations while in office.

On April 16, judiciary spokesman Gholam Hossein Mohseni-Ejei said, “The file against Ahmadinejad is still pending, and no final verdict has been issued for him yet. The case against Hamid Baghaei has not been closed either, and his innocence or guilt has not been definitively established.” Although the Guardian Council acts independently of the judiciary, Mohseni-Ejei’s comments — which included the caveat that an ongoing legal case does not preclude one’s candidacy — could influence the council’s decision.

Even without the Guardian Council's finalized list of approved candidates, the electoral scene already looks set to be intriguing. The Reformists have tried to paint Raisi as their major opponent and the consensus candidate of the Principlists, although the conservatives have not yet anointed him. Of interest, conservative media — in particular the key dailies Kayhan, Vatan Emrooz and Javan — gave little coverage to the news of Raisi having registered to run.

On April 9, JAMNA member Seyed Mohammad Hosseini, who served as culture and Islamic guidance minister under Ahmadinejad, told the conservative Tasnim news agency, “All [of JAMNA’s final five] candidates have announced their willingness to drop out in favor of JAMNA’s consensus candidate. One of the paragraphs of [the founding statute of] this coalition is that when a final [consensus] candidate is chosen, the rest must withdraw.”

Whether this will actually happen remains to be seen, especially considering that Principlists have in the past refused to do so. For instance, in the 2013 presidential race, the conservatives failed to agree on a consensus candidate. Only former parliament Speaker Gholam-Ali Haddad Adel stood aside, with Ghalibaf, Rezaei and Ali Akbar Velayati, foreign adviser to the supreme leader, continuing with their campaigns.

Given the serious conflicts within the Principlist movement and the lack of consensus over even Raisi, it appears unlikely that the camp’s leading candidates, especially Ghalibaf, will drop out in favor of a fellow Principlist, most likely Raisi.