Is Tehran's mayor lobbying to be only conservative candidate?

While Iranian conservatives claim to have forged unity, a closer look indicates the opposite as Ebrahim Raisi’s supporters believe Tehran Mayor Mohammad Bagher Ghalibaf is maneuvering to sideline him. 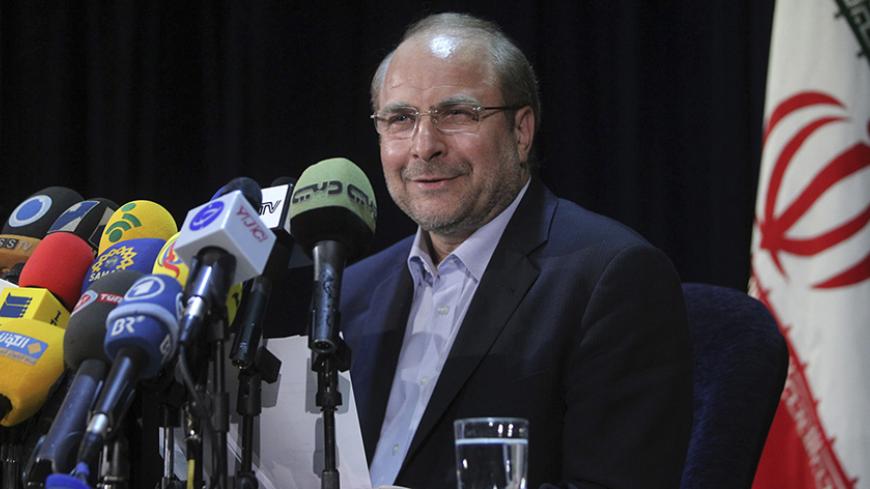 The two main conservative candidates seeking to unseat incumbent Hassan Rouhani in the May 19 presidential vote are Ebrahim Raisi and Mohammad Bagher Ghalibaf. Despite their claims of unity ahead of the elections, a closer look indicates that the conservatives are deeply divided.

Ghalibaf, the Tehran mayor who has now registered to run in three presidential elections, looks determined to stay in the race to the very end, mindful that a third-time defeat or withdrawal would lead to a further decline in his reputation. On the other hand, now that Raisi, the custodian of the holy shrine of the eighth Shiite imam, has risked his future political career and reputation by stepping into the fray, he is also not likely to pull out in favor of a starkly different figure such as Ghalibaf.

On April 6, the Popular Front of Islamic Revolution Forces, which is known by its Persian acronym JAMNA, held a primary in which five contenders were elected. Raisi obtained the majority of votes in the primary of the conservative coalition, while Ghalibaf came in third.

Abbas Abdi, a prominent Reformist analyst, said April 18 that neither Ghalibaf nor Raisi will leave the competition in favor of one another, adding that supporters of the two candidates will rather clash during the presidential race.

Indeed, following his registration for the elections at the Interior Ministry on April 14, most conservative dailies notably did not feature Raisi on their front pages, arousing criticism and doubts among his backers. Supporters of Raisi, who is being backed by key hard-line cleric Ayatollah Mohammad Taghi Mesbah Yazdi, believe that Ghalibaf is lobbying within JAMNA to persuade the forging of a consensus around him, and the coalition’s eventual announcement of him as its only candidate.

Osoulgara News, which is close to former chief nuclear negotiator Saeed Jalili, wrote April 17 on its channel on the popular messaging app Telegram that Ghalibaf is reaching an agreement with JAMNA behind the curtains, and that this explains why conservative newspapers have neither backed him nor covered developments related to Raisi on their front pages. Rumor has it that despite announcing his candidacy as an independent, Raisi is not keen on seeing JAMNA rallying behind Ghalibaf as its final candidate, as under this circumstance, the pressures for his withdrawal would intensify.

Meanwhile, Mohammad Hashemi Rafsanjani, a brother of the late Ayatollah Ali Akbar Hashemi Rafsanjani, the former president who died in January, will apparently also run for office. He said April 18 that his brother had advised him, head of the supreme leader’s inspection office Ali Akbar Nategh-Nuri, Vice President Eshaq Jahangiri and Foreign Minister Mohammad Javad Zarif to register to run in the presidential elections. Of note, Ali Akbar Hashemi Rafsanjani believed that the moderates and Reformists should have alternative candidates in case the Guardian Council, which is tasked with vetting hopefuls, disqualifies Rouhani.

Mohammad Hashemi Rafsanjani, who has previously served as chief of the state broadcaster, said April 18 that he does not intend to challenge Rouhani. In this vein, according to Reformist activist Abdollah Naseri, Rafsanjani and other moderate and Reformist candidates have come forward in the event Rouhani is barred from seeking a second term.